Yesterday and today we visited my wife's in-laws in NE KY. Often I take my bike, but this morning's forecast was for mid-20s and I just wasn't feeling the bike thing. Instead I took some hiking gear, and this morning while everyone soundly slept, I did my early thing and drove down to Blue Lick State Park, which is about a 25 minute drive from the house. I was able to connect a few different trails and put in about 5 miles total, and along the way I had a nice time doing some birding. I was out for 3 hours in temps right around 30F, but I managed to dress very well, and aside a little occasional headwear adjustment, I was comfy the entire time. Following are some images, as well as a list of the birdies I saw. 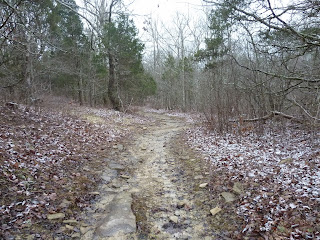 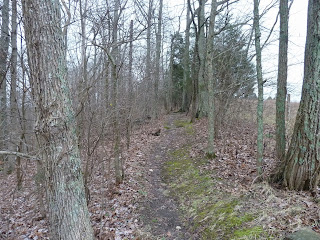 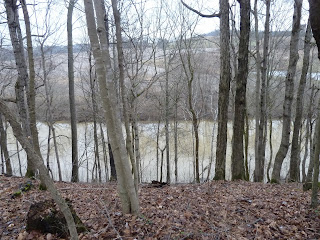 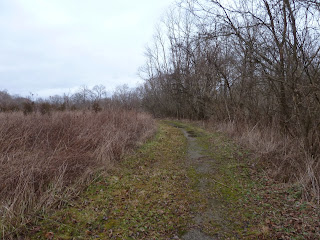 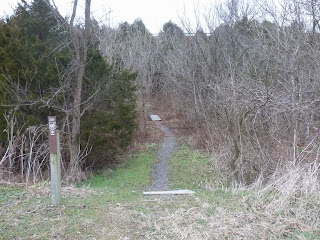 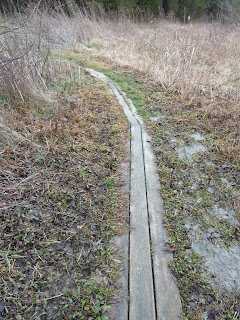 I would say it was a Sparrow and Woodpecker day. I still have doubts about my sparrow IDs, but it's my list and my blog, so there! I had a big problem, too, in a thicket below 68 (obvious pic above) in which I saw lots of little brown or dark birds that weren't sparrows, but I couldn't really tell what they were otherwise. I assume they were vireos and warblers, but who knows? No me.

Very spur of the moment (well, one day in advanced) we decided to pop off a mid-HolidaysMayhem-get-out-of-the-house S24O. Not much to say, really, except that it might have been my favorite S24O for whatever reason. The route was a tried-n-true, leaving us few difficulties save some dark (early) skies on the out leg. Once set up, the food was good to great. Timothy brought chili fixings and did it all up on his Trangia. I used my mini-Trangia for some ramen and chicken. Patrick bought a couple kinds of sausages on the way out and we grilled those in the very hesitant campfire (which slowly came to life after we foraged for some drier wood). Dave made soup on his Esbit. That said, we all shared in the various dishes, including some of Timothy's bread and a bar of nice dark chocolate I had brought, and the very good beers Dave and Timothy brought too. After eating we stood closely around the fire and stayed warm from a somewhat biting wind coming from the south. Our smart toys claimed it was around 40F, but it felt a bit brisker than that. 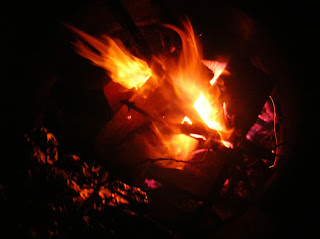 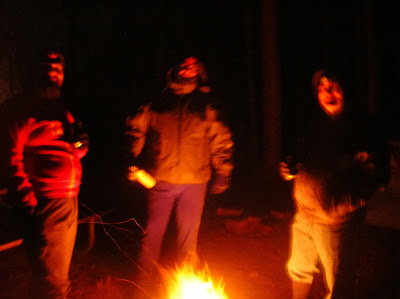 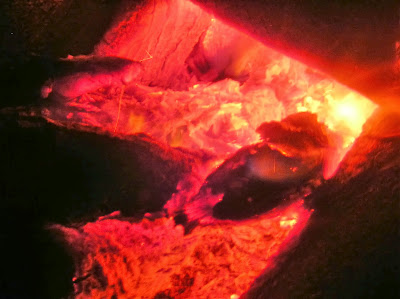 Timothy and I both slept in bivvys and I was pretty pleased all in all. Yes, I was an uncomfortable as ever, but aside a mid-night nature break, I stayed in my bag in the bivvy for practically 9 hours, so it must have not been too bad. In the morning, Patrick fired up his stove and we made coffee as we packed up, with the 2 bivvy guys being packed up much more quickly. I wouldn't want to tour in a bivy, but I think it's perfect for a S24O. We bombed down the hill in the cold and worked out way back to the Loop, this time taking a route with a few climbs to get warmed up. We finished up with a hearty, warm breakfast at The Twig-n-Leaf, as often the case.  There isn't any one factor to make it any different from other S24Os. It just worked. Glad to have made the effort. 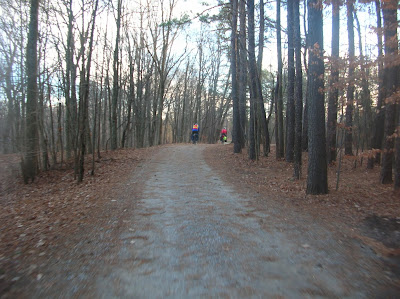 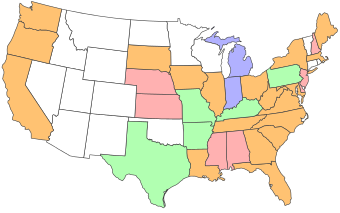 A bit of an East/South bias. Some of these states are from college choir tours. It's pretty imprecise, anyway. I feel like I visited some more or less or I don't really know. I've actually done more *traveling* in Spain than I have in much of the U.S.  Hindsight I would probably bump Florida to blue given several trips down there.

A lot of white, with lots of forests, trails, mountains and sights available.
at December 23, 2013 No comments: Links to this post

Dave and I took fat rubber up to Muscatatuck to roam around. PJ was supposed to go, but some stuff waylaid his plans.  The various recent storms suggested that this area had more snow as opposed to our sleet, so I assumed there would be 6"+ of snow of the ground. Instead we found the roads ice-bound, with trucks having packed down the snow to an icy mess, and as the pics depict, much of the what should have been a 6-10" base had whittled down to crusty slush. We had to ride along the very outer edges of the road to avoid the ice, which poor David didn't early on. Ouch!

After that we took to the paths for some off-road rambling. The Mukluk was getting the job done, but Dave's 2.2" Contid on the Fargo actually did a better job cutting through the crusty snow. Along the roads we used the Mukluk as an ice breaker. Forward Ho!  I did a little birding which is listed below. Afterwards we visited the customary Waffle House for our post ride.  Good stuff, I can't deny. Maybe the best of the week 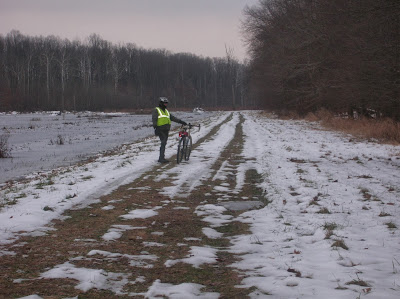 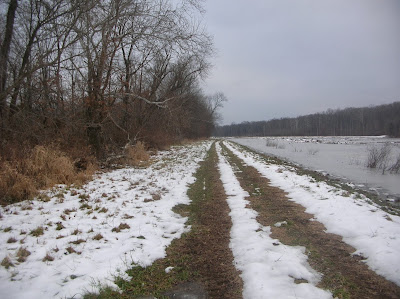 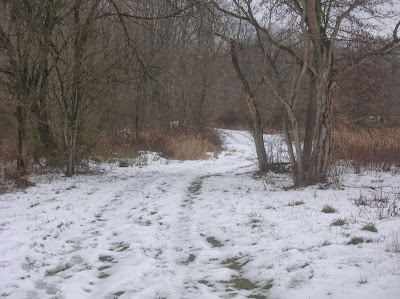 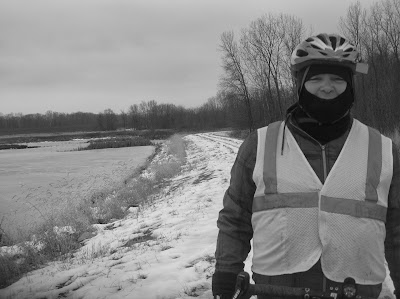 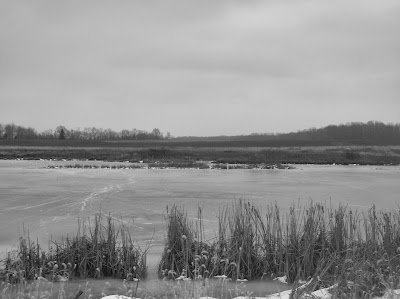 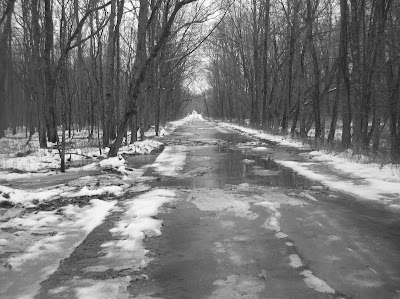 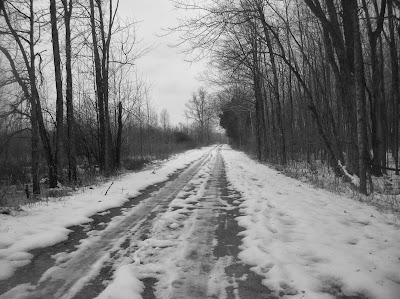 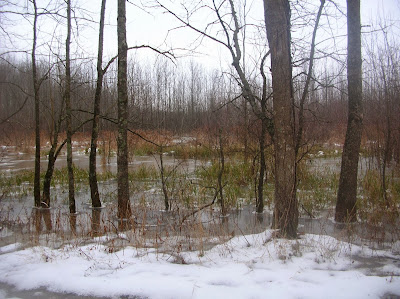 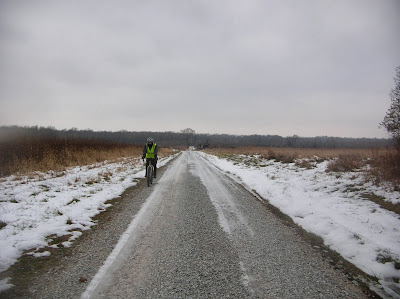 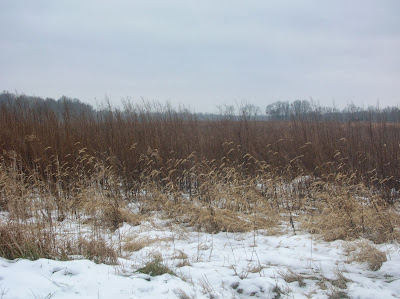 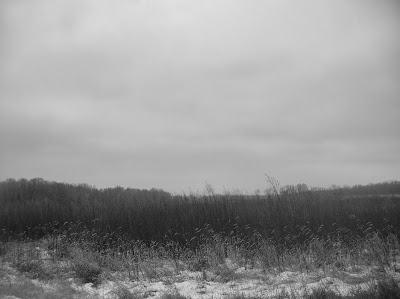 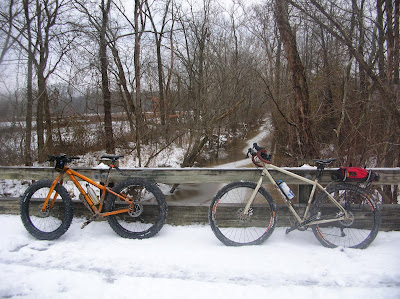 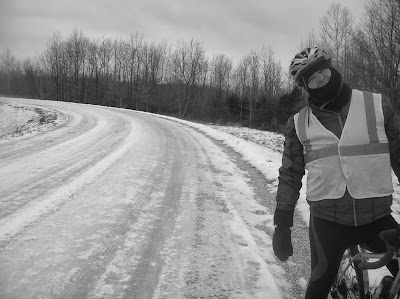 Dark-eyed Junco (1st sighting)
N. Cardinal
Downy Woodpecker-3
C. Chickadee
W.B. Nuthatch
G.B. Heron
Sandhill Crane-1  (squawking singleton lost from the posse)
A.Robin
A.Crow
C.Goose
Hawk- too far to ID-Innumerable hawks along I-65, too
lots of little brown birds I couldn't get a look at without glasses or binocs (which were erroneously in backpack, as I had forgotten to attach handlebar bag)