They cancelled school today for a forecast of late-afternoon snow. It's 2.42, well after high school, and there have been, perhaps, 10 total droplets of rain.

I went out and looked at some birds this morning. Here they are. Some are new to me:

And a usual mix of robins, cardinal, starlings, crows, and other little brown birds I couldn't identify. Same goes for the Eva Bandman area. There were cool water birds to look at, but the forest birds must have woken up from a slumber.
at February 14, 2014 2 comments:

Email ThisBlogThis!Share to TwitterShare to FacebookShare to Pinterest
Labels: Birds

I keep getting Fat

Brian from KYMBA, with whom I rode Saturday, texted me to see about interest in another ride today. Why wasn't I at work, you ask? Because the school system canceled classes with literally a dusting on the ground. This one was a legitimate mystery. Oh well. The temps will be rising soon, and with it will disappear the layer of winter we've had now for months.

We left from the riverfront and headed down the Rivewalk and out to Shawnee and back, sticking to snow on the way out and find some amazing frozen mud on the return. I don't have many pics, but it's hard to describe, really, the notion of rolling on a layer of icemudsnowfrostleaves, all on the 4" Nates. What a year to purchase a fatbike. Crazy. 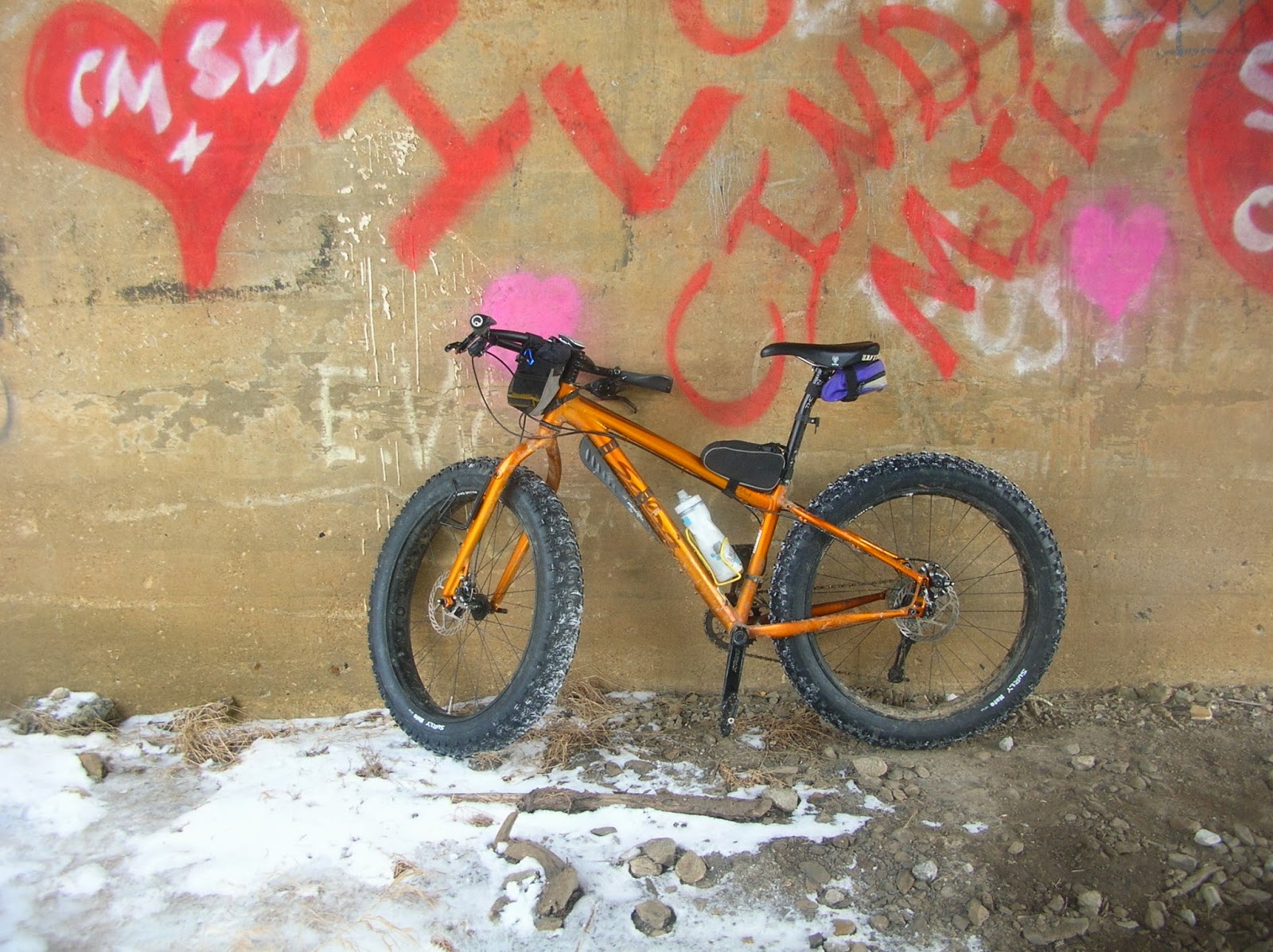 Mods today, with ugly seatpack and extra tube, top tube bag at seattube junction for personals, and back to shorter stem (with better headset adjustmet). Long stem was fine, but I'm keeping the shorter one. Cockpit was excellent. 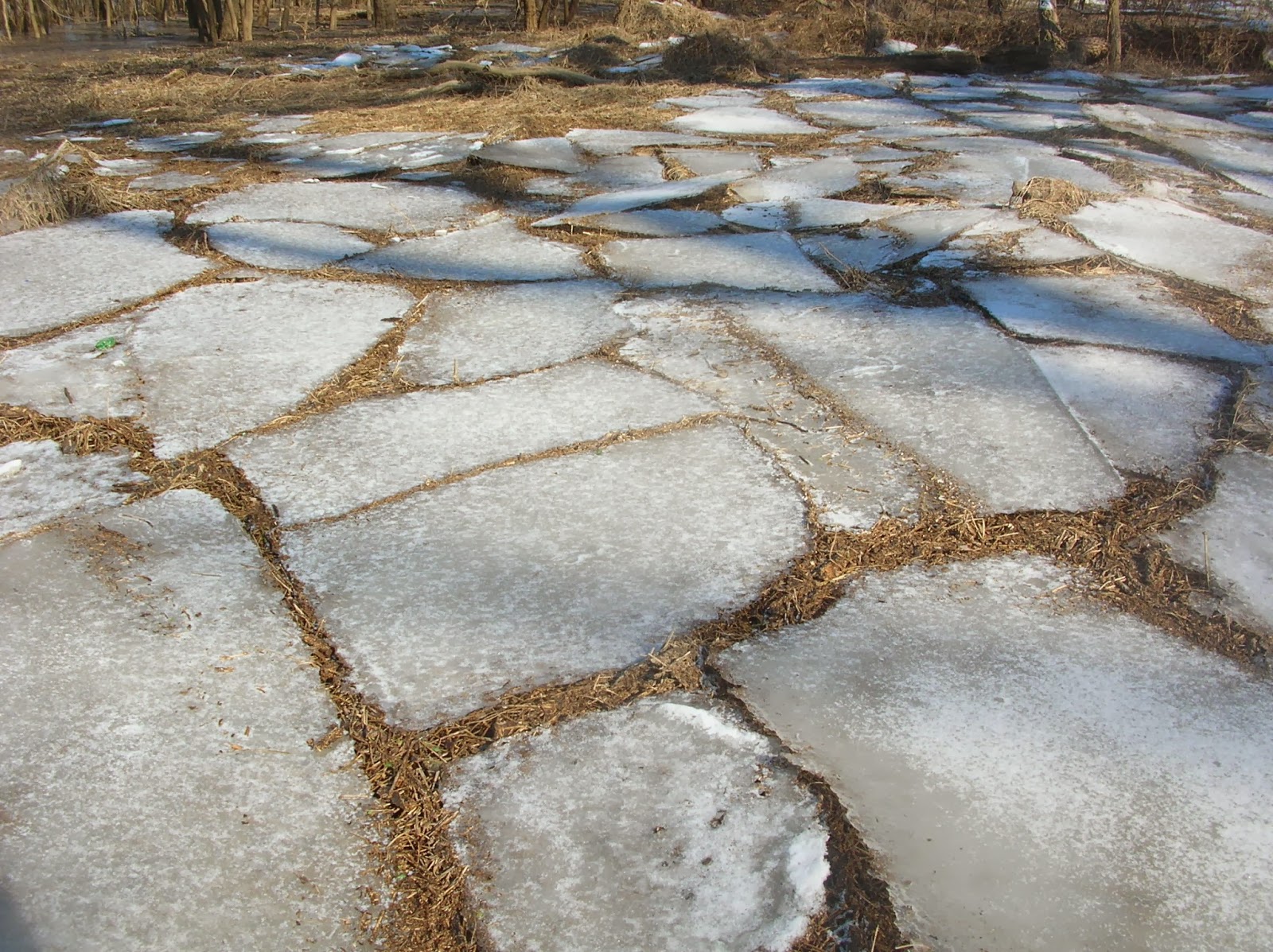 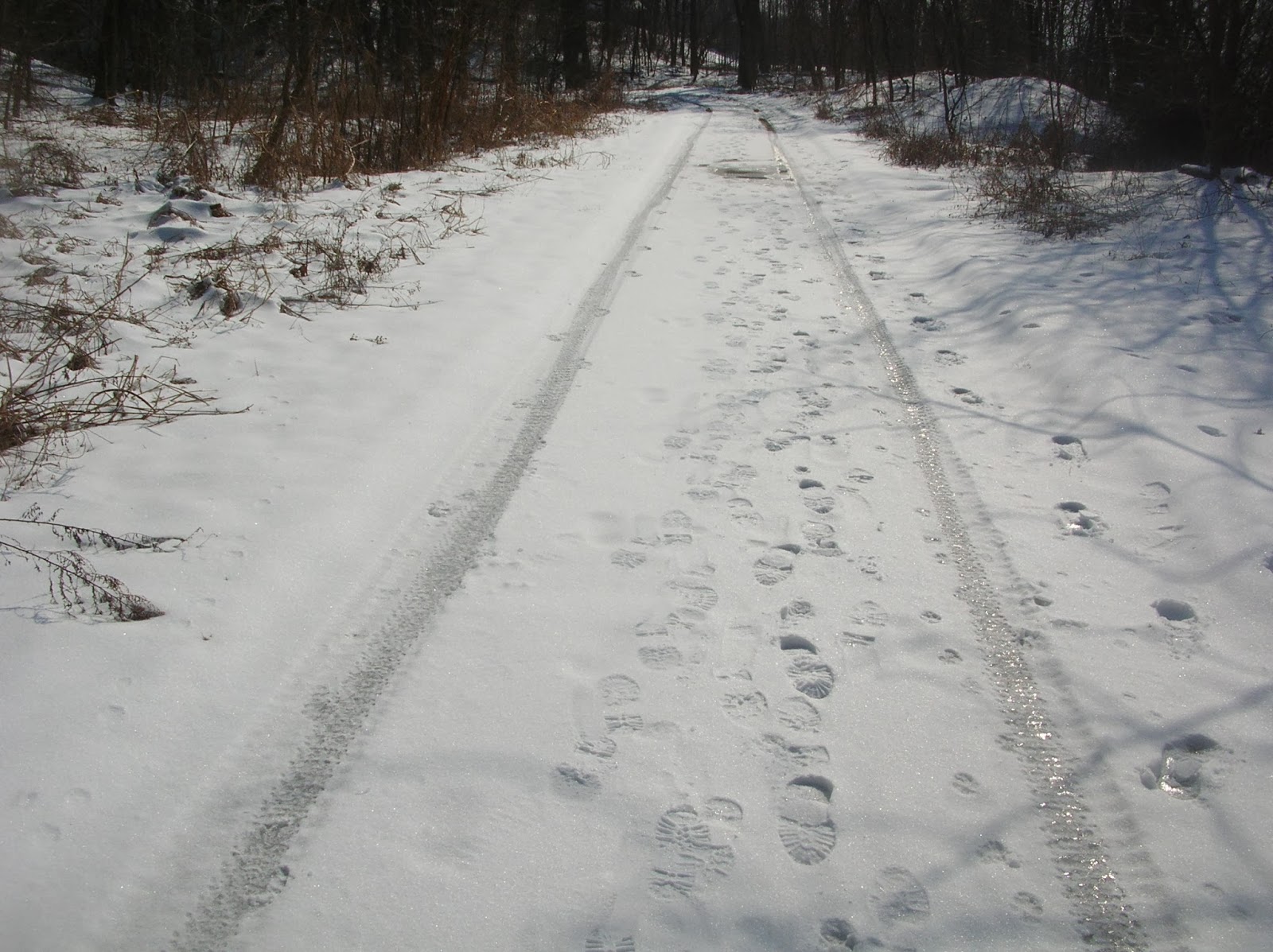 Hard, as well, to describe the sensation of riding along in those ruts on either side. At 25F, they were quite icy, so I often tried to find a snowier, safer path. They looked inviting, but looks can be deceiving. 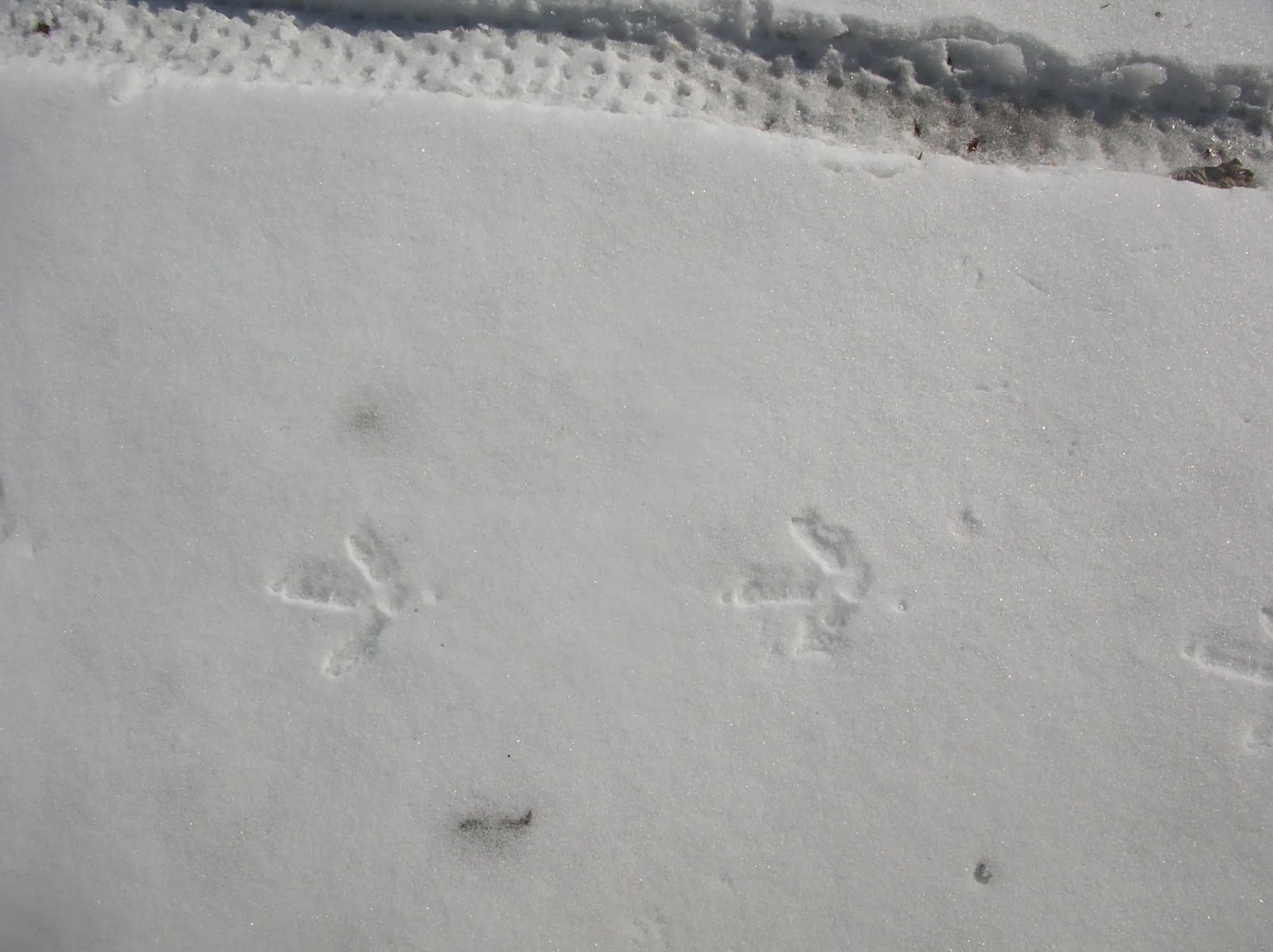 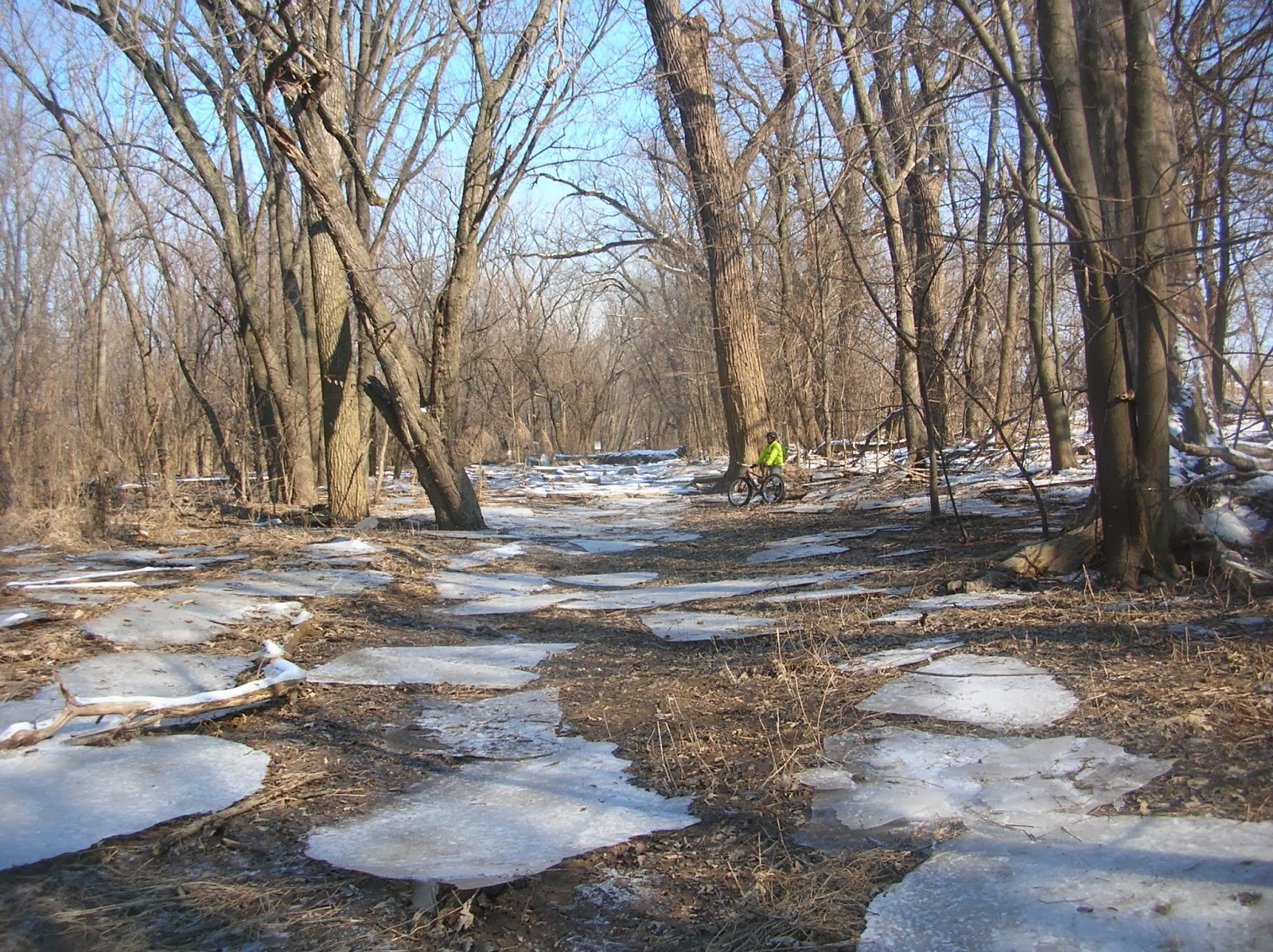 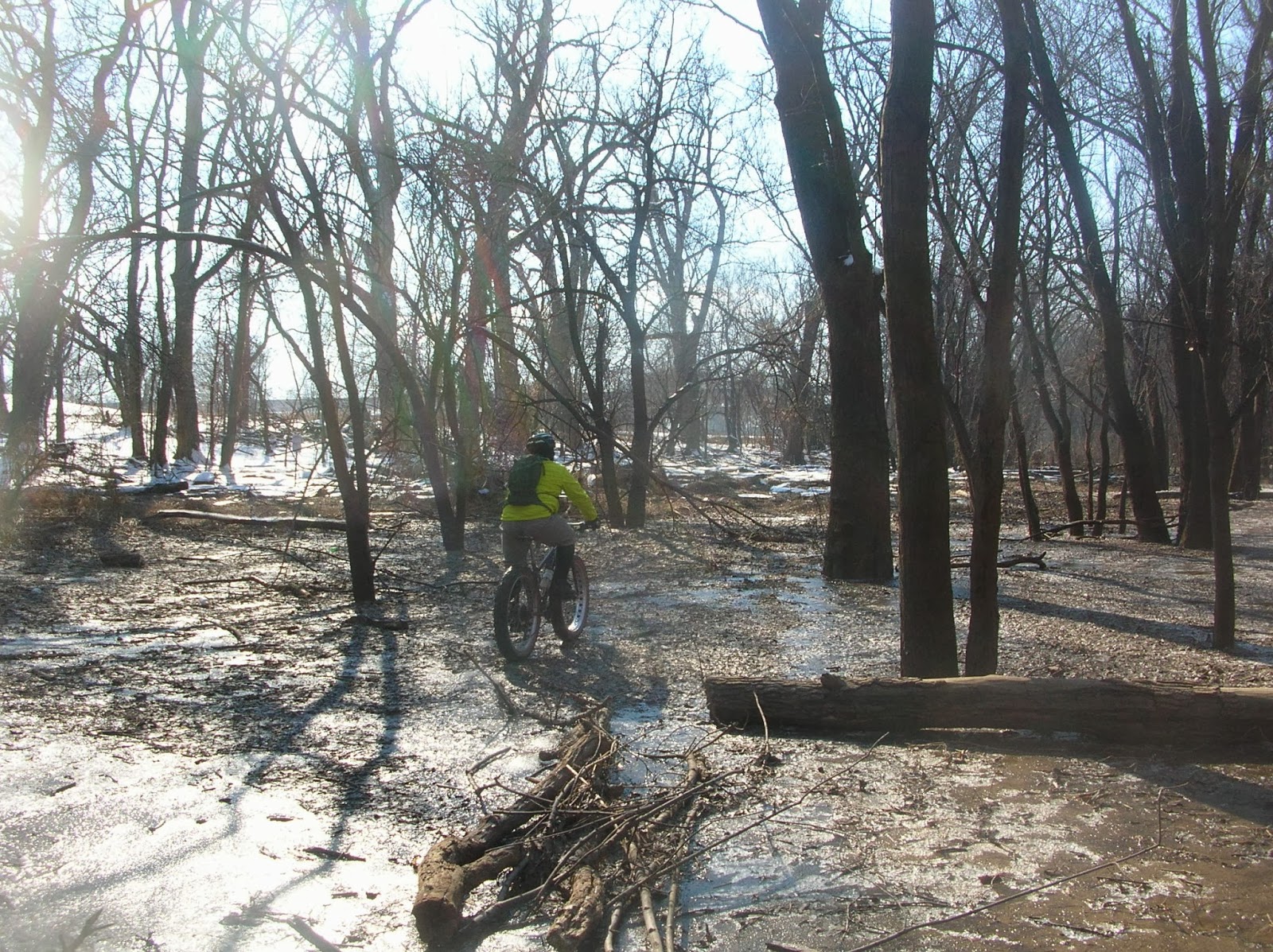 Brian riding on terrain that literally was *underwater* yesterday before the river receded last night. It's cold enough for the mud to firm right up, with a cool, crunchy glaze of rideable ice on top.

After going solo for most of my fattying, yesterday I rode with the KYMBA crew for a very chill, fun 20 miles across the bridge and through the terrain PJ, Dave and I inspected a month ago, only this time with plenty of snow, slush, and crust to negotiate. Of the 6 of us, we had 3 Pugs (SpecialOps, SpecialOps "retro", yellow shop loaner), a couple 29ers and me. Actually, on my roll down to the river I inspected a little nook along the much-graffitied railroad tracks which led to a service road of some type and then a bum camp. I'd say the options are somewhat limited there, but worth a look.

The crew was quite mellow and fun to talk to, assisted by the pre-ride growler, and certainly having more fatties around was entertaining. A few come from a more mtbiking background, so they were willing to try some maneuvers that I usually am not, including rolling the abandoned bridge that so far I have only been willing to walk in IN and rolling a huge ice blog run-up at our lunch stop, at which I endo'd and hurt myself, although not really. Nothing broken, on the bike nor on me.

The ride pace and convo-paced vibe on this crew- especially after 2 beers at Bank Street Brewhouse- reminded me much of my wanderings with the usual crew. It seems that fatbikes and gravel roamers coexist in the non-racing world of bicycles. I know I can't get out next Saturday, but I hope to do some more funfatbiking with this crew.

(This entry is poorly worded. Must be my injuries. Or laziness.) 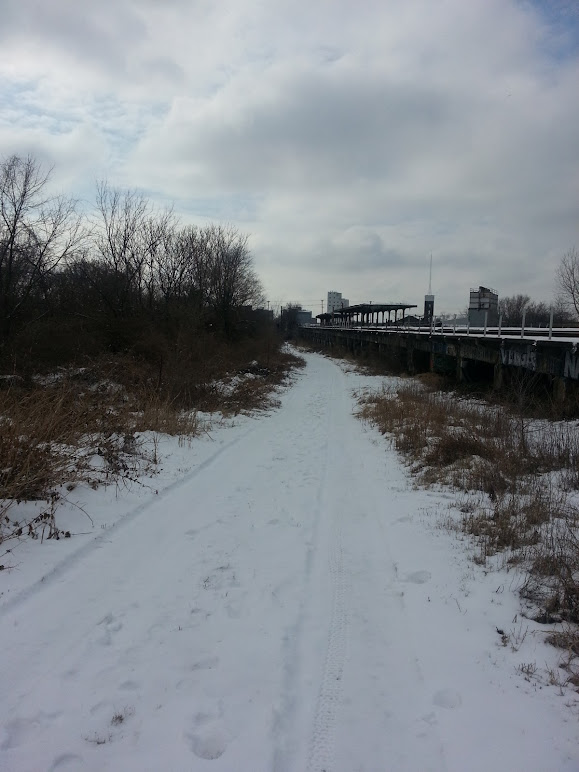 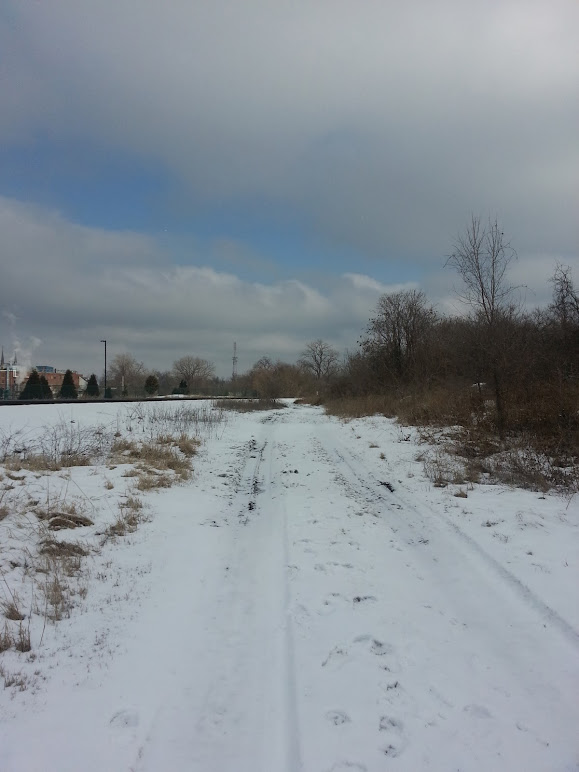 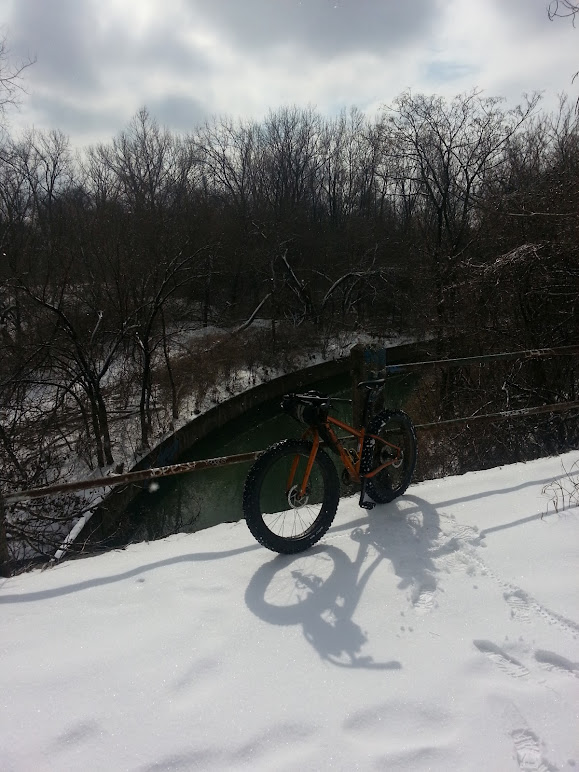 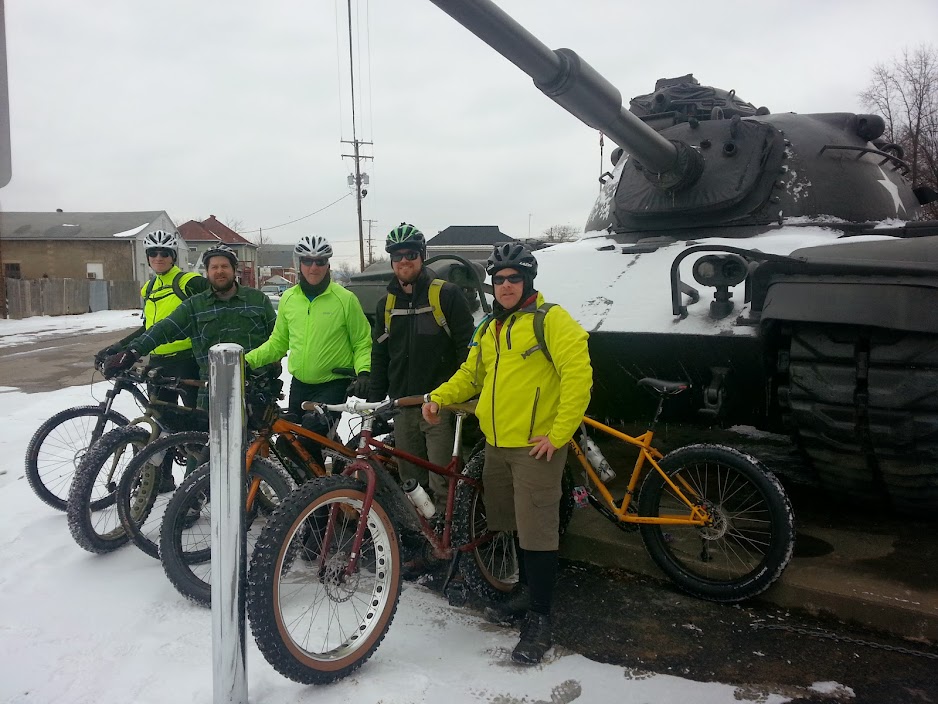 We got a nice 3-5" last night, so this morning that meant no school and more fatbiking. I did the usual tour through Seneca and park of Cherokee trails. For some reason, maybe tire pressure, maybe depth, maybe #excuses, I had a good-but-tough time. The snow seemed sort of wet and heavy, so I still don't know whether to drop pressure or add to make things flow better. I have a feeling I have better traction than the skinny bikes, but I'm not so sure I make faster time.

I might just sneak back out later today. It's sunny, relatively warm at 32F, and #outsideisfree. 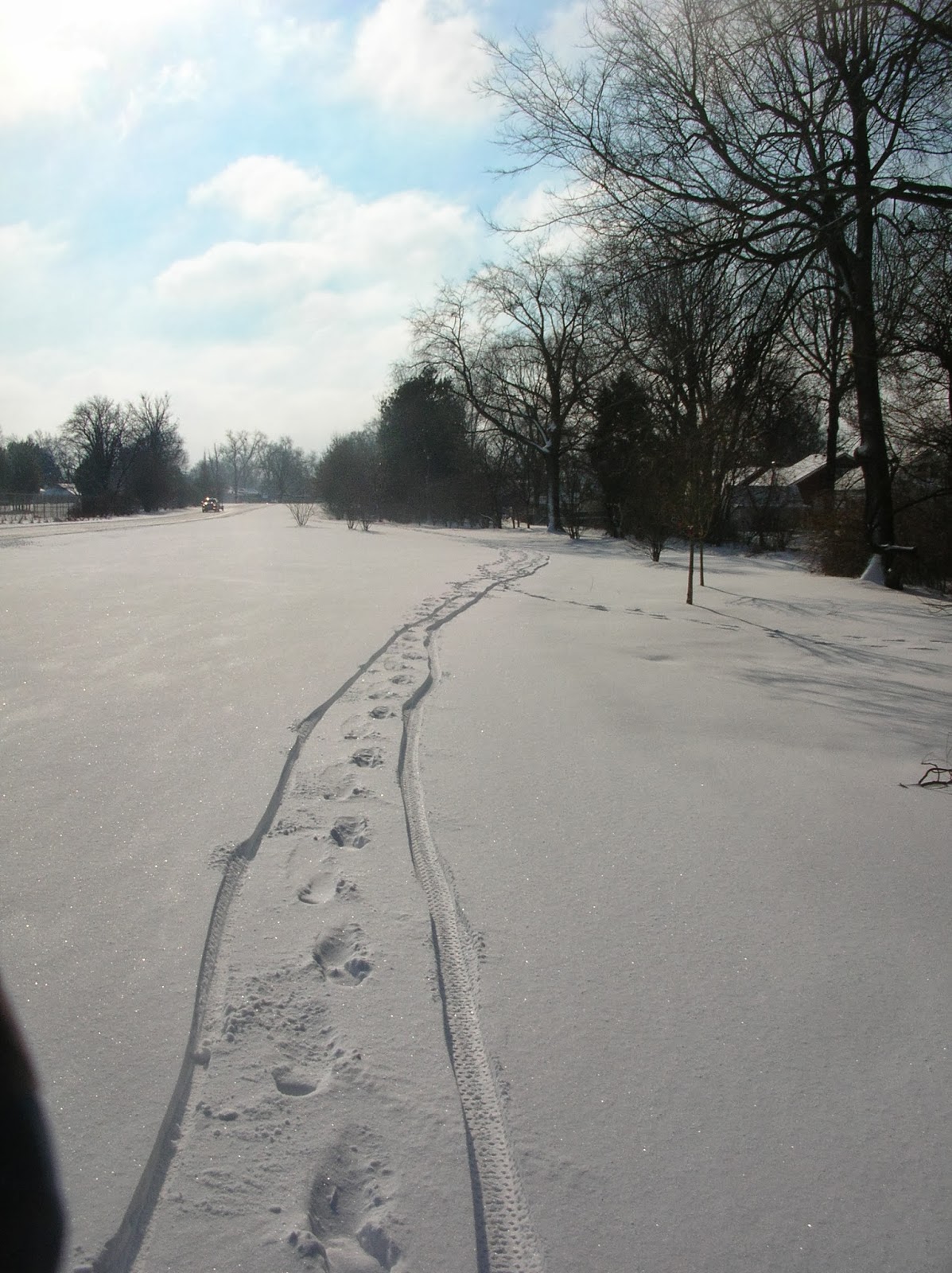 Having issues with old camera with shutter. Dumb. That's my track to the right as compared to a 29er what rolled through earlier. 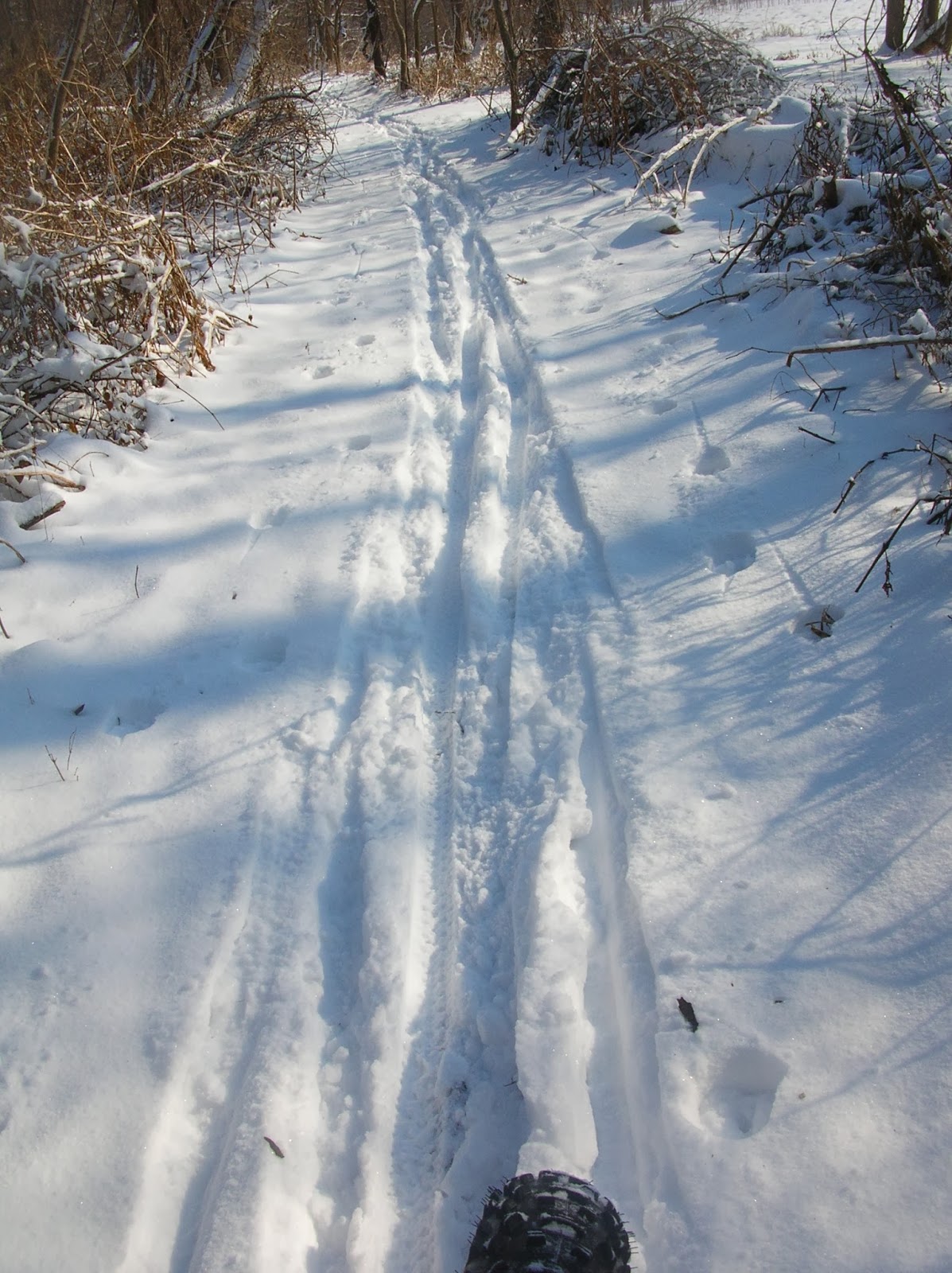 Fattie rolling through mixed trail after a few other skinny bikes. 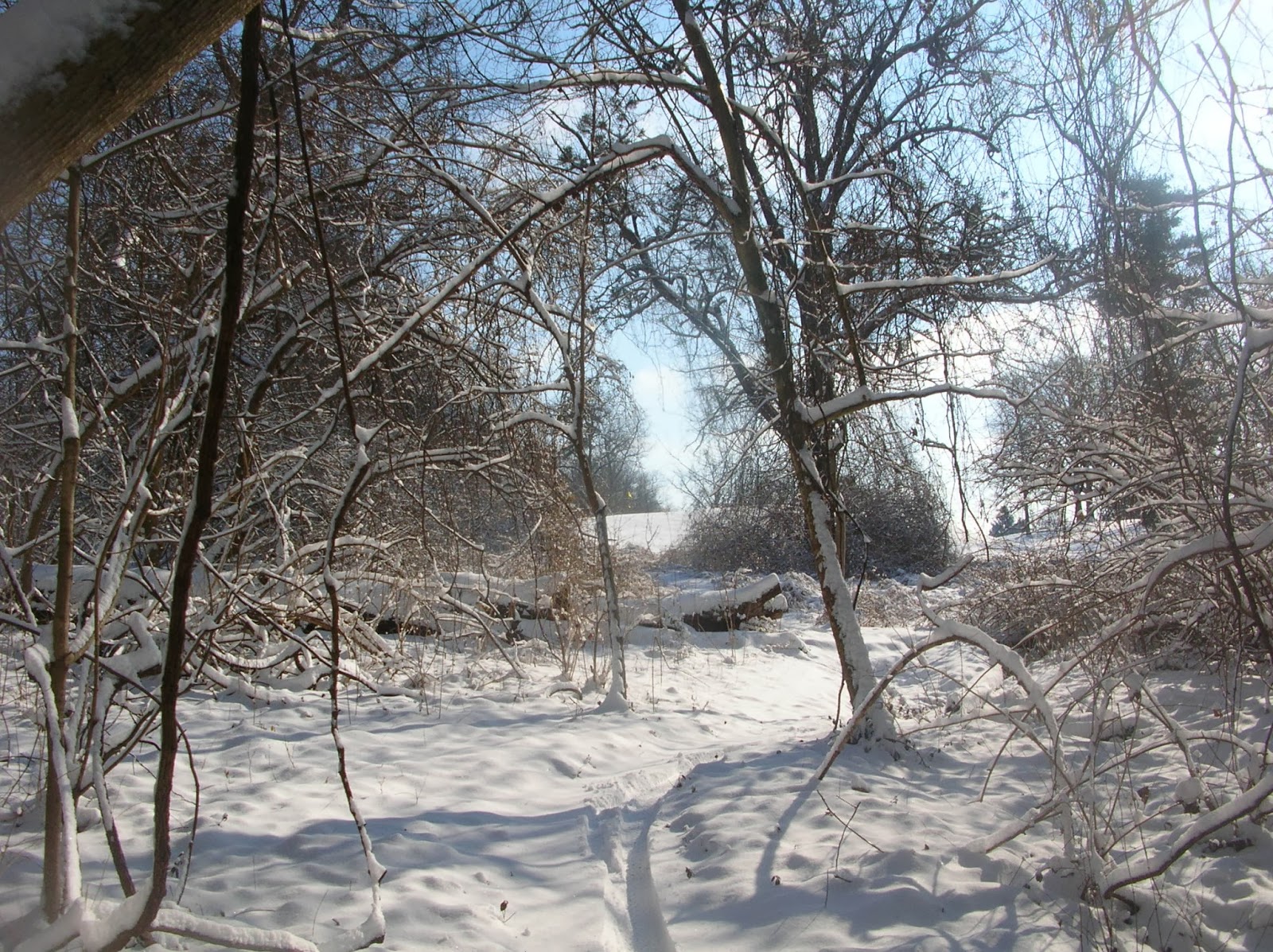 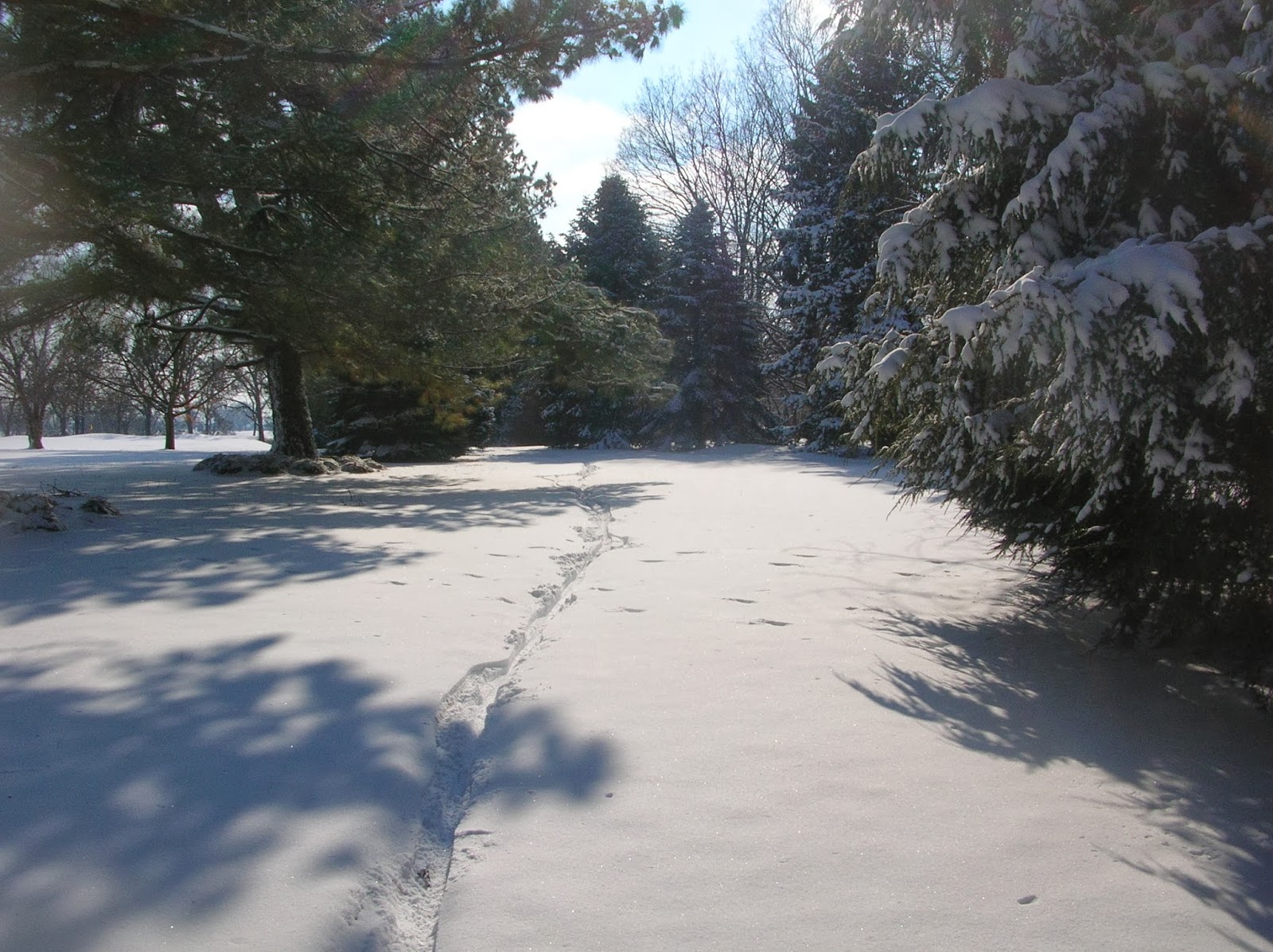 This section down along the west golf course was sort of funny, in that when I followed the skinny tire tracks I found myself a little off-kilter, so instead when need I found a better line just plowing. 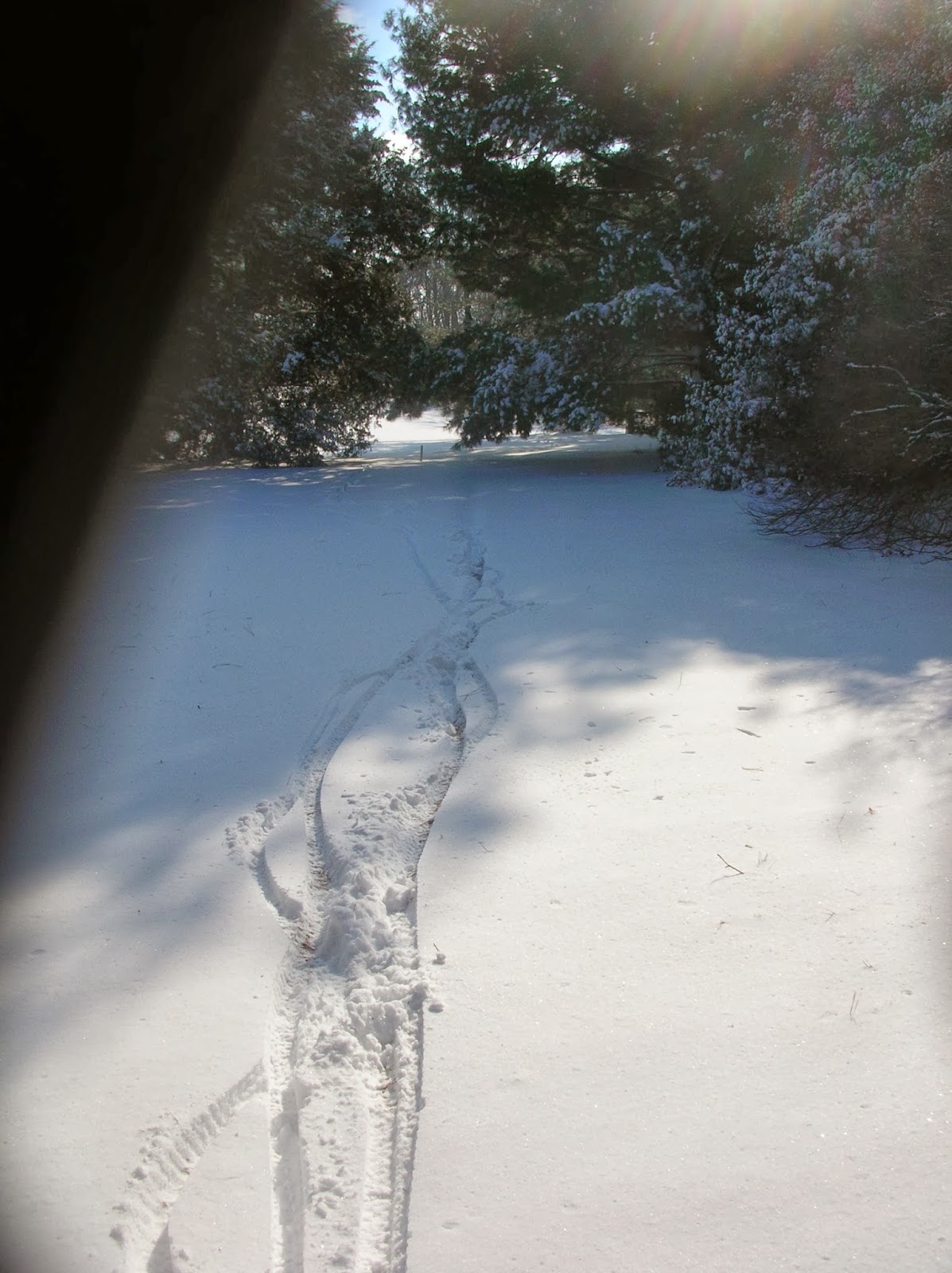 Shutter issue, but you can see the skinny tracks occasionally having trouble. I didn't have much trouble. 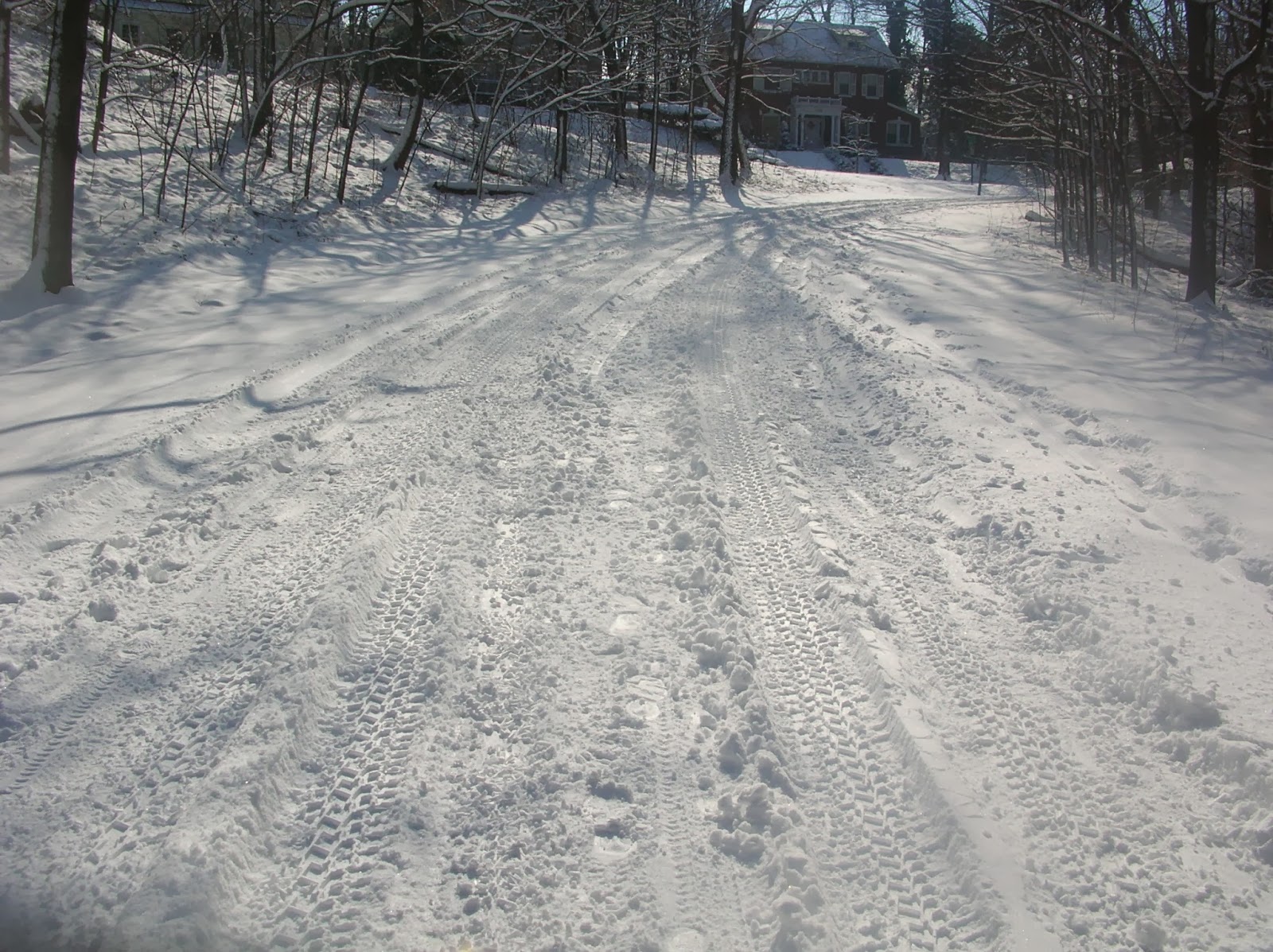 Road climb out of Cherokee populated by different fat tires, of the motorized kind.

Rolling was interesting today. Once I hit the Cherokee trails I found that fighting through the walker tracks was really tough, laboring. I also lost some traction too along the trails in the thicker snow. So, do I drop even more? I have a feeling I was around 10psi. Some people will say, "Drop!", but I'm a big dude. Let's keep that in consideration.

I'm tired, but I really could go out again. Derek from OYLC  and Brian from the Kentuckiana Fat Bikes FB page and KYMBA were going out today at 12 and I couldn't make that due to family considerations, but I really do want to connect up with that crew sometime. Damn better than being at work.

Almost 60F today. Windy, but some sun peeking through. Had to take advantage. Not great and back bothering me, but better than the couch.

First ride on My Precious since November 30. Maybe not so precious. Actually, pretty good.