It's that time of the year, the tennis time of the year.  This past weekend on Saturday I arranged to ride with someone but he couldn't answer the bell, so I did a nice solo 21 miles on Seafoam under some sunny skies. I topped it off with a coffee at Quills where I people watched as revelers prepared for the St.Patty Day Parade. Green and beering it up at 10am. Mmm good.

Sunday I met PJ at his place, this under much more questionable conditions, what with the 35F and gale force headwind from the east. Brrr. We plodded over to Sawyer park and explored the trails a bit (looking for a stealth camp spot. Shh.), took the Anchorage Trail for the first time, and then to Anchorage Cafe for coffee, quiche, and lots of man talk. The return, fortunately, involved more tailwind. That said, I was really glad that I wasn't on a metric that day. 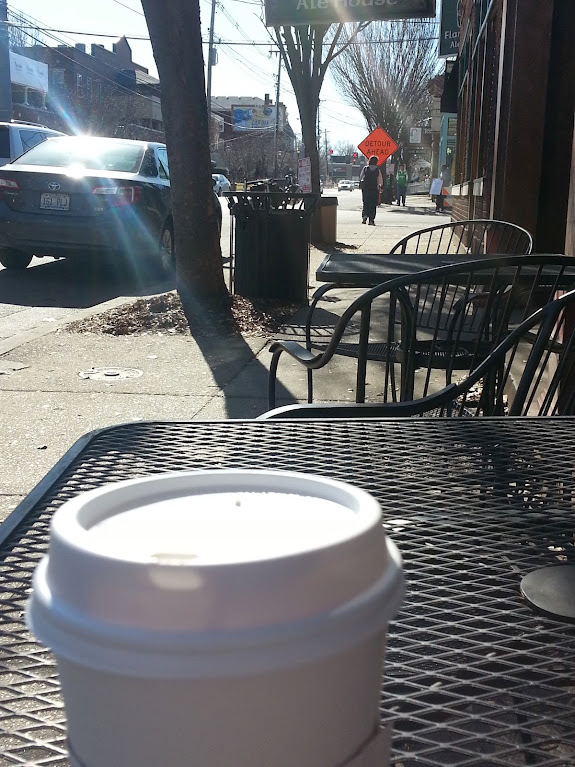 That's Seafoam peeking from behind the trash can. Noodles and different seatpost have transformed the Atlantis.
at March 18, 2014 1 comment: 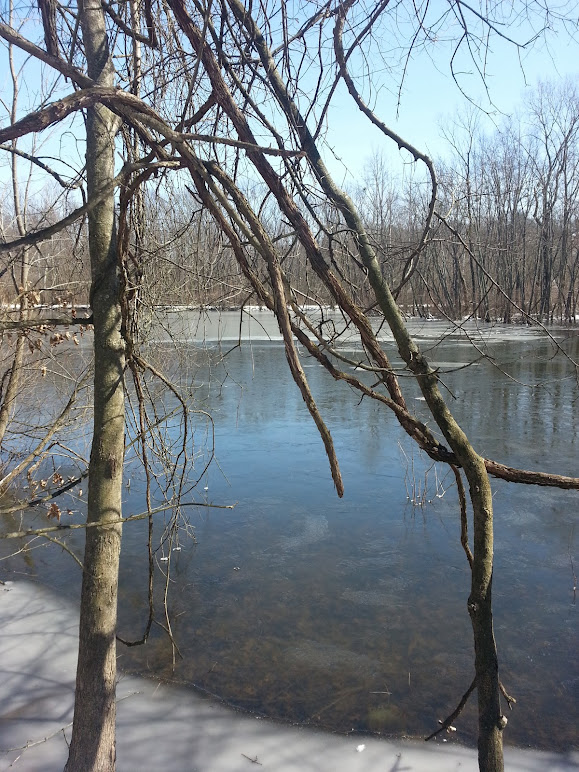 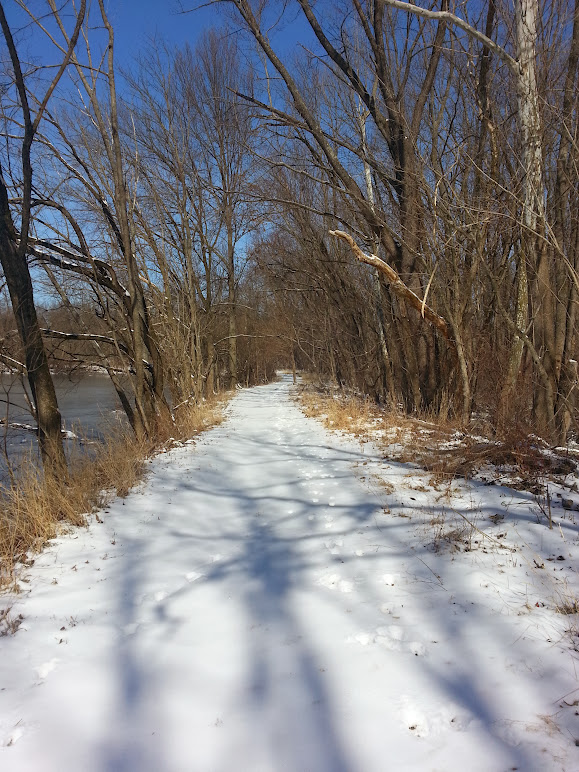 Yet another snow day due to icy road conditions. With the amount of black ice I saw this morning, I decided to not ride and instead took a couple different walks to keep myself occupied.

The first was some mid-day walking and birding. I started at Caperton Swamp, my favorite spot (along with Loop Island). Things seemed quiet at first but over time picked up, especially I approached the meadow which gets so much action in the summer:

Pileated Woodpecker
Red-bellied Woodpecker
Downy Woodpecker (male and female)
White breasted Nuthatch
Carolina Chickadee
Carolina Wren
Golden-crowned Kinglet
A.Robin
Dark-eyed Junco
Turkey Vulture
Song Sparrow
*other sparrows
*damned raptor I didn't ID. I had a good look and just didn't get enough info. Brown and striped like all the others this time of year. Probably not a red-tail, though
Surf Scoter (across from C.S. in Ohio)
White-winged Scoter ((across from C.S. in Ohio)

I moved on to roam around Thurmin-Hutchins Park a bit but other than some C. Geese and 2 Mallard Ducks there wasn't much going, so I moved on down to the EvaBandman Cyclocross Park. As is often the case, there are usually some interesting things happening down at the confluence of Beargrass Creek and the river:

American Coot
Common Merganser** a first for me
C.Geese
Double-breasted Coromorant
Bufflehead
Ring-necked Duck** another first
Killdeer- one hanging out next to the road as I left

I headed over to S.Indiana to see if I could find the long-tailed ducks folks have been writing about, but to no avail. I saw more Buffleheads and some Mallards. Oh well. I'll live.  Once I returned home I eventually headed back out for a 4-mile walk behind the zoo and through Joe Creason. Now I'm home, ready for some supper, and will probably sleep soundly after a day well-spent taking in the sunshine (albeit temps that barely topped freezing).

Another 2-4" of snow, sleet, ice and stuff. Another snow day out of school. Another lost day of summer.

Another snow ride, this about an hour. I didn't have good legs, good mojo. It was very windy out of the north and the snow had a mashed potatoes vibe. It wasn't easy, and I didn't get out for an "epic" ride, but I did get 70 minutes of exercise, which is better than the couch. 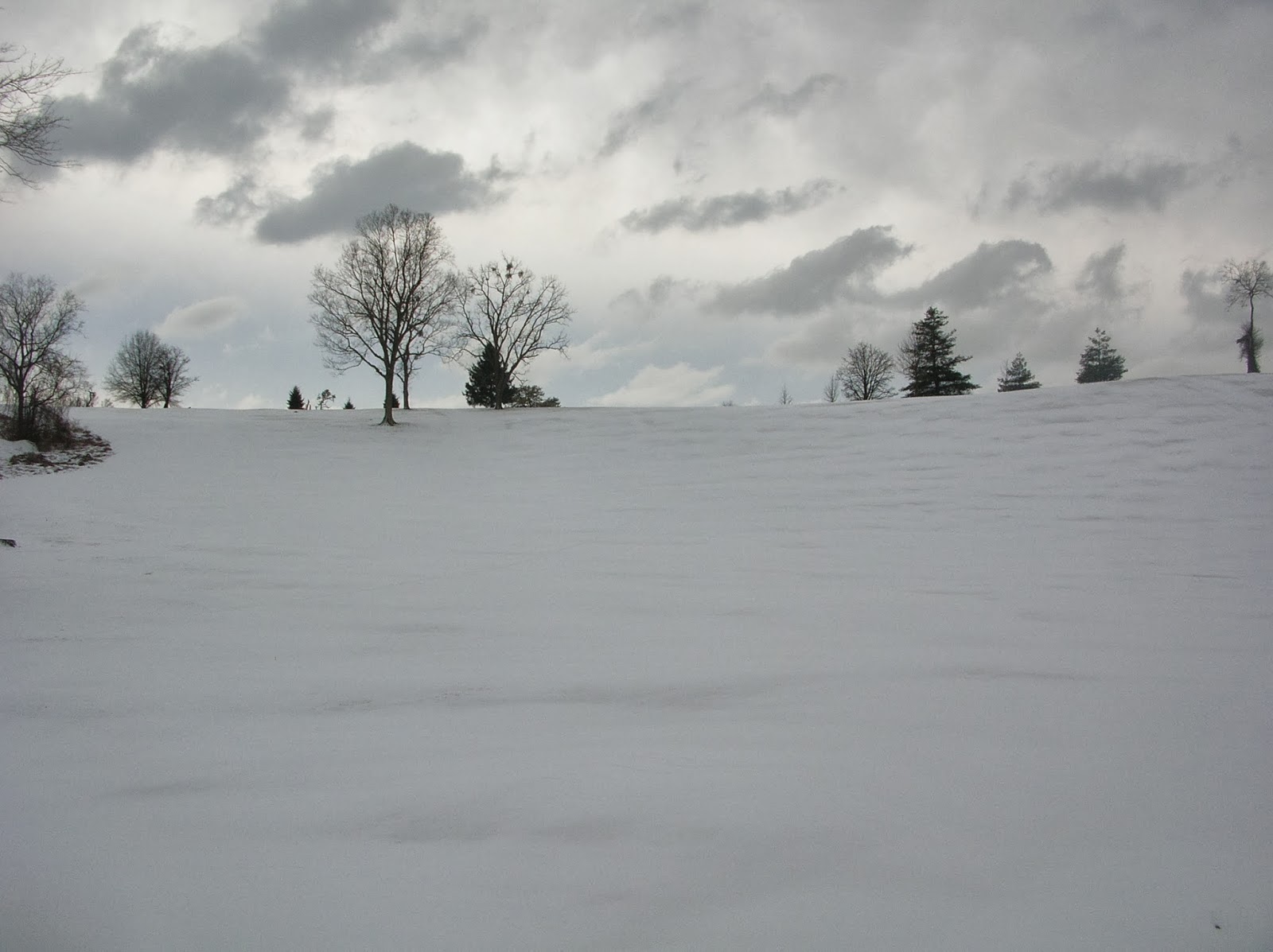 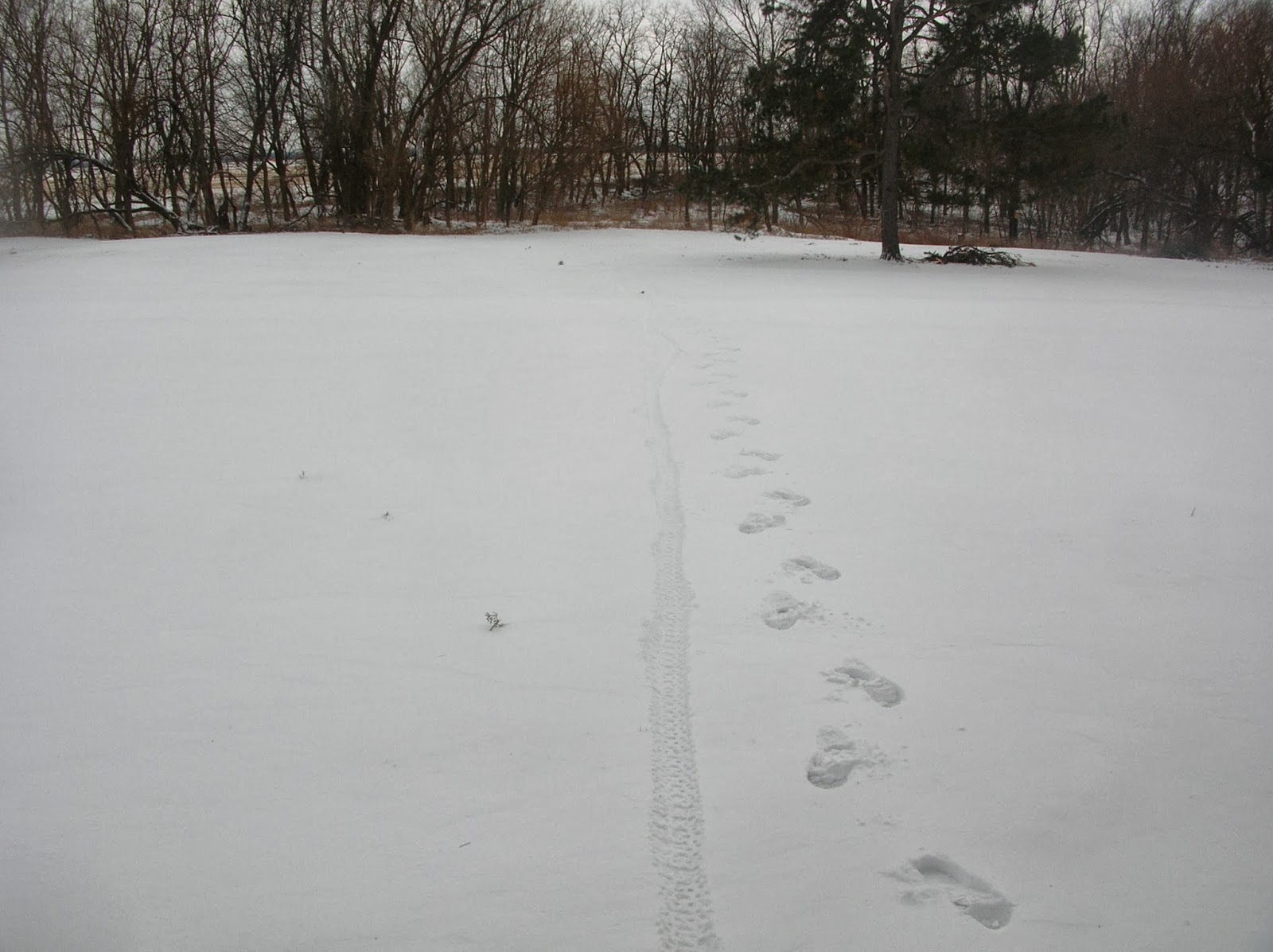 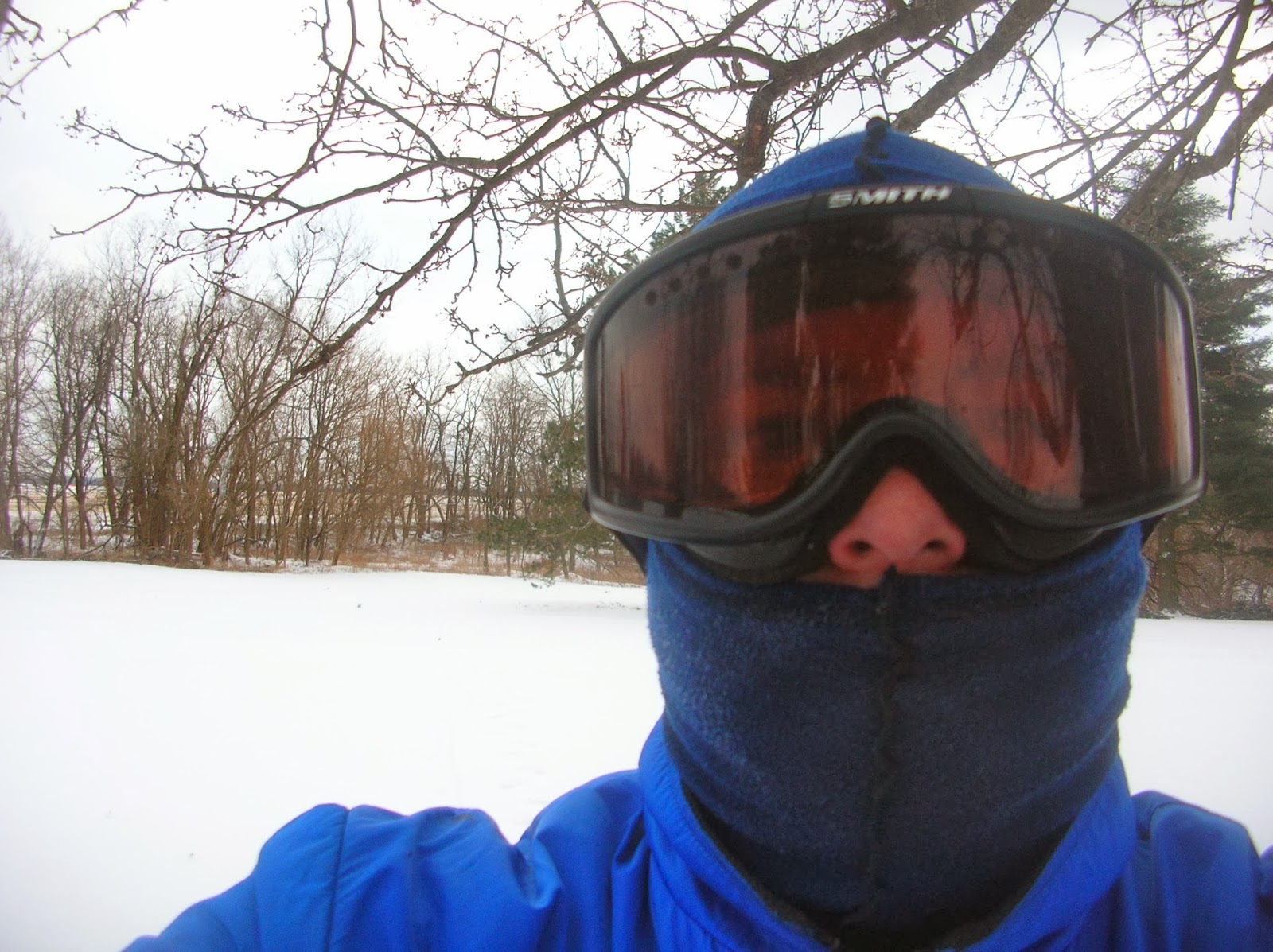 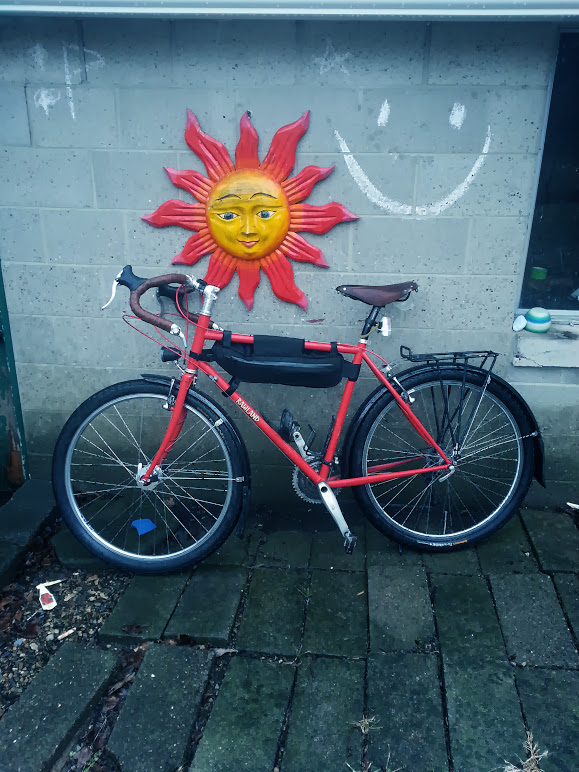 David and I rolled out for a coffee this morning, both of us needing to stretch the legs with this crazy winter. Yesterday was a very nice one in Louisville, with temps above 50F, and a mild, Spring-like feel. Instead of riding I dithered and dathered, finally ending up with a nice walk with the wife in Joe Creason Park. Nice.

This morning, though, we are awaiting Snowmageddon III or whatev, with ice and heavyish snows coming our way. Or not. The Ohio River has an interesting and profound effect on weather, and often spares us the winteriness that S.IN. experiences. That said, while waiting for Dave at Breadworks, God began crying in earnest. By the time of our roll-out, it was a nice 33F and raining heavily. We were cold.

We wynded out way through the 'hood and Cherokee a bit before stretching into the faint mud along the Beargrass Trail. Amid the gloom only the Mallards made an appearance. We shortly made a decision that more coffee would be much more satisfying than more wet, cold miles, so our attention was turned to the new Gralehaus, a cafe behind the popular Holy Grale beer heaven. I had an Americano, Dave a pour-over, whatever that is. The pic below shows my egg and biscuit. I believe Dave an an egg crepe. It was a fun change of pace, but I think my advanced age and mundane lifestyle did not contribute to the ambiance of what might be the hippest place in Louisville. Trying so hard. That said, it was packed and we were lucky to be just in front of 12 or so visitors, some of which were turned away due to lack of seating.

We parted ways to look for dryer options. Once home, I cleaned off the chain, rims, and pads of the Sogn, thinking all along that the cSogn, as it stands now, is about as good an all-rounder as I can imagine. I'm sorry, but I like the fit and fortitude of it better than the Atlantis. I just seem to trust it more, and care about it less, which is to say care less about nicks and scratches and such. It has been great with 35s and drops, great with Jones' and 2.2"s, and now great with 2.0"s and alt-drops again. Perched atop the fire-engine red mount, I imagined myself barreling through any and all manner of terrain and situations, loaded to bear. It's nice when a mount works, and the cSogn, for me, is working indeed. 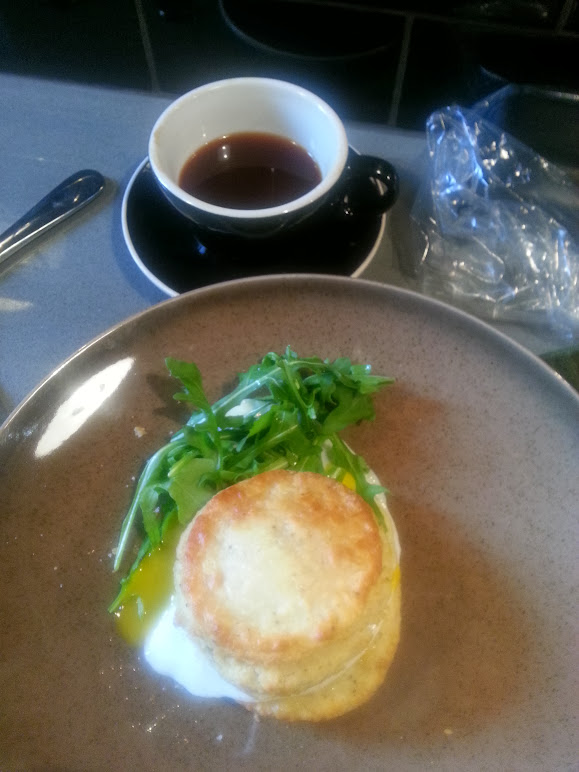