Yesterday was Easter, of course, when submarine church-goers such as myself rise up out of the abyss for a day of atonement. We were regular church attendees some years ago, but somewhere in there I claimed Sunday morning for a different type of spiritual experience, a claim most questionable given the number of scones consumed.

It was nice to go and see many friendly faces, folks who seemed to welcome us even with our commitment issues.There were a few man hugs even. It was nice. The morning was made meaningful, to me at least, with Derek's sermon, an exposition which related to the day, but in a way that I feel could be applied to any facet of life. I guess that's the point. He intimated that while many Christians revel in the tomb and in the symbolic importance of the tomb and the ensuing resurrection, the Biblical story instead explicates that the members of the story did not dawdle over the empty tomb, did not make it an instant tourist attraction, did not fetishize it. They simply went to work spreading the Word. They got to work. In Derek's eyes, the tomb is not the point. The Work is the point, God's work. Yes, symbols, bauble, and gaud  help to uplift, but the Work is the true message of the Church, at least in Derek's eyes. We do (occasionally) attend a church that is active in social justice, you know, all that feeding the poor and guiding the downtrodden stuff. It's not much of Prosperity Gospel, to say the least, so his message did make sense in the context of our church's mission, one commonly espoused now by the new Pope interestingly. Derek used two other anecdotes, one of having his first job with new suits and a new pen. Those weren't the point, the profession trappings. Also, he had purchased a new computer, again, a technological carcass meant for work, not for digital fetishizing. They were just tools, the suits and the computer. They are just tools.

Being someone who has amassed a plethora of two-wheeled objects over which I have slaved, now, for some 25 years, I couldn't help relate Derek's message of Easter, not of the symbolic tomb but of God's true work beyond that, to my stupid bikes.  It's not about the bikes; it's about the work. My friend Dale (who, mind you, does have more than 1 bike) monetarily has a bike collection far inferior to mine, but he certainly has internalized the work and has put his miles in. I have a lot of bikes, but do I have a lot of miles? Hmmm.

What I really liked about the sermon, though, was how it can be applied to life in so many ways. It's not talk; it is acts. It's the work, hopefully good work, work that helps people and helps yourself.  Thanks Derek.

Interestingly, Dave and I took a ride today, around 27 miles worth of steady pedaling. We're not in top shape, but we also didn't spend the morning on the couch eating donuts. I leave you with a couple images of Spring springing. 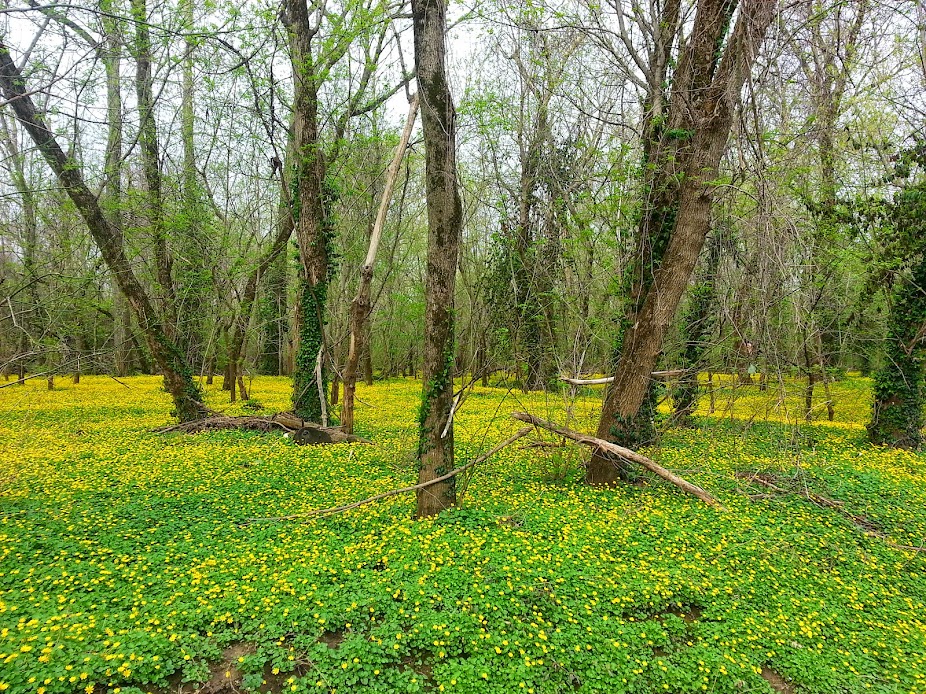 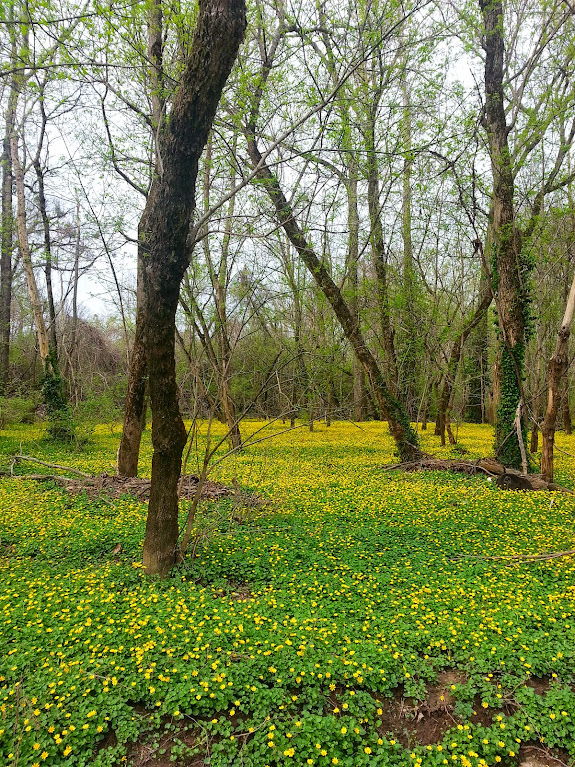 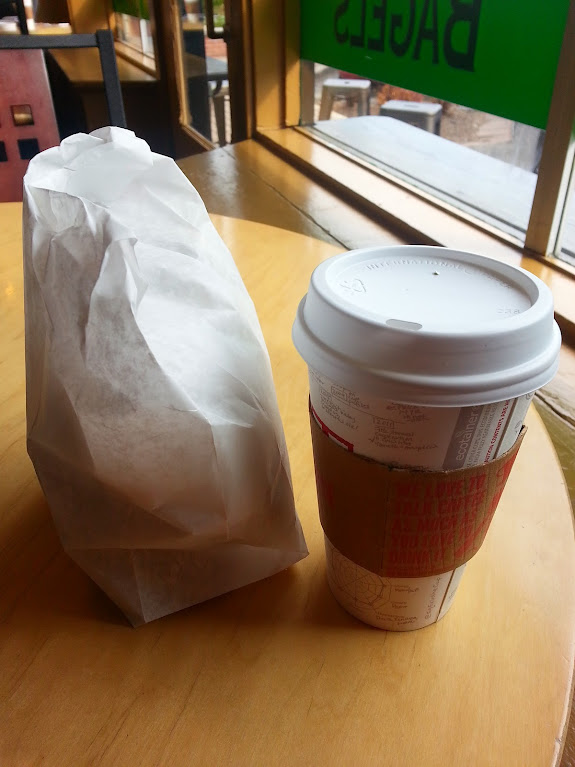 Data on mycyclinglog.com since '08. As seen, this has been my worst year of cycling so far in history. In '08 I had 22 commutes at this point. As of yesterday, I have 2. The weather hasn't helped, but the non-commitment is deeper than that. I think I need to accept my inner solo ride ethos and ride. Just Ride!
at April 11, 2014 1 comment: Links to this post

My "real ride", doing a the Longleaf Greenway and some trails in Point Washington SF. I'm gonna be honest. What should be easy wasn't. It's flat, but the sand requires power and the bogs require more power. My original plan was to do the lollipop back to the car all on trail, giving me 20+ miles of dirt. By the end of the Longleaf and the entry into Point Washington, I was pretty bushed and resigned to returning via the road, where ironically enough I had a slow leak and twice had to add air to the rear tire. It was a good day, but not a relevatory one. 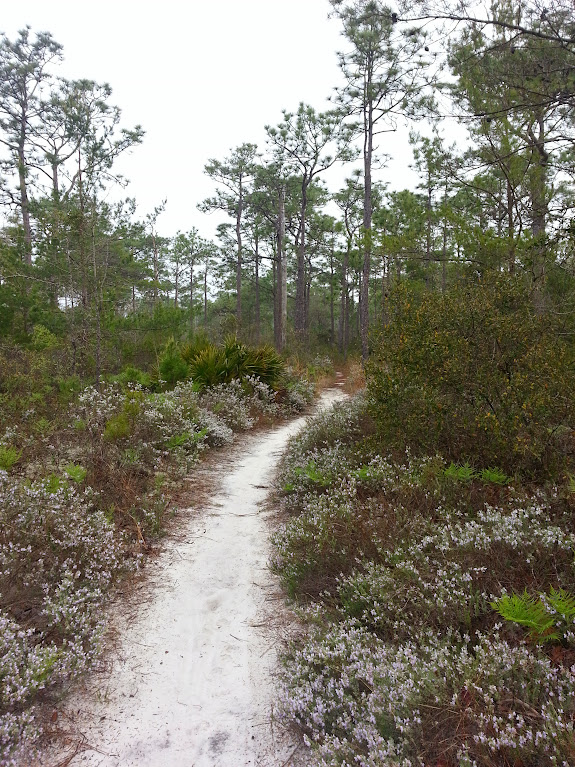 Jazzed from Sunday's taste, I went full bore and spent a couple hours exploring the west and central portions of Topsail SP, especially along the Morris Trail, which was some of the best fatbiking I've ever done. Dunes, sand, water, exploration, more bogs, birds. Delightful morning on the bike. 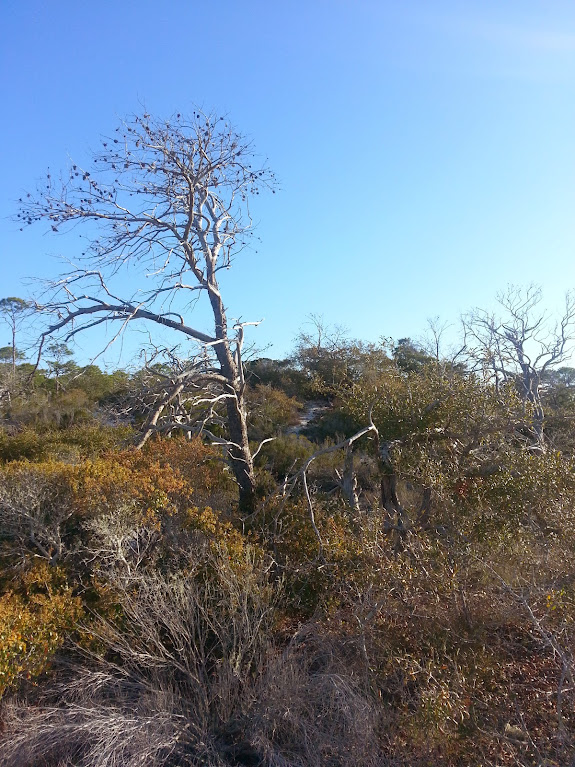 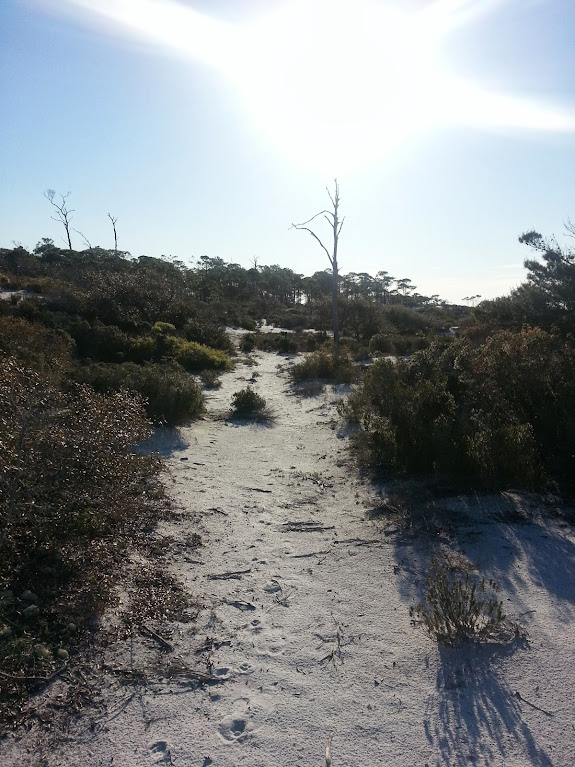 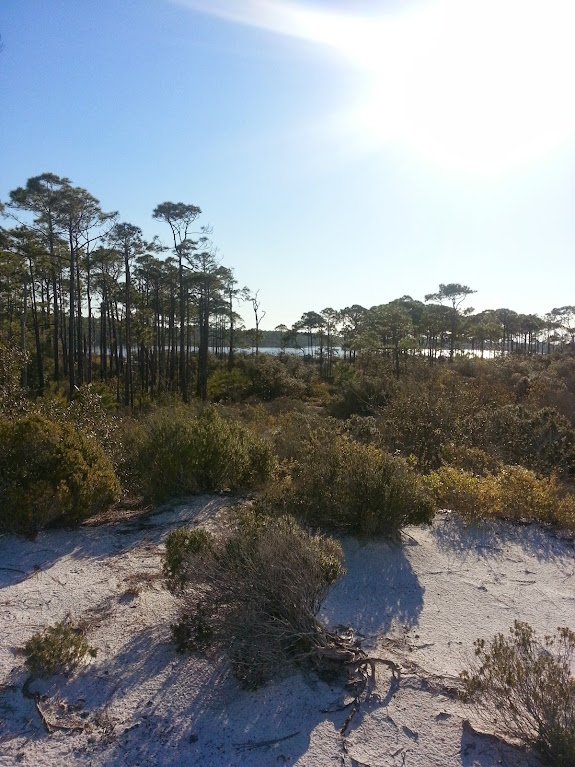 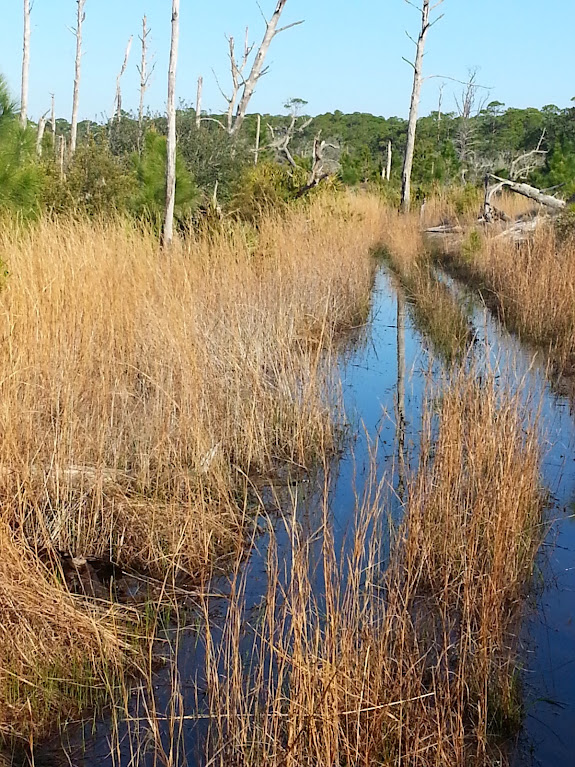 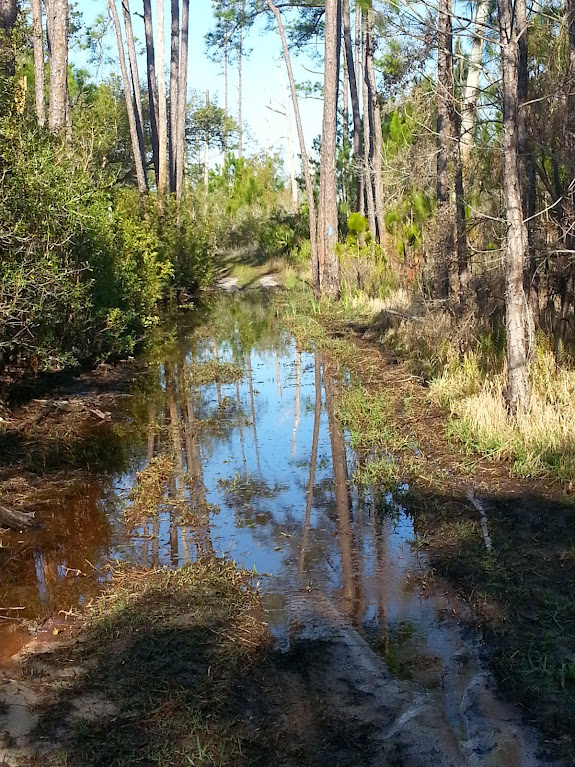 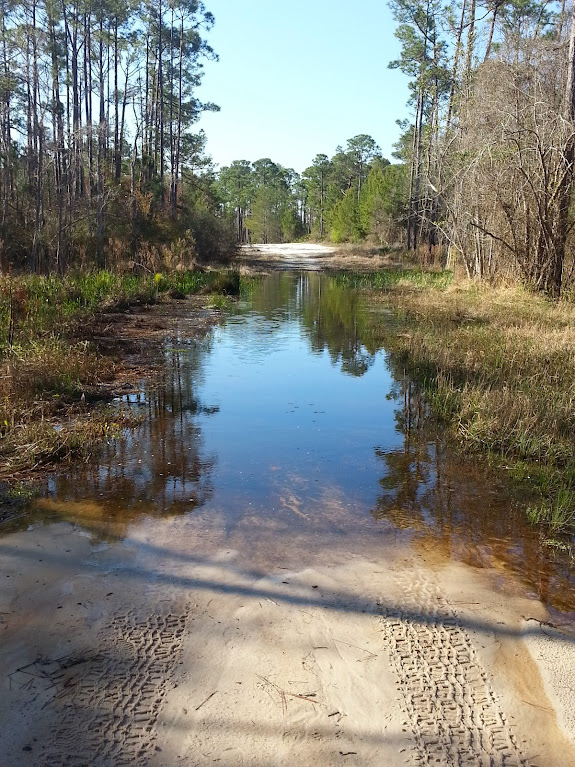 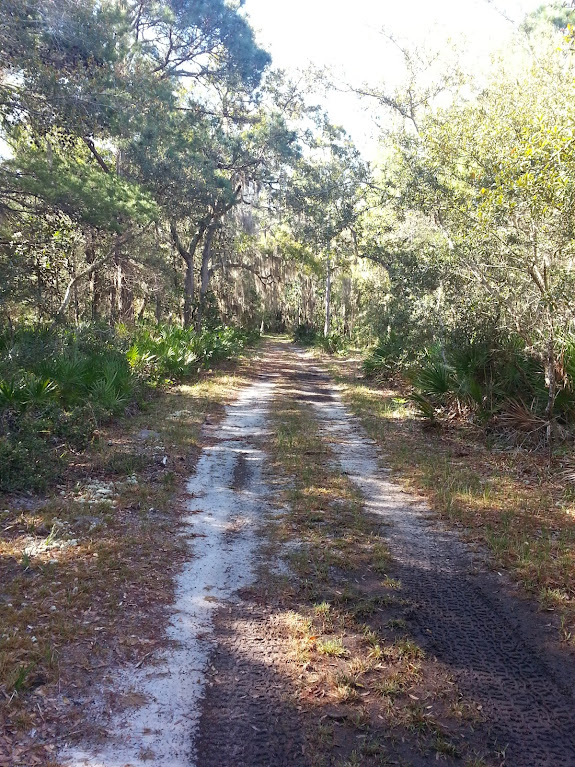 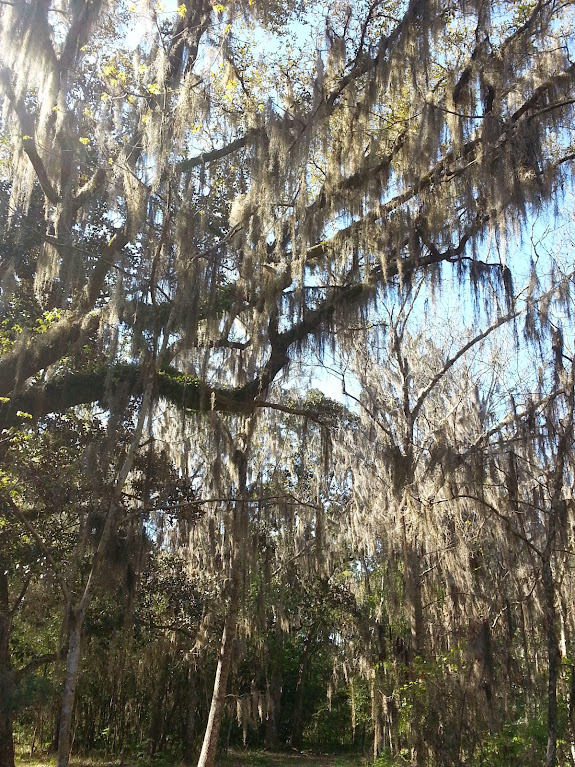 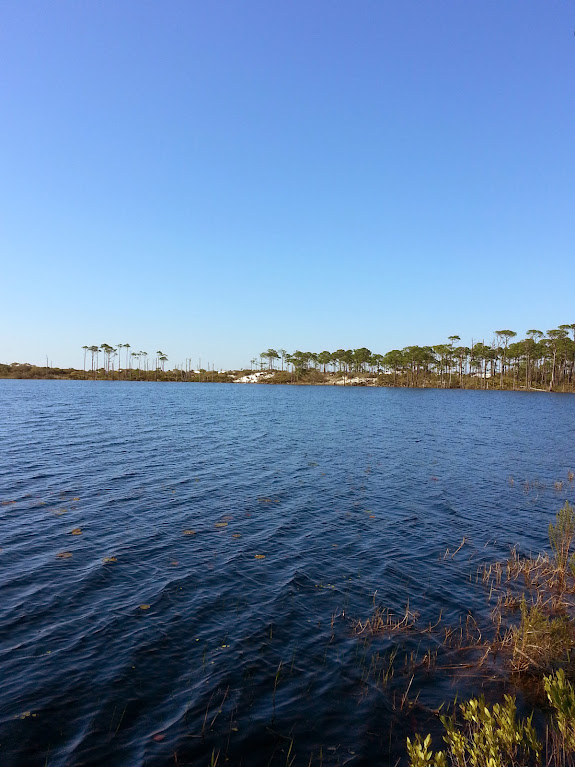 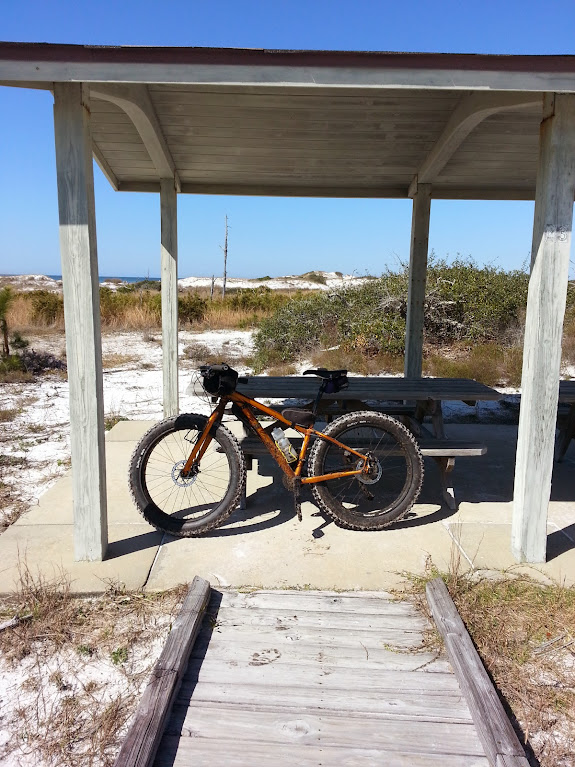 Sunday morning along Miramar and Topsail beach east of Destin, FL. Yet more fatbiking, but this time in low-60F, sand, breeze, calm. Ventured into Topsail S.P. to find muddy trails and bogs to ride through, along with dunes to explore. Highlights include beach riding for first time, mud-bogging on fatbiking, what's around the next corner, almost waist deep hoping too cold for alligators. 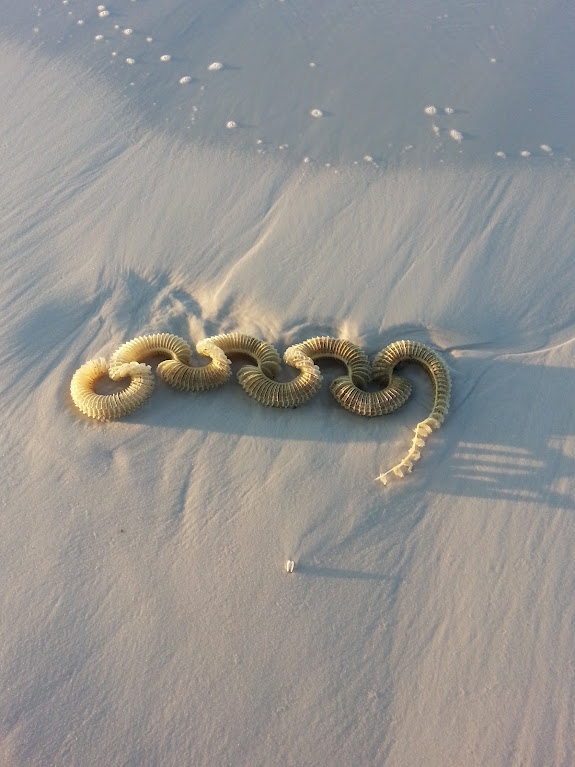 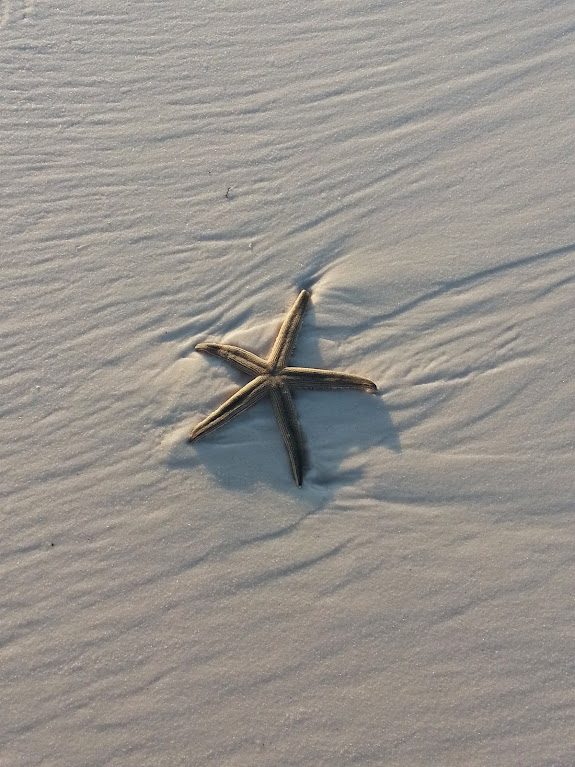 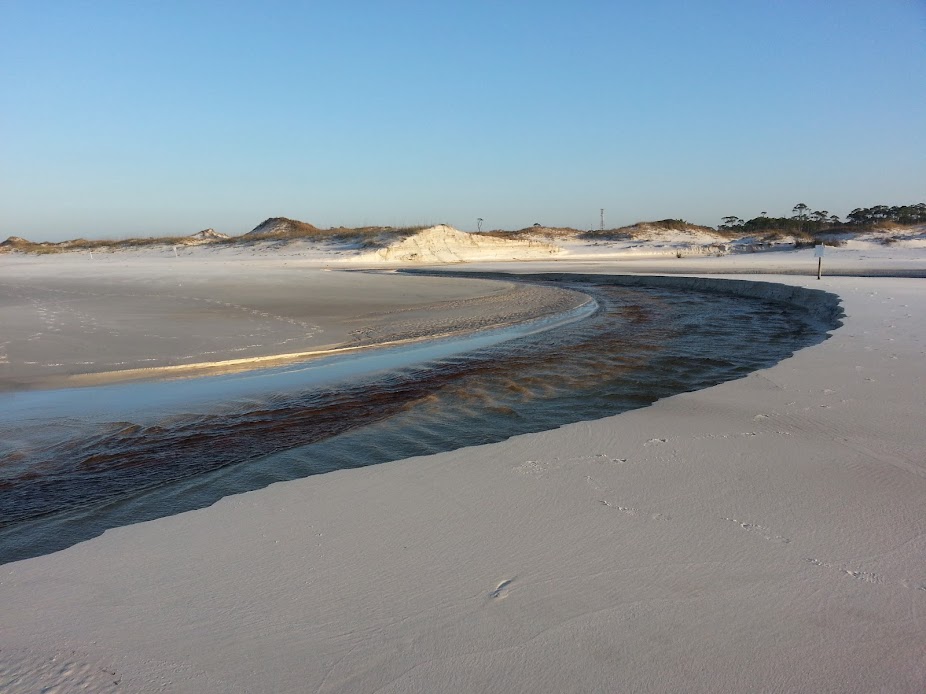 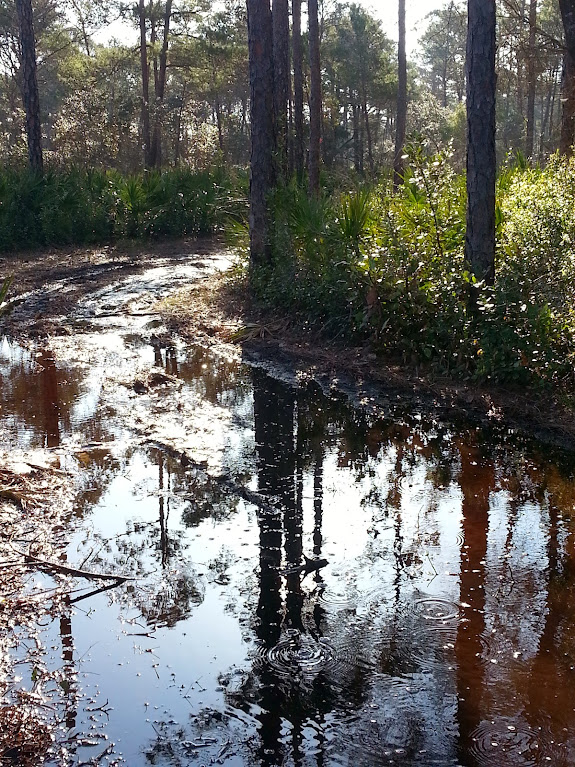 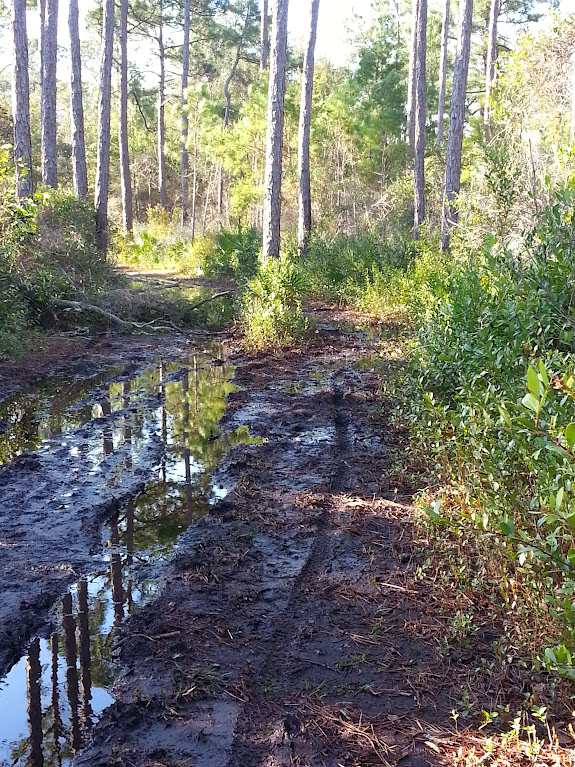 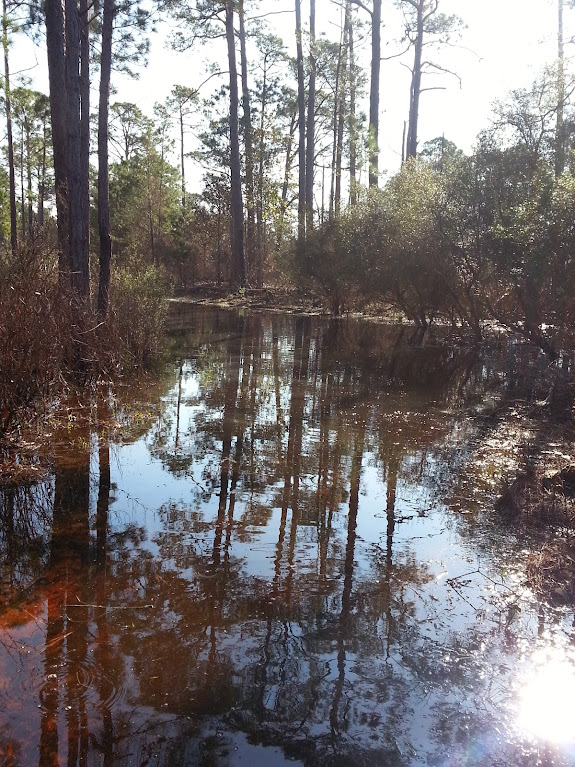 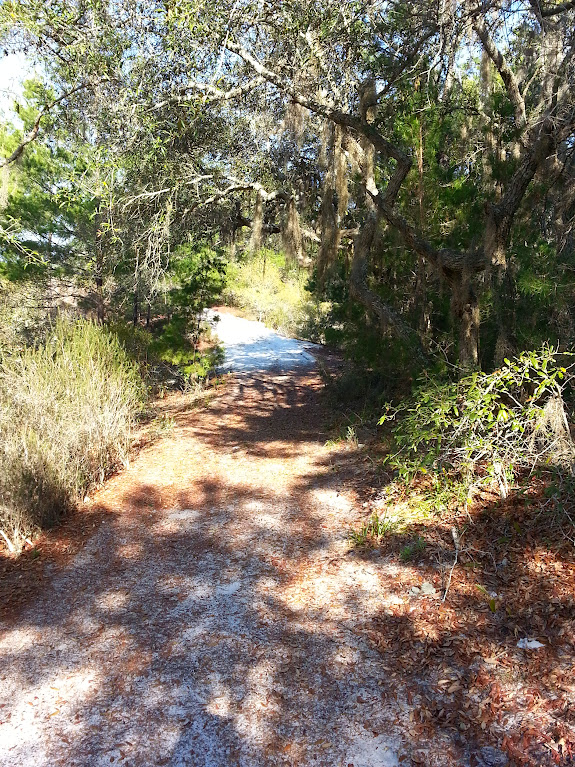 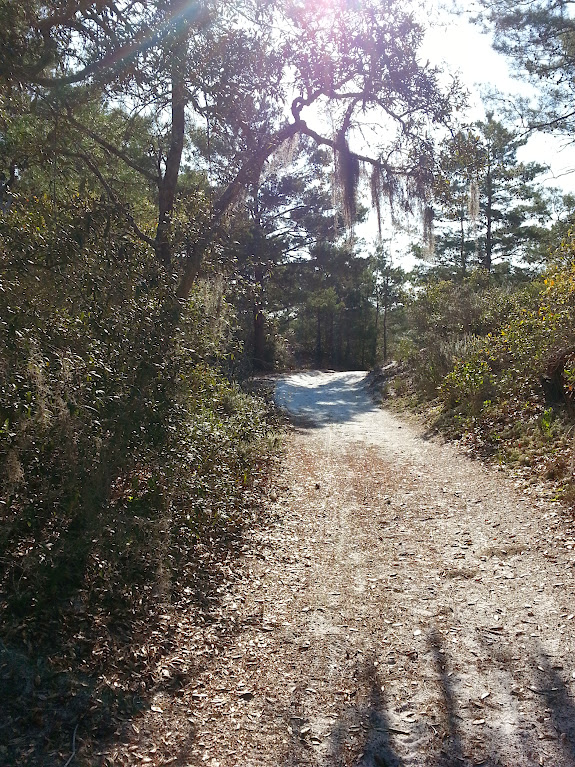