It's felt like I haven't been on my bike in months, like maybe I might have sort of ridden a bike a while ago, maybe. And that's what I like about mycyclinglog, when it works; I can crunch actual numbers. That 2011 jumps out, almost 1k worth of riding in the winter months and into tennis season. I make excuses that the boys' schedules impact my riding, but Z was a freshman that winter and would have had lots of club soccer activities in the early spring, in addition to my usual tennis. I took a peek at 2011 to find lots of RCCS activity, during which DavidC and I were organizing gravel events on the weekends and in between doing 40-milers like nothing. Now there is the combo of other activities and excuses.

Day started with some garage flooding cleaning, in addition to some post-snow rocksaltallovertheplace cleaning. IH came by. He's going to borrow the FrakenTrekSS for a couple weeks to see how he likes road bikes. He's looking for an all-rounder and his mtbike got stolen several years ago. Imagine being without a bike for several years. Shoot me. 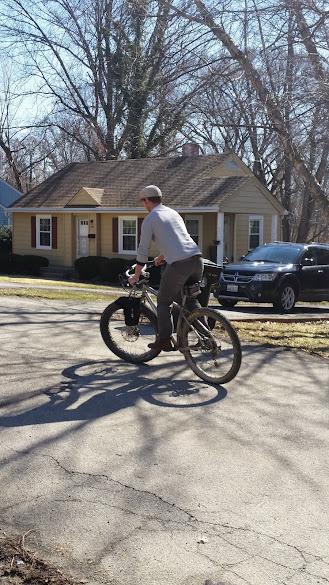 Took a spin on the Jones. 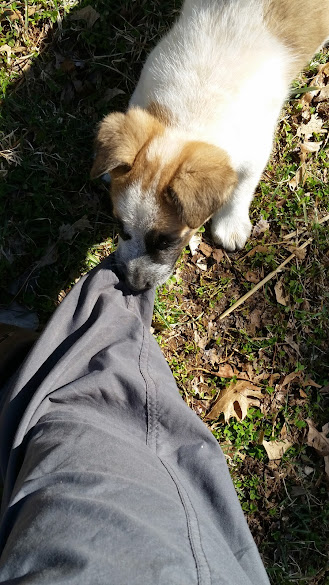 His new puppy, Neha, decided to attack my pants. Cutie.

I met Mr.Crowell for a spin in the sunshine (60F+!!) and we both did the single-speed thing. The QB was excellent all-round as we headed west where it's rather flat. Eventually we circled back around and finished the afternoon at Great Flood, ruminating on bikes, plans, bikes, and plans.  I had begun the day in a black mood- work has me pretty bent out of shape at the moment- but after an afternoon of bike organization, riding, beer, and more bike commerce, the day ended very well. 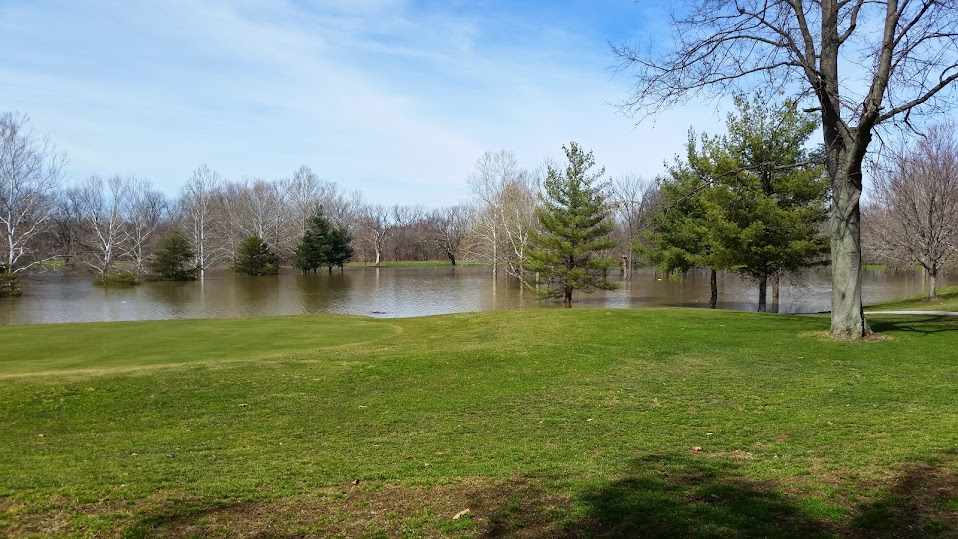 Seneca golf course. That would be a tough up-and-down. 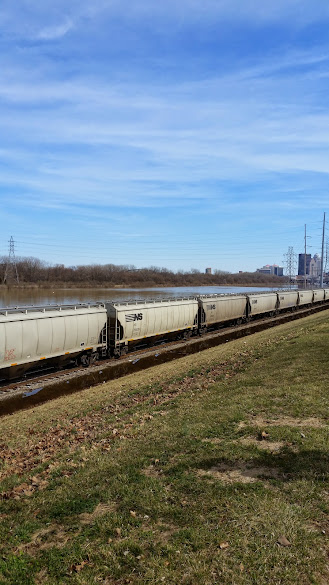 You can seen the ditch full of water to the right of the train. I suspect the river was at or above track level at some point. It's supposed to rise even higher later this week. 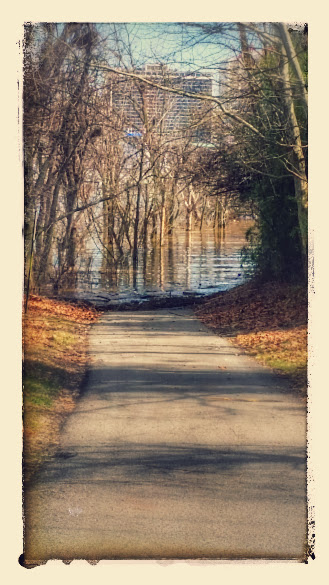 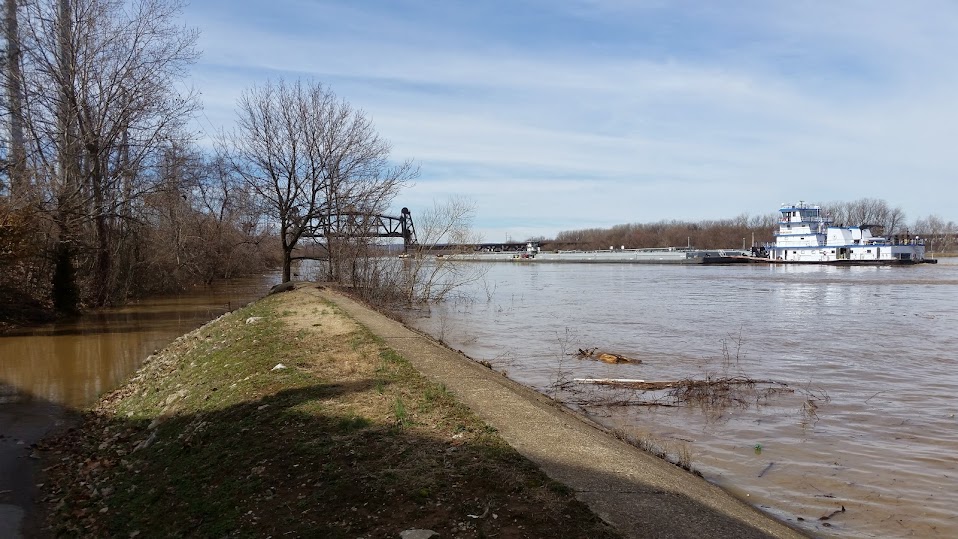 To the left is a fork of the Riverwalk. That would be a tough ride and the moment. From here you're practically even with the barge. Wacky.

The day finished with some bike biz, in this case the sale of my 1989 C'dale 'Criterium' to a young hipster couple, I think for the girlfriend. I stopped riding this bike in the mid-90's when I bought the RB-1. I find this bike to be a misery after about 2hrs and wanted something for longer distances. It went to my uncle more recently for a bit, but he found it uncomfy too. While we all live a little too much by the N+1 principle, I'm ready to pare down a bit. With this sale and the potential sale of the SSFrankenTrek, that'll be 2 out  and close to a more manageable stable. 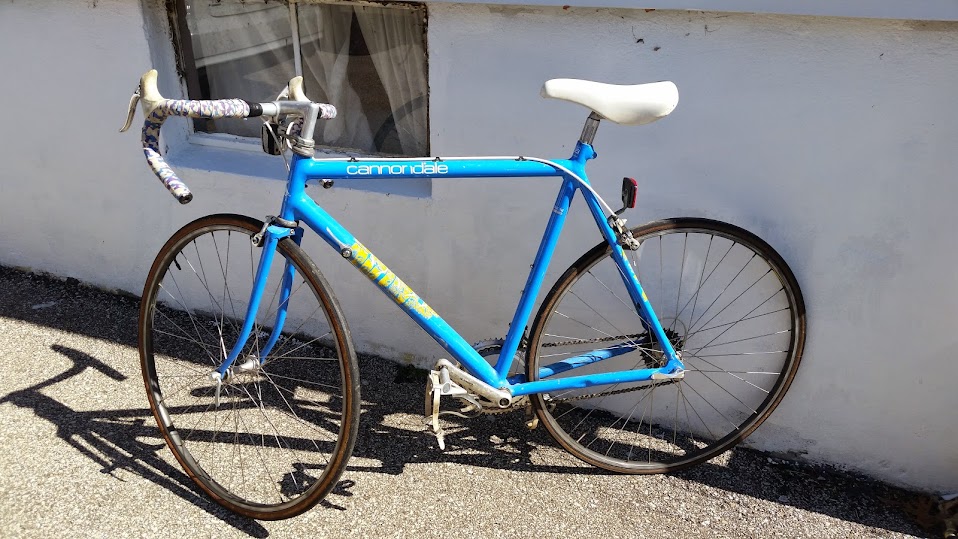 Family had some business in Danville, KY on Saturday, so after some hemming, hawing, and whining about potential rain I dragged the Blueridge along for a mid-day central KY roll. While I faced damp conditions, I never really got rained on, which was nice. More nice, though, was the chance to tour the Bluegrass region of KY. I know there are areas considered more "epic" or "raw", but C.KY has that "bucolic America" quality that is easy on the eyes. We finished the day up at Bluegrass Pizza Pub in the middle of town. They have yummy crispy pizza and a fine tap selection. The wife and I visited a summer or two ago on a mini-trip, and it's a must visit while in the area.

And now, the drop: 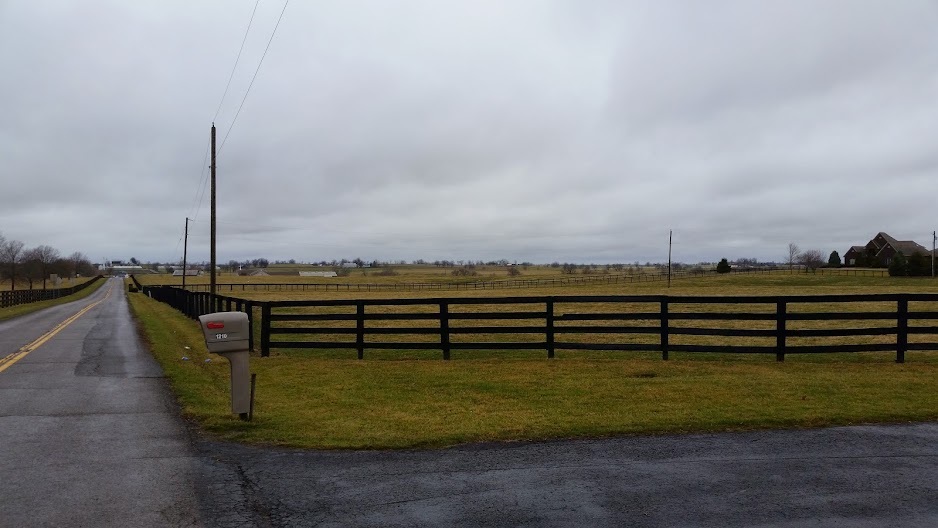 Rolling hills and "bluegrass" fences to the west of town (into a stiff headwind). I was surprised at the horsefarm-like nature of the area this far south of Lexington. 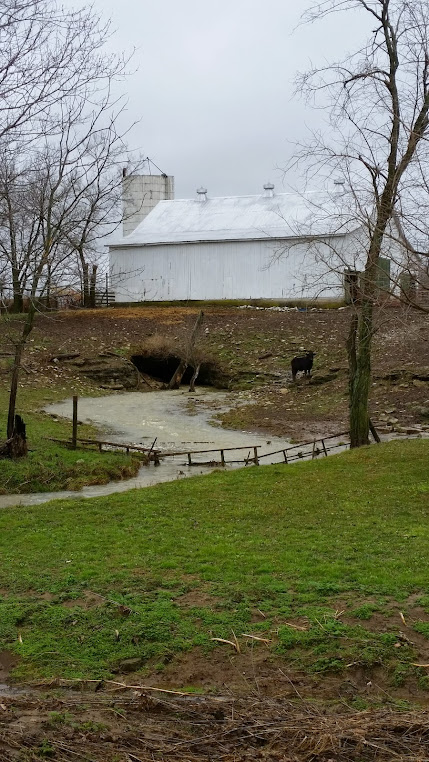 The mouth of the eath. I noticed a rivulet rushing to the right and once there I found the stream to be coming straight out the earth. It's KY. It's limestone. It's caves. 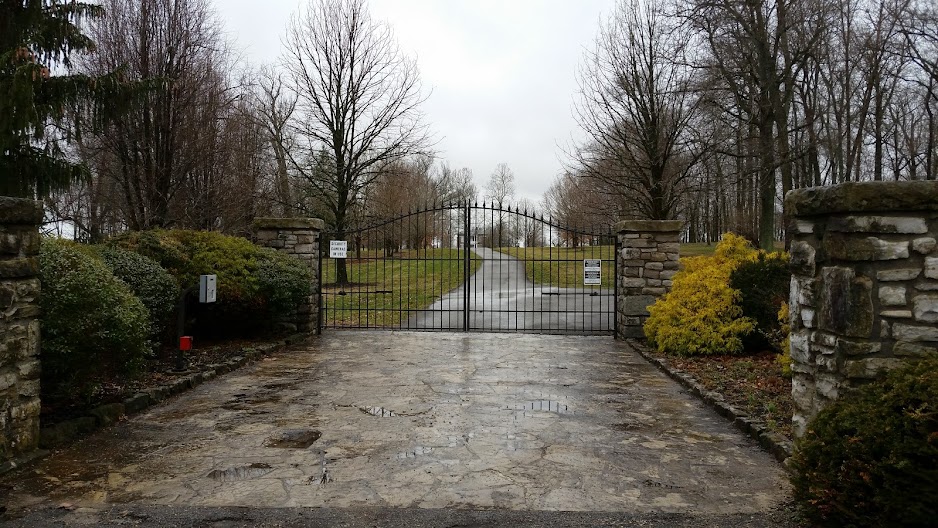 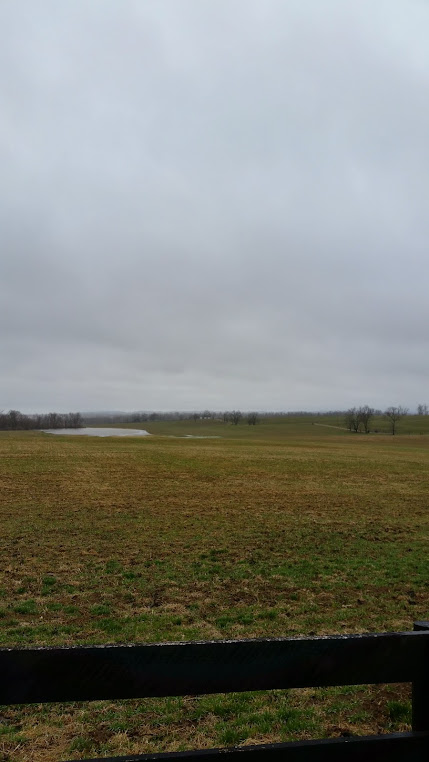 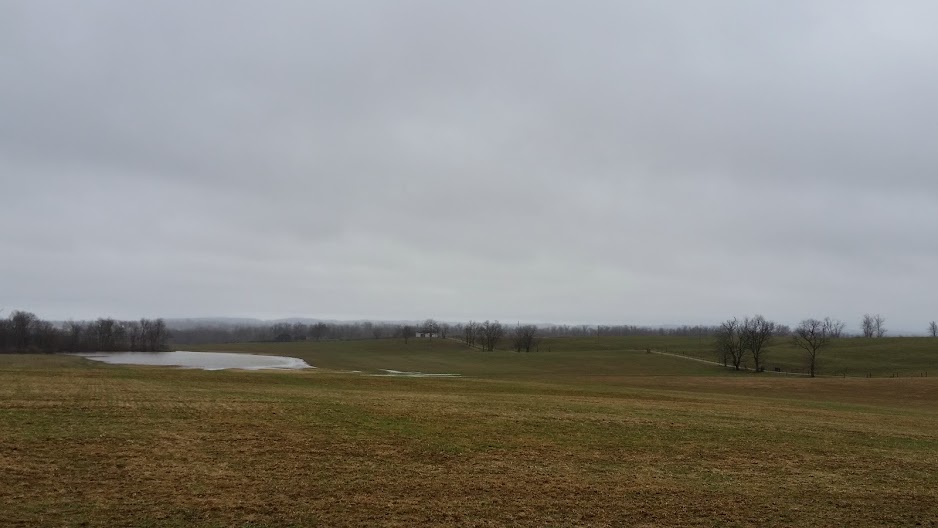 When I win the lottery I'm going to make them an offer they can't refuse. You have the rolling pastures, some trees for texture, and in the distance the foothills and knobs of the early Appalachians. The long, rolling (that word again), gravel driveway did it for me, into the distance. 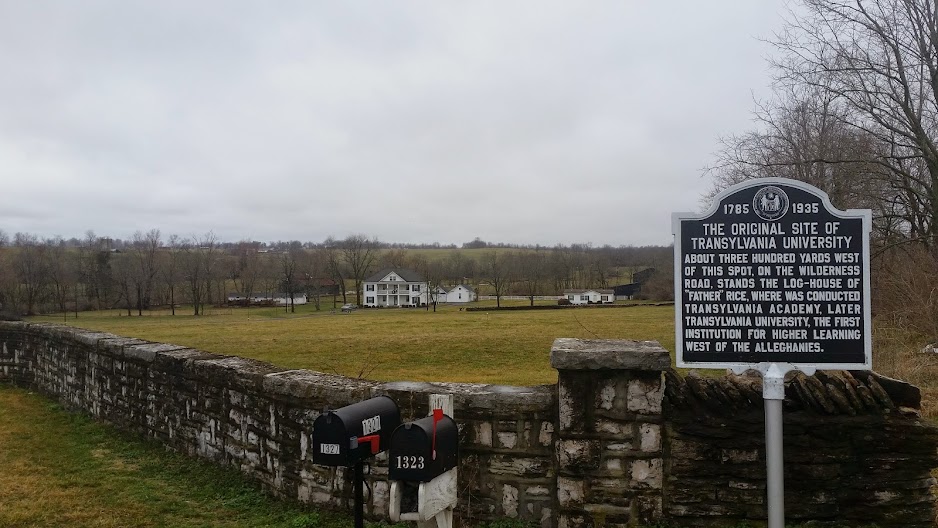 The Wife and I, both graduates, both learned a bit about our alma mater today. The sign states that Transylvania U. was founded just north of Danville in this spot and then, I guess, moved to Lexington, where it now stands. Nice spot, too. 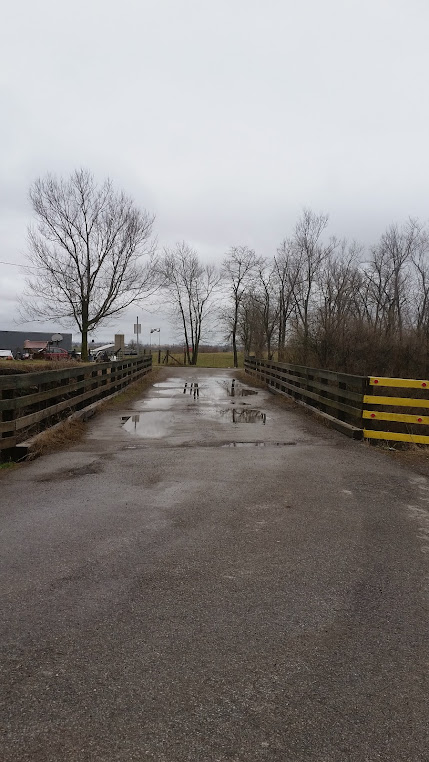 Somewhat common railroad crossing in the area. The tracks are carved down into the..rolling...hills, leaving the road to cross above at grade. 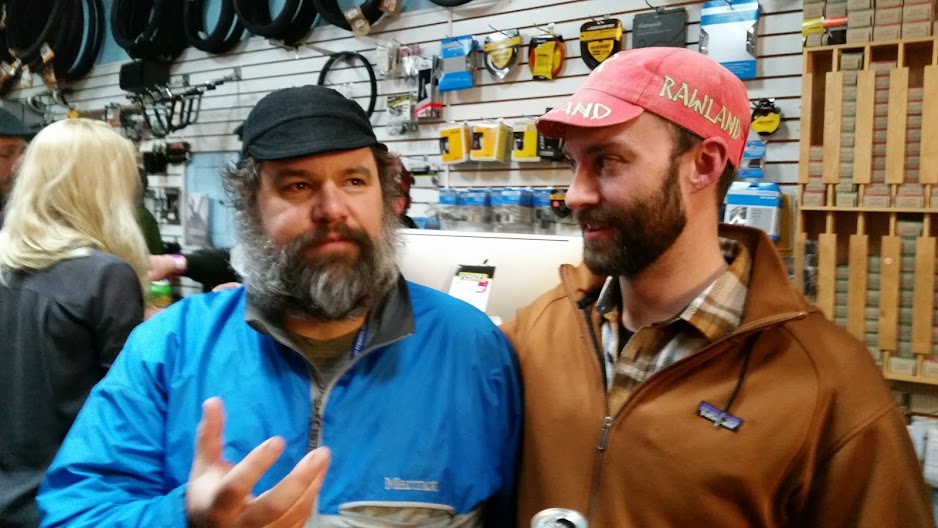 This is Nate from Michigan. As you can see, he was sporting a nicely-patina'ed Rawland bike hat, and at some point during an after-show party I found him to have a chat and a pic. In fact, upon leaving the show earlier that day I noticed a nice Rawland Stag in the bike parking area and had a little look at its balanced build. 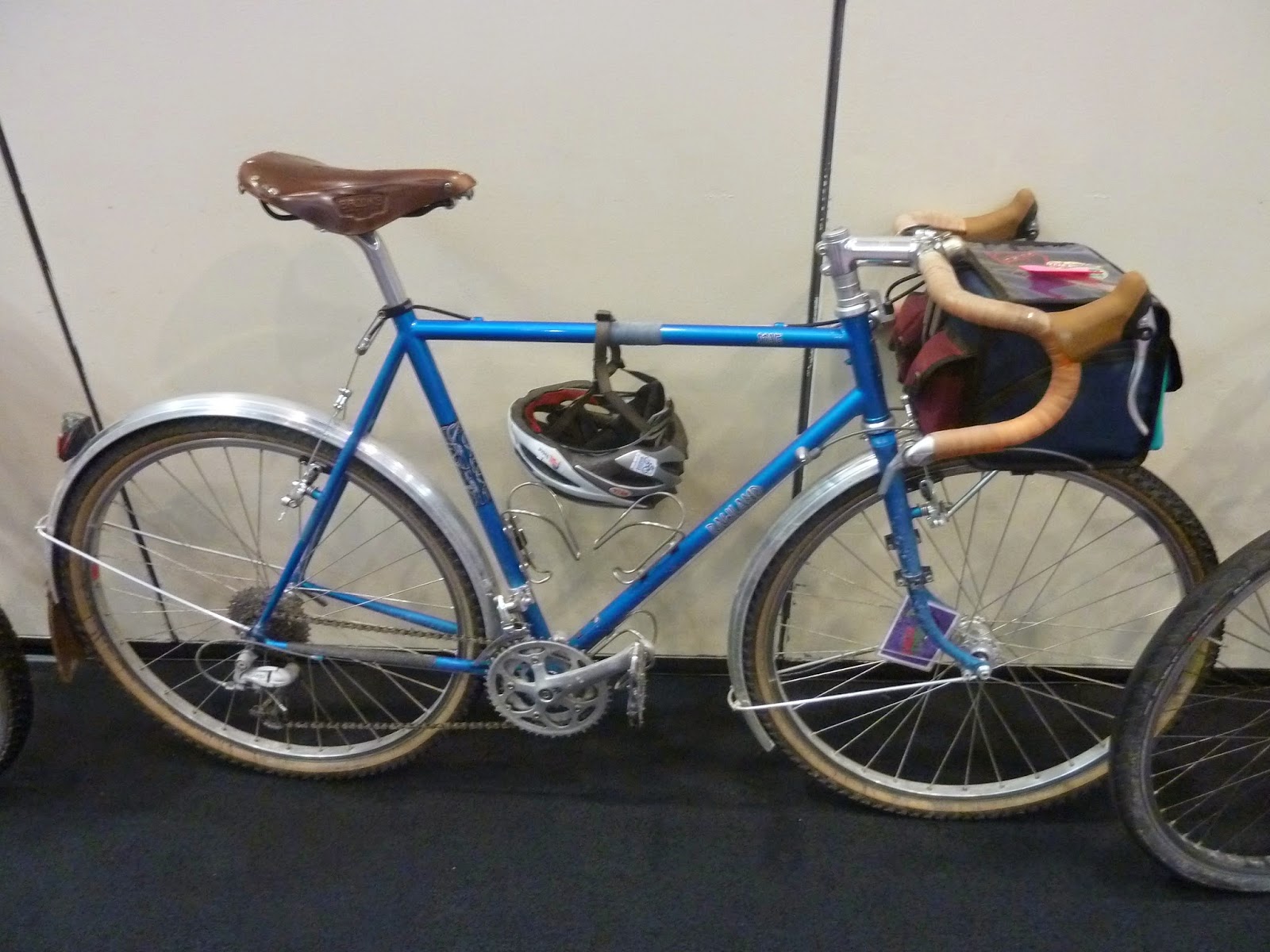 (Pic is a little fuzzy, but build is nice. We didn't talk about how he liked the Soma Cazaaderos, or are those the 650b Rock-n-Roads) 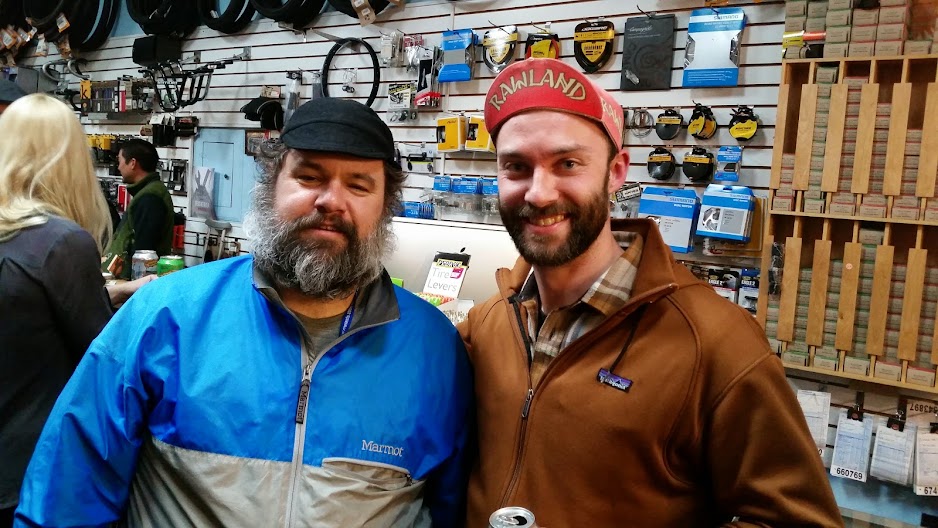 Nate is from Michigan and regaled me of the miles and miles of gravel up there. Along with some singletrack talk I had with the boys from Quiring Cycles, I feel like I'm going to have to design a MI bike visit.
at March 09, 2015 1 comment: Links to this post

For the second time in recent memory, Louisville is going to host a big cycling event, and for the second time in recent memory, Mother Nature's furious anger has rained down on the 'Ville. The 2013 Cyclocross Worlds were met with flooding and a very unhappy schedule change, which was fine for a resident local but all-out Hell for Euros flying in. This weekend we have the NAHBS coming in, lots and lots of bike porn invading the convention center. And what just happened, a March snowstorm dumping a foot on us. I drove downtown this evening and found snow-covered but doable streets helped by this afternoon's sunshine. Tomorrow's start might sort of suck, what with the temps in the morning in the single digits, but by Saturday things are supposed to warm up into the 40's and Sunday even better. I found a link on the NAHBS site for daily morning rides before the event gets going, but I doubt they'll have many takers tomorrow.

I, on the other hand, am volunteering tomorrow for the purposes of getting a free tix for Saturday or Sunday. Because I refuse to pay for parking, my cold ass is going to be fatbike commuting the 7 miles downtown in single digit temps on black ice and crust.
at March 05, 2015 1 comment: Links to this post

Happened again. What a late winter! The forecasts were coming in over the week that we were going to have an "event" and, indeed, we did. I never actually measured at home, but the official total is 11.9" of snow, with less downtown and 14+ at the local NWS office. Portions of Central KY received a foot and half of March snow. Amazing. I got out earliesh to explore a bit and see how much snow-riding/fatbiking I was going to do. On the street of near-1' totals unless I was in a car track I was going *nowhere*. Amazing even with all that float a foot of snow if not easily defeated.  I toured the neighborhood, finding a nearby 5th-class city much improved with its plowed roads instead of the big city's boodoggle. As often the case I ended up at Breadworks for some much needed supplies. I realized pretty early on that I didn't have the feet taken care of enough, and that was my easy excuse to do nothing more than a short coffee ride instead of something more adventurous. That's how it goes sometimes.

The home street in its snowy, mushy bliss.

Conditions on the day were all over the place, as I've found snowbiking to be. It's hard to describe every possible surface and every possible (medium to slow) speed. I've learned to stay the hell away from the tire-sucking mush. Peanutbuttery gross.  After my Herculean outing  I came home and shoveled and cleaned off cars, doing a better home-owning job that usual. And this is after I cleaned out the gutters on Wednesday in anticipation of the needed flow. Hope we have no more leaks like a week ago.

The weather has been crappy and I've ridden very little. Both yesterday and this evening I managed to get out for 1hr workouts that were less workouts than just good ol' pedalling. Eventually the cold will break and we can all feel like cyclists again. This morning I did a little birding for the first time in a while, all in a nice 33F sleet and rain. Geez.
10th Street:
Bufflehead
Canada Goose
DB Cormorant
Canvasback
Ringed billed Gull

Ashland Park:
Scaups
GB Heron
Mallard
I was cold and wind-blown here, so I think there were some more but I didn't last long.