It's been a slow March on 2-wheels. I was shocked when I entered my commute miles for today that I hadn't been on the bike for 2 weeks. Suffice to say, though, that today is a grand day! About 1 hour ago I FedExed my "box" to the NBPTS headquarters. The grand National Boards portfolio is finished and sent, two days early even! I've been nearly giddy all day with the thought of getting this burden off my shoulders. I think I did a quality product and hope to score well enough to "pass" come November. I do have the test left, or in modern parlance, the "assessment", during which I have to prove that I know Spanish, which I do. I'm confident. I'm leaving nothing for chance though; if I fail (i.e., don't pass the first time), I won't be crestfallen. I know of many others who befell the same fate.
I did ride today, some 14 total miles on a slow-n-easy commute on the Ute. As much as I planned to ride more during tennis season, it's been the evening soccer that has demanded the attention. Tomorrow, for example, I have practice until 4.30. No biggie. But 'Z' has a game out in the SW part of the county at 5.30, so I'll have to make big decisions. I also have to go outside and change a flat tire on the wife's car. Arrggg! It's always something.
But at least 1 big monkey has been sent to the house!
at March 29, 2010 1 comment: Email ThisBlogThis!Share to TwitterShare to FacebookShare to Pinterest
Labels: Pix

Friday and sunny weather sands evening family activities mean a "tennis" commute, a central premise behind the Ute purchase. It was uneventful in every good way, and a great way to steal 14m of bike riding instead of burning dead dinosaurs. 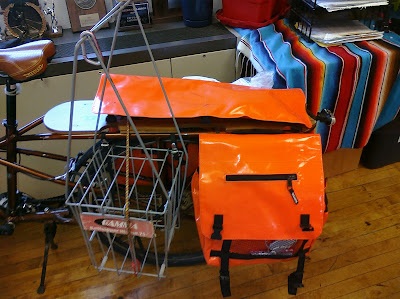 This is a left view of the Ute. The rear smaller bag is the one I use for school-related items such as my school clothes, papers and lunch if need be. You may be able to see my Ipod nano in the webbed pocket there on the outside. The zipped pocket might be a better idea, but whatev. To the left of the pannier is my smaller metal tennis hopper, this time without balls. It's lashed on with toe straps up top and the extra bungee and another toe strap on the bottom to keep the bottom quiet. So far I'm unimpressed with my lashing on technique. Drew at OYLC suggested the manly toe straps, but either I'm affixing them incorrectly or Drew is full of crap b/c the weights makes them slowly loosen, hence the use of the extra bungee. It held fast, at least for this ride. The challenge is to haul a full hopper and haul it safely and securly 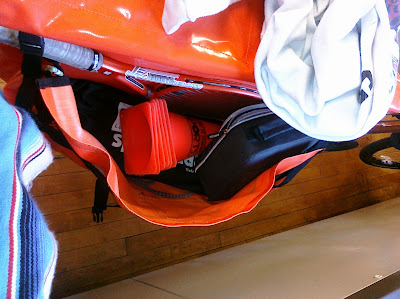 The right side has the Big Bag (like the Big Salad!). As you can see, this holds a racket, cones, footwork ladder (in big black bag), a student's lost lunchbox (idiots!) and before had that white sweatshirt too. And there was *plenty* of room left.
Likes:
Dislikes:
In my short time, I'll give the Ute an A-, the knock against it being the issue of the lashing options along the top deck. It's a cargo bike and it needs to be as flexible as possible, and it's not. On the other hand, it rides better than expected and is still very handy in ways normal bikes are not. There will be many more rides on the Ute, so maybe an end-of-Spring review will be in order.
at March 06, 2010 1 comment:

Nothing much except a nice commute today on the Ute. It was a toughie as I left at 6.15a.m. and got home at 7.15a.m. That makes for a long day, but doesn't it for everybody. Tomorrow I have a release day for NBPTS and I'm gonna take a pic of the Ute doing a little cargo load. Below we have a few more things to note: 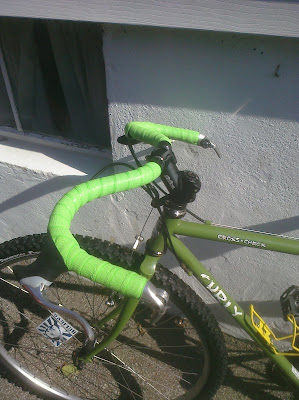 Crosscheck in new monstercross mode. I like the ugly green bar tape; it matches the green of the tubing sticker on the seatpost tube. Notice, too, the reentry of the moustache bars and the new Firecross 45c. Those are ridiculous, fat tires. 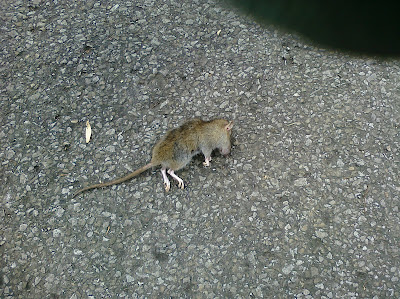 Aside my glove, this is an attractive view of a very dead rat I saw in my Sunday ride in Cherokee Park. Yummy! 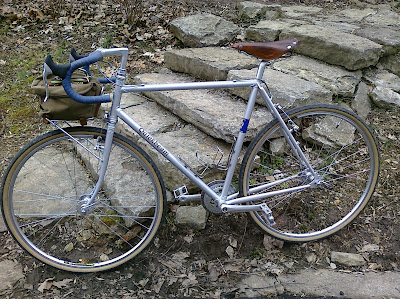