Washed frame to sell (cable lost, so no pics yet). Removed fenders to sell. Gardening. Nap. Quick one before mom's. Good.
at May 28, 2012 No comments: Links to this post

It was rather unexpected, but I did a metric century, right at 62m, this morning, all before 12p.m. I had planned to ride early with Patrick, a tempo ride early before his parenting duties kicked in. We did a good tempo out River Rd. and I was feeling my mtbike effort from the previous day; in fact I was pretty poor. Patrick distanced me on the Wolf Pen climb, but I got him back on the short, steep Barbour Ln. climb.

Once I dropped PJ off I made my way back into town for coffee and to briefly meet up with the gang, which was going back out for an undetermined jaunt at 9.00. Having no other particular plan, I follow them through the Highlands and down towards the Riverwalk. Ian was on the Dummy, so I knew I could at least draft him. Dave was on the 'bent and Timothy on his new Soma. We ended up having a very pleasant ride out the Riverwalk (with some BD disc issues en route) and then to a water stop in Shawnee Park. From there we used Algonquin to complete the westward loop before finishing on B'town. We were going to avail ourselves of food and libations but it wasn't 1.00 yet, the magic hour on Sunday. Instead I went home, first with a brief stop at Kroger, and as I approached, I noticed that I was going to be within tenths of a metric, so around the block I went, finishing with 62 miles en punto. I felt crushed after my mtbike ride yesterday- one where I finished early defeated- and then started the morning pretty rickety. By Shawnee I was pretty warmed up and feeling better and I finished adequately.

Of course, I almost came to blows with the good wife b/c she was between me and my burrito, but fortunately I ate it, stemming off the food-deprived mania. Good mileage start to the Summer Cycling Season.

Plenty of other people have done this, but I'm going to do so myself for my own purposes. Following is a bike camping list a couple upcoming trips, so a  3-night mini-tour in early June, and later perhaps an overnight in southern KY. So:

I think that takes care of basic shelter. Now prep/food:


Bike stuff. Hey! We all know what bike stuff to take, in  general. Extras for a 3-day include extra tubes, ?an extra tire?, semi-full tool kit, extra flashies, a couple extra grocery bags for protecting saddle.

What else? Time to steadily get things together.

Not much has happened. More things are about to happen. Tennis is over after a very good season, but now we're going to try and transition into summer cycling/adventure season. I have some plans cooking but don't really want to divulge until closer to time. I know, Lame, but if I don't have pics, reviews or hard plans, screw it.  The bloggage here is certainly not up to 'Vik Standards' (he's so fly you can't even grab the specific post, 5/8/12), but we all can't be Vik. Of course, he can't be me either. I don't see him dragging offpsring to soccer practice.

I had opportunity for my first commute in ages (best as I can tell, the first work commute since early March)- 15.4 miles on the Ute, clement morning, afternoon filled with bizarre sunny skies intermingled with spitting rain and localized deluges in the park, but not on me, just right before me. Weird. Nice to be out, though, and we're out of school tomorrow for election day. Score!
at May 21, 2012 No comments: Links to this post

Email ThisBlogThis!Share to TwitterShare to FacebookShare to Pinterest
Labels: Commute

It wasn't the most exceptional,the most adventurous, the most epic, the most anything. What it was was the opportunity to spin some nice miles sans traffic on the start of a busy Sunday. We were on 3 completely different rigs which made things interesting. Otherwise, the temps were moderate, the fog sort of refreshing, and no one had any agenda to speak of other than ride a bit. Success. 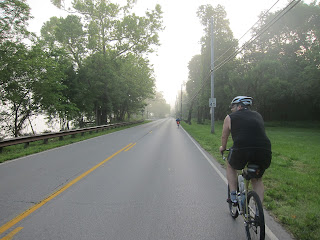 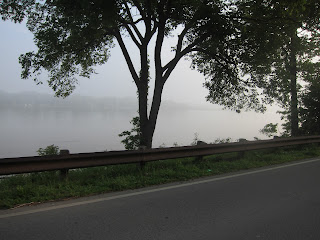 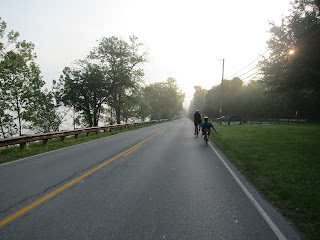 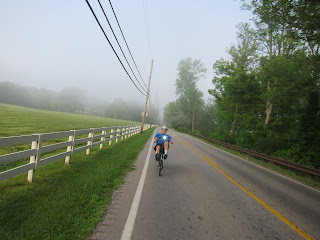 But some sunshine on the horizon. Coffee Ride date in the morning. Another ride date Sunday morning. A spin can do the body good.
at May 03, 2012 1 comment: Links to this post