The good wife is a big fan of Over the Rhine, a singer-songwriter/folk/country/gospel kinda band based in southern Ohio. Through some kind of process, she used some of her Christmas money and bought tickets to a concert held last night on the personal farm of the duo that is OTR. The Civil War era farmhouse lies 40 miles outside of Cincy, and another 45 miles north of my mother-in-law, so we combined a Saturday visit/Sat show/Sunday bike ride/Sunday visit into a mini-holiday trip.

Their brand of music is nice and I respect it, but I wouldn't call myself a fan. What I am a fan of, though, is being outside in the clean, country air. After 6 or so songs, I got up and milled around their (what looks like) 15-acre spread and eventually gravitated to the far corner for some bird-watching, where I spied me a bob-WHITE, some indigo buntings, what looked like a thrasher or wren and the usual host of farm birds. With the music, 65F temps and no humidity, it was about as nice as it could be, although stars would have been nice too. The wife thoroughly enjoyed herself, as did I, in such a peaceful setting. 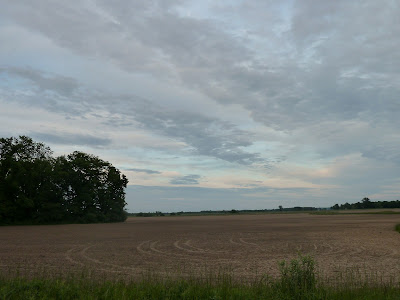 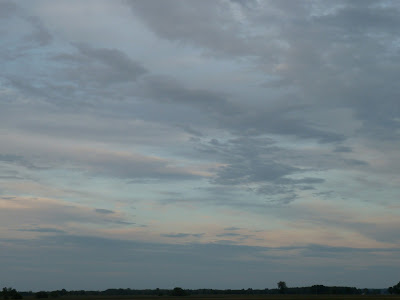 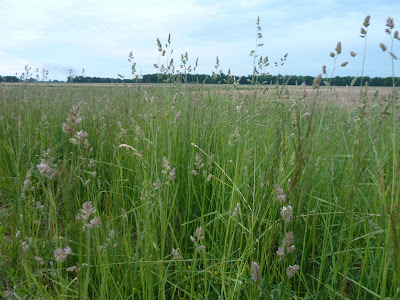 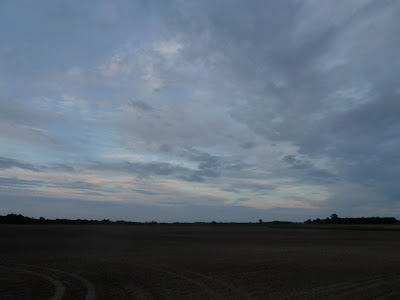 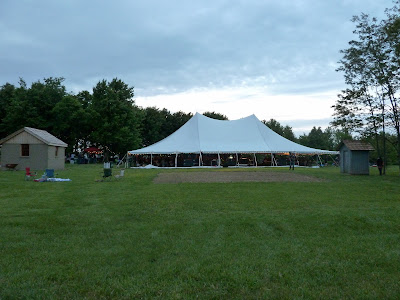 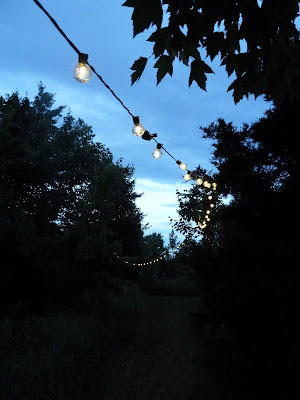 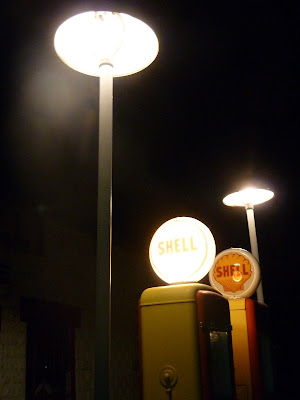 Post-tennis is going well. I'm a bit light, free. Today I did the commute as I did M and T (my late-night jra T ended up hampering my Wednesday commute. Excuses) and on the way home I dropped in on the OYLC crew to get some Shop Time, something which I haven't had in a while. I jawed a bit with Drew and Jimmy and met John and Ben who were interloping from MI. After some Cherokee/Waverly talk they invited me for a mug at Cumberland, which I felt would be rude to turn down, so I rolled the Sogn down to the joint and helmet locked up to a trash can. They were amenable to sitting outside, and at 4.30 there wasn't much demand, so we had a few pale ales and enjoyed the 65F, overcast, breezy, blissful weather.

Ben and I talked a good bit about frames, bikes, building (he's a burgeoning builder himself. I'm sorry I forgot his framesake's name), trails and all kinds of other shit. John was a good convo too, but he had his eye on a long-lost lady friend he hadn't seen in a while (he lives in MI but lived for a while in the 'Ville). I bade them adieu and returned home only to make a brief pit stop before embarking again- this time on the Blueridge- with 2 bottles of wine in the rando bag along with some sandals. A long-time Sprench teacher is retiring and a reasonably young colleague threw the party. The ride over was a bit humid but very nice, and after an evening of small talk, a couple glasses of wine and cake (there was other food too), I had the good fortune to return home via the BR in 60F breezy bliss.

Certainly why we make the effort to ride two wheels.  All others, please be jealous.
at May 23, 2013 No comments: Links to this post

Being that it's the end of the tennis season, I will come into a bit of cash/debit card, probably to the tune of around $200-300. Seeings how I busted the budget on SeaFoam this Spring, this cash will be my summer fun adventure $$. I need to use it wisely and would love any insight, reviews, feedback, opinions or just good ol' grousing.

Here are some ideas with justifications:

Fancy that. Transporting myself to my place of employment via a self-propelled two-wheeled vehicle.

I took the long way home. 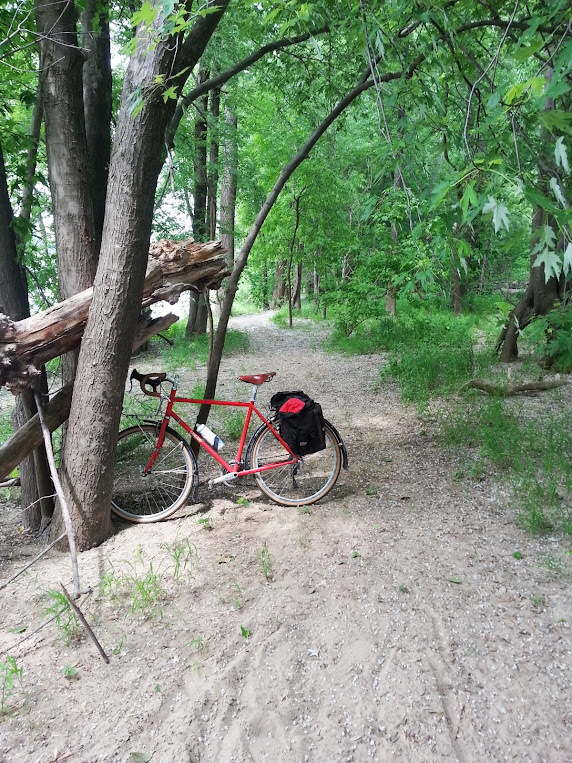 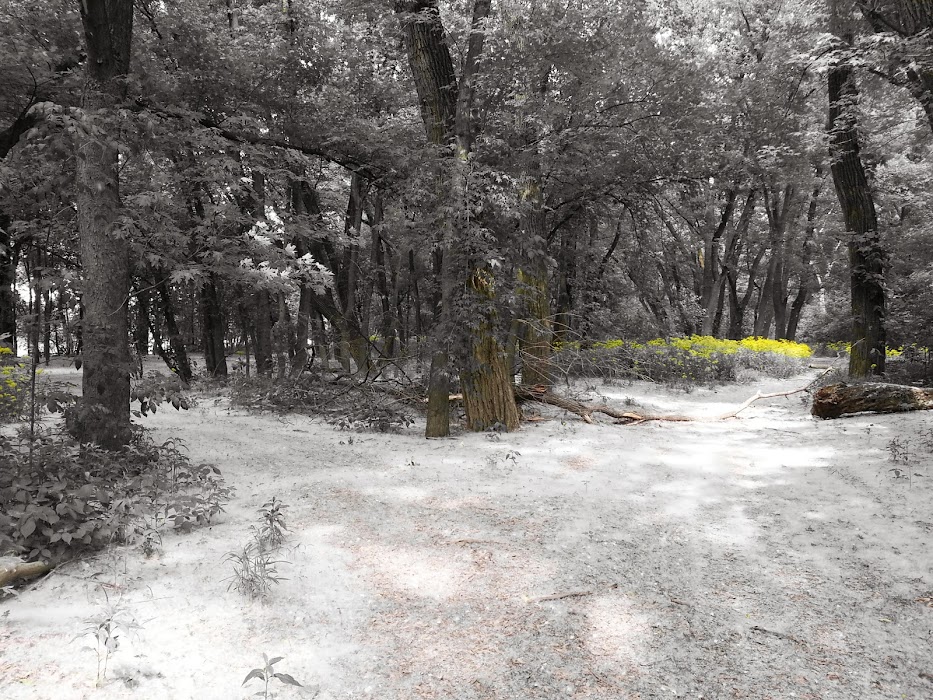 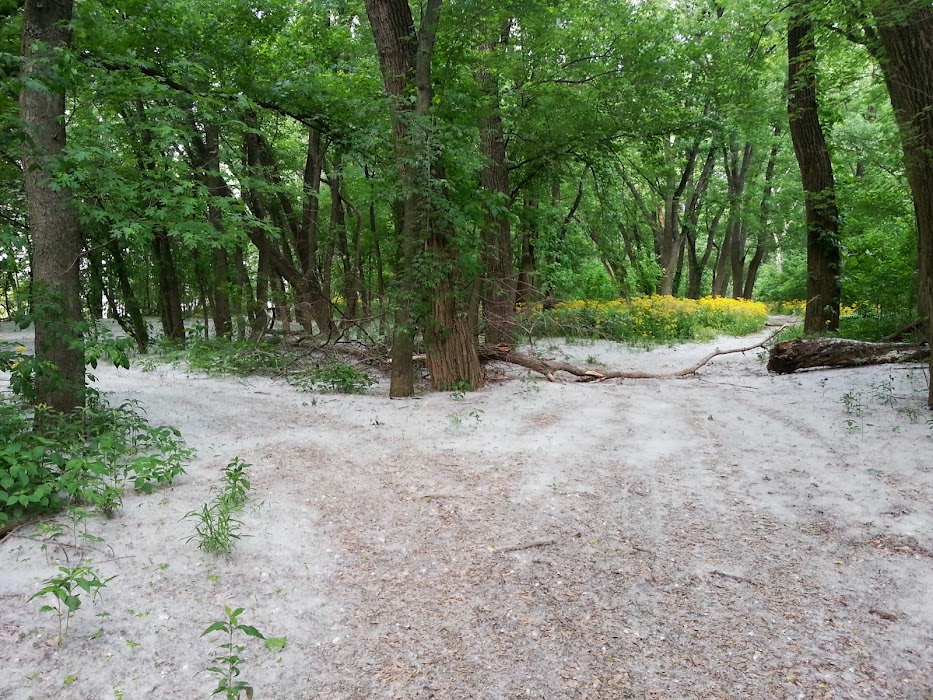 #SCS #SummerCyclingSeason has begun! Tennis, save a couple parties and meetings, is put away in the attic for next year. The boys' soccer is in the final death-throes for the Spring season, so now it's time to be selfish, human and newly fit. Last night I took the wife out to dinner and a movie (strong thumbs up for Silver Linings Playbook). This morning I needed to pick 'L' up from an event at 12, so I planned a ride leaving from PJ's, who lives quite close to the required destination. I'm sure we were cute in our Rivendells, he on his A. Homer Hilsen and I on the (tennis-paid-for) Atlantis. My fitness is truly abysmal, but I have the time now to do something about that. I consider this morning to be the first ride of many to get my fitness back up for some summer adventures, whether they be tours, gravel rides, hundys or S24Os. Anything to keep the body moving.

This route is a standard one for many Louisvillians and for PJ, who has easier access to the OldhamCo area than I do, or Dave for that matter. We both knew up front that my fitness is garbage, so we just did the pace we could, he extended on the climbs and I made forward progress. Funnily, I uploaded to Strava and found that my pace on the stair-step Covered Bridge climb was only a few minutes slower, but the steeper Sleepy Hollow showed a markedly slower pace. Who the eff cares!?!?

We stopped in Stepford, er, Nortons Commons for a coffee and then finished up with the jagged profile of Wolf Pen. You know, the legs weren't there and the cardio was even more pathetic, but it was as good a ride as I recently remember. Great, simply Great to be out there.

I've not had much fun coaching tennis this season. The modern kid isn't as motivated to "do it for the team", so instead of managing known planetary orbits, you're chasing meteors pinging to and fro. They're still in the solar system, but you never quite know their motivations other than that their motivation is certainly individual.

My metaphor is questionable.

This week has been labeled "Hell Week", at least where my life comes in. I'm not reflecting on what I am doing; I am simply doing due to the lack of space-time to think, reflect, or really even opine.  It's Wednesday, so I consider myself through three days of the 8-day Hell Week. I find it lamentable to live a life of important or fun activities and not experience them, to wish them away like days of a prison sentence. Yet, that's what I'm doing because the pay-off, which will mostly be my health, will soon approach.

Sunday- 200 miles of driving to Richmond, KY for Z's soccer on Mother's Day. He scored! Honestly, it was the most pathetic club soccer game ever. He won 6-0 but could have been 12-0 had they not called off the dogs in the second half. And it was played on a soupy goat pasture.

Monday- Work then drive 160 total miles to Lexington, KY for the state tennis tournament seeding meeting. I got home around 9.00 or so. We got some good seeds, which can be unfortunate because that means you have to stay at the tourney and "coach" kids that are as disinteretested as their coach.

Tuesday- Work then teacher interviews then drive almost 100 total miles to a rain make-up soccer game in E'town, KY. We got home at 10.00. To be fair, I did a little bird watching during the pre-game and saw bluejay, robin, female cardinal, red wing blackbird, crow, two rabbits, identified a Common Yellowthroat, a Hairy Woodpecker, a Killdeer and couldn't ID a swift of some sort,  little very grey sparrow thing nor a solid black sparrow-sized thing.

Wednesday- Work then teacher interviews then catch L's last middle school game of the year then drive 3 players and a coach for the 80-mile trip to Lexington again for the state tournament starting Thurs. (I'm actually about to leave, but a majority of the waking day has ended, as have the first two activities listed) The first day is at two different sites, so coverage is complicated. And modern bus/bus driver salaries are such that you just about have to beg the assistance of parents. Teaching tennis isn't so bad. Moving armies is more complicated.

Thursday- Ky state tennis tourney. Again, multiple locations, time, rain, meals, 12 kids, drivers. I find that I get tired of being in charge. p.s. We had rain and had to travel indoors in Richmond, adding 80 total miles to my weekly total.

Friday- Ky state tennis tourney. Based on seeds we'll be done by Friday's quarterfinals and will roll home. 85 more miles.

Saturday- Z's got club soccer season-end Cup in Versailles, KY, for another 130 miles of driving. Two games worth and apparently there is construction, so the pretty easy less-than-1-hour is now more complicated.
p.s. Day went off without much of a hitch. The team won and tied a team from the upper division and instead of traveling some construction on US60 we took a detour through some horse farm country. Seems like I'm going to have to do a ride there this summer.

Sunday- Z's got club soccer season-end Cup in Versailles, KY, for another 130 miles of driving. I only watch one game and then I roll back to 'Ville for the girls' season-end party, which my pushy Booster mom was insistent was this Sunday although now we get to drive two cars. I just realized that I'm turning in a gas receipt for that.
p.s. Well, I didn't have to suffer the last day, as the wife decided to drive down to the game and I stayed home with #2. I picked him up, and dropping him off again at 4.00 and picking him up later still. And to boot, I got about 30 miles of riding in today. Better. Getting better.

(Notice that there is no riding in there. I have done a couple purely restorative walks in the morning on Monday and Tuesday. I even did bike errands on Sunday and rode with Dave the previous Saturday. I could barely do a 20-miler. I'm exhausted, fat and entirely out of shape. #SummerCyclingSeason)
at May 15, 2013 No comments: Links to this post

There is no spoon.