good things include gardens. it's officially spring and things are officially budding. it's great. i'm sure i'll end up with more plants. i think i like plants as much as bikes.

given that the Mildcats are 2 and through, i haven't watched too much of the NCAA, except to note that one SEC team is in, LSU, and another, Florida, has a good chance. guess those Cats had more competition that it seemed.

here's another big ass house. seems this one belongs/belonged to Wendell Cherry, founder of Humana, a big employer here in the 'Ville. nice place, huh? the back overlooks the park/BeargrassCreek valley. i had to roll up a semi-private drive to get this. sure would be fun to see what else is there, but i'm not that bold. 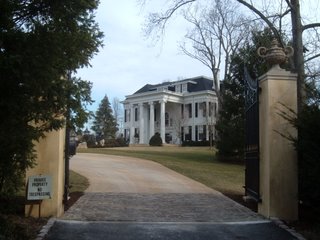 dramatic, eh? desafortunadamente, the cycling content does not involve ME riding a bike. we are practicing tennis at courts directly across from the University of Louisville, home of Rick Pitino's NIT Cards. Now, i personally would've loved for the Rick to stay at UK where he would be on his 3rd or 4th Nat'l Championship by now. instead he followed the $$ to Boston, and then has ended up at UL with a crappy, underachieving team, not unlike Tubby's...I digress.

In my few weeks at the park every afternoon, I've come to notice a couple very regular cyclists that go by. It's sort of fun to see the pattern. It makes we wonder whether other people in their day have see my wanderings as a pattern, at least in fall and winter.

the first is a roadie, long and thin, on a road bike. he's quite tall and i haven't decided, but it might be either a single-speed or some type of racingbike alternative. his mount just seems a smidge different from your standard road bike. he often dresses in black tights and the same jersey, one that i don't recognize with the local teams.

the 2nd is more exciting, a commuter i've seen before. he (she?) is usually decked out in black rainpaints and a yellow and black rain jacket, something you might buy from Performance, not sleek and racy but rather something to get the job done. the bike is a red, i assume, cannondale with fenders and a rear rack. this person is definitely carrying less than i on a regular basis. i've also seen this cat before going down 3rd. GOOD for them.

the next is a more occassional roadie/rider. i can't quite conjure the image, but this person seems to come between the roadie and the commuter. i'll watch for them again.

finally, i saw a dude today on 4th- at the back of the park- riding a funky, Klein-looking mtn bike with road tires. Klein a few years ago made a bike with a thick, fuselage top tube and a thin downtube in a very different looking frame. i can't say it's that frame, but it looked like it. this dude was going slowly on the sidewalk and was wearing a bright green safety vest. more power to him for riding, but get in the street and make some time!

damn, sad. i'm watching bikers instead of being one. maybe this weekend it'll be time for a few miles. gotta get the click/tweak/chirp taken care of on the LHT, but it's time to ride i think.

"The New World" on Monday

it's been a week since my last post, and that's mostly b/c nothing all that good has been happening. let's see:

the Cats got a crappy- but well deserved- 8th seed and gets to play UAB, a team that dramatically beat then 2 years ago. if they get luck and win, they get the opportunity to play Connecticut, a team that will beat then by 20. oh well, better than UL, which got a #1 seed in the NIT, NIT!!! i would've bet $1000 that Rick Pitino could NEVER coach a team to the NIT. unfathomable.

haven't been on a bike in forever. fat, doughy and lazy. shitty tennis. i remind myself to quit every year and don't.

more importantly is that the garden is sprouting. i made a new bed and stuck a nice Panicum "Heavy Metal" in the middle of the raised part. i love plants!

it's been wet, windy and wild around here lately. i see some sun poking out and hope it's a harbinger of better things to come b/c it's been raining since Thursday night.

saw "The New World" the other night. I love Terrance Malik movies. they're so visualing arresting, story be damned. this one was incredibly slow and methodical and uneventful, but it was just great. and at the end, you get an idea of how incredibly hard we screwed the "Indians". they got the shaft big time. it's a great 'sliceoflife' encapsulation of that moment of contact. it's not a movie for everyone, but i would see it again in a heartbeat.
at March 13, 2006 No comments:

i'm just NOT getting ANY miles in. damn.

that said, spring is peeking through, and my gardening jones is following. man i just LOVE to garden.

today i finished building up a new, mounded or "raised" bed in the front. i had previously had a smallish oval thing down towards the front of the yard surrounding an old holly tree stump. late last summer i created another clumpish "bed" in some dirt that was terribly dead, i think, from the neighbor's exhaust backing up out of their driveway. i connected the two and made a kidney-shaped bed and added a Panicum HeavyMetal clump in the middle.

i might start a new blog abt just plant stuff. we'll see...and i DO plan to ride eventually. Wednesday, that'll be the day when i'll take the plunge and get back on the horse.
at March 06, 2006 No comments:

last saturday i took the pics, so now i'm going to introduce on occassion some of these great old homes in the area, some true estate homes and other tasteful "suburb" homes of an earlier era. i'm generally terrible about street names, although i know exactly where i'm going, so i approximate the location. 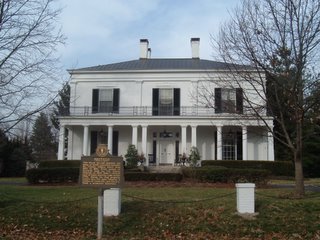 the first is "Hayfield", which happens to be only a mile from our house. it's early construction is late 1700s- which is quite cool. from a notsosure recollection, the school that sits near our home is situated on land that was originally part of the estate. an interesting, or maybe banal, fact is that the former superintendent of the public schools, for which i work, lived in the this house and his kids went to my high school. a certainly interesting fact is that they were Christian Scientists and therefore took no medical care. henceforth they weren't inoculated against measels and proceeded to get them when all hte other kids didn't. sort of fun. 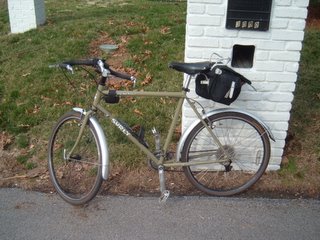 and here is the LHT leaning on the mailbox (not original) of Hayfield. prob can't see much detail, but it's there in all its glory.
at March 03, 2006 2 comments:

Refused to answer the bell

i'm posting Friday a.m., but really this is in reference to Wednesday. i don't have any tennis commitments on Wednesdays, partly b/c i wanted one day free to keep my commute going. the problem is that, wednesday, i didn't answer the bell. it was rather clement, now that i think abt it, 70 friggin' degrees clement, but i just didn't do it. i'm tired. don't know abt other blogger folks out there, but now that tennis has started, my days go from 7.00 a.m. to 5.00 p.m., with steady- and sometimes uproarious- activity in there. the most difficult thing about teaching is the notion of having 75 different interactions per day, which is to say 75 students to whom you have to connect with. on our alternating schedule, that becomes 140 different people to "get through to", plus all the standard gobblygoock thrown in there. now, tennis extends my day 2.5 or more hours and brings yet another layer of paperwork, personalities, headaches, you name it.

so wednesday comes around and i just don't answer the bell. next wednesday must be better. i hope.

this of course doesn't count matches when the day is extended even longer, perhaps until 7.00-8.00. whine moan complain.

i want to ride. i just want to rest a bit too.