Busy, busy, busy, but yesterday I had a quick match (girls won 60-3 total games!) and in lieu of disappearing on the couch for the post-work swoon I jumped on SeaFoam to get some vitamin D and endorphins.  The 65F sun helped enormously as well. Not feeling aggro or even sprightly, I did the BeargrassTrail/Frankfort/Cyclocross park out-n-back mostly to try out some new binoculars I recently purchased- Zhumell 10x42 Short Barrel Waterproof Binoculars- along the cyclocross park bridge where I had previously seen kingfishers, herons and other. Yesterday's bird bounty wasn't so opulent with a cardinal, some mallards, and a family of swifts under the River Rd. bridge.

Long Short? I intended to ride from home to Masterson Station Park in Lexington, KY for Z's soccer game at 3.00. I left quite early and met up with PJ close to his home, along our route to Shelbyville where he would turn around for a 50-mile day. Instead, what I found on the 9 miles out to meet him was steady headwind exactly in my day-long direction, and not just a headwind, but a cold, cutting headwind. While we've broken through to Spring-like temps, this morning started out in the upper 30s and it was just cold. And I was pretty miserable.

We briefly stopped at a gas station so I could buy an extra pair of jersey gloves and then followed our tour through Anchorage. Aside the wind and cold I just had *nothing* in the legs. Empty. On the far side at LaGrange Rd., not quite 15 miles from the house, I pulled the plug on the full 80-mile route. What was to be on a free Sunday morning was cooking up a pot o' whoop-ass and was making for an anxiety-ridden death march. Why bother? We extended down Aiken Rd. and turned left at Ash Rd. to make a loop back into Anchorage where we ate- for the second weekend in a row- at The Anchorage Cafe, where a cup (or two) and an egg sandwich seemed to lift the spirits and the legs. I dropped PJ in his neighborhood and then found that headwind from the morning, this time blissfully at my back, propelling down Westport. I raised the tempo and felt good enough, whether be wind or eggs, to turn towards the river and do a second spirit spin down River Rd. before turning back up the Beargrass Trail. 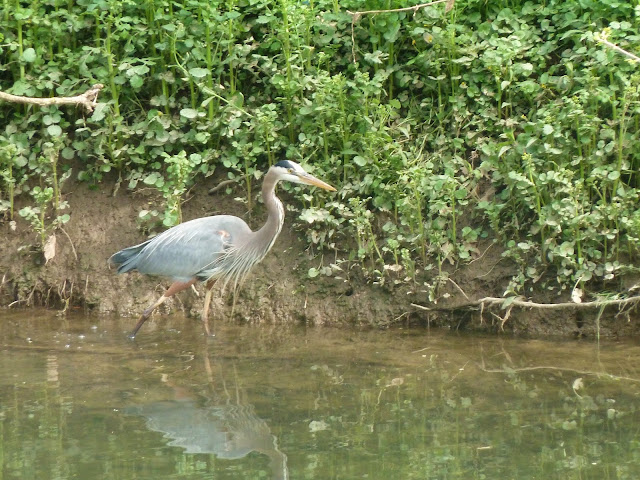 If you read this blog enough you know of my occasional sightings of 'Ol Blue. You would think that repeated sightings would make me tired of it, but in ways I like it even more. At the time I should have been prowling somewhere between Shelbyville and Frankfort, instead I was taking a pic of the bird before rolling through Cherokee for home.  SeaFoam gave me a very favorable ride, but in the future it needs some road-ish tires instead of the 2" touring behemoths it has presently.

I was disappointed for a while with my abandon; it seems to reflect a questionable and weak character. Only later did I come to appreciate the 50-mile effort in the cold and breezy. It was certainly more invigorating than a morning on the couch.

It's that whiny time of year for me, so any mileage I can steal is the better. Saturday provided an all-day tennis tournament where I could stand around and build frustration. Saturday evening Lithodale came to the rescue with a night-time ramble where we put in a casual hour during which he spun and jra'd and I worked a bit harder to burn off some pizza.

This morning was more the main event, a Sunday morning roll to inspect the doings at "The Parklands of Floyds Fork", the name belying the location of these new parks in the 'burbs where they always contrive ridiculous names that sound like a subdivision that has razed many an attractive meadow. The first of this string of four large parks- Beckley Creek- opened recently enough, so ErosPoli and I used TaylorsvilleRd. and outer J'town to link to the "Egg Meadow" ("Lawn". Whatever!) portion of Beckley Creek. I'll skip all the headwind false flats that made the first third of this ride a grind. Once at the park we found that it's all very tasteful and new so it looks great, but Mr.NegativeNed had two thoughts jump out. First is that much of the road and path (that is part of the LouisvilleLoop 100-mile loop) is going to have the same high water problems as the Riverwalk does. It runs right along Floyds Fork and it *will* be flooded at some point. It's obviously specious planning. The pic below shows how close it is to the waterline. Secondly, and it's something Poli and I discussed at length, is the total lack of connectivity. Our exit along Beckley Station Rd. provided us an opportunity to asses how one might travel from your home to the park. BSRd, instead, is a very narrow, dangerous road that no one in their right mind would travel with children. At the northern end at the exit of Miles Park you run into Shelbyville Rd. a 4-lane main state highway. You *have* to drive there, further befitting the contrived 'burb name. Recently the 'Ville scored poorly- 1 bench out of 5- in nat'l urban parks rankings, aka ParkScore. I thought this was ridiculous; our Olmstead Parks are beautiful and highly-used. The rankings, although they do include acreage, also include investment and...and...and...accessibility. The northern-most strand of the PoFF couldn't be a more obvious example of this. A third thought which I had forgotten, was my contention that the new parks would siphon off resources of the urban parks in the downtown area. It's only natural. 'Burb money will talk, and the competition for resources will pull investment away from basic services like bathrooms and potholes in current parks to maintaining flooded for wealthier surburban dwellers accustomed to getting their way. That's my pinko analysis of it, which I arrived at before taking a look at ParkScore, which agrees with me.

After the Beckley/Miles exploration we linked through the largest suburb in JeffersonCo and later gnashed teeth with overly-eager churchists to eventually link to Anchorage where we stopped for a delightful cup (and quiche. Real men eat quiche!) at TheAnchorageCafe. ErosPoli's day was almost done with the short connect through Sawyer Park. At that point from all the headwinding I suffered earlier in the day, I took the opportunity to bomb down Westport with a solid tailwind and put together my quickest laps of the day to finish up with 42 miles of clement, sunny, 'Ville-drenched cycling. *Much* better than watching other people's children play tennis. (Don't forget SeaFoam!)

p.s. I had a LouisvilleLoop discussion a couple years back with a former classmate who works in some capacity for the city and the Loop project. My complaint at the time was that is seemed like a LONG liner park with very little thought to it being used to GET places. My 2-mile window on this new portion recently added confirms my opinion as strongly as possible. It's a toy, not transportation.
at April 14, 2013 5 comments:

With the arrival of SeaFoam, my previous touring rig- the Surly Troll- needed a new home. And a new home it found today, off to Colorado where I'm sure it's 26" fatness will find favor.

I'm convinced that bike is a good one, but not for my own full touring needs. As present, SeaFoam has been rock-solid and I look forward to giving it a workout sometime in the future.
at April 04, 2013 3 comments: