I like to read blogs, and I like to post adventures on blogs. My lack of posts would suggest a lack of adventures, but that's not entirely correct. Like other corners of the blogosphere, a combo of G+, Twitter and a little FB have taken my on-line time away. Since my many readers are begging for an update, here is October:

Right, October so far as been light on riding save one crazy experience, the Crush Challenge which took place a week and change ago in Napa/Yountville, CA. My father (and occasional benefactor) saw a link regarding wine, Napa, and Levi Leipheimer, Christian Vandevelde, and Bob Roll. He inquired on my end if I knew "who these guys are". That got the ball rolling and before long I had accepted the offer to go out to Napa to do the charity ride and then attend the fundraising dinner that evening. Fact is, the CC is a cancer fundraiser for several CA organizations in its first year of infancy. To sweeten the pot even further, my dad invited Drew out to attend as well, I guess, as a good faith effort to spread some good vibes given his recurrence.

That Thursday was for flying, meaning Friday was the "wine day". Things got interesting Thursday when I received a text from dad that we were not going to stay in a Spring Hill Suites, but rather would relocate to something called Meadowood, which was a "resort" tucked into the hills of Napa Valley. Holy moly! We arrived late but marveled at the sky full of stars. We awoke (separate beds. I gave Drew the bed to help prop up his arm, and I took the couch-bed. All good) the next morning, Friday, to find a bungalow with a nice deck overlooking the CA oak woods full of birds. Peaceful. Eventually we got out for a nice breakfast, really fresh breakfast...and, of course, the obligatory professional croquet course. 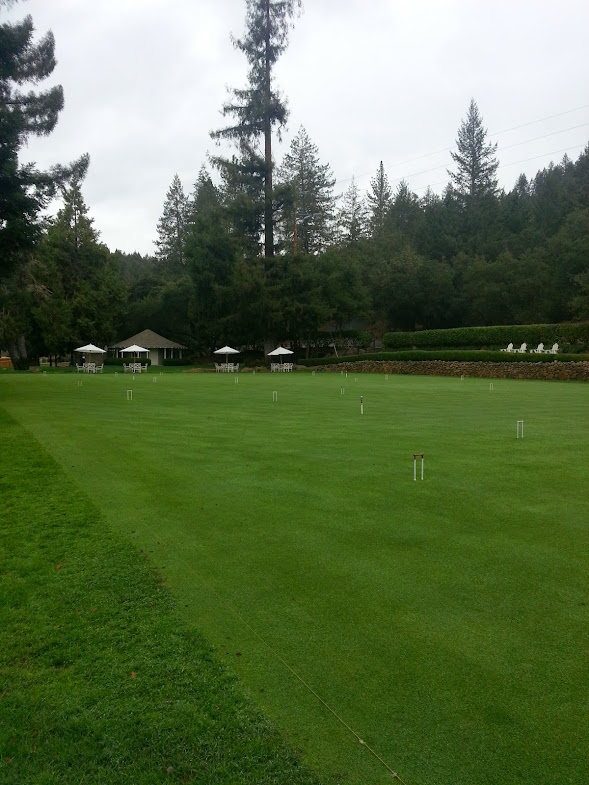 We first visited Darioush, which, however gaudy, makes some fine juice. After that came the amble up to ZD Wines, which one was of the sponsors for the CC. I'd say the 2 hours we spent at ZD were 2 of the most relaxing on memory. We sat on the patio, had fresh bread, salami, cheese, and some more juice, all while the sun shone down and warmed up with humidity-free temps at 70F.  It was just relaxing, nothing less. 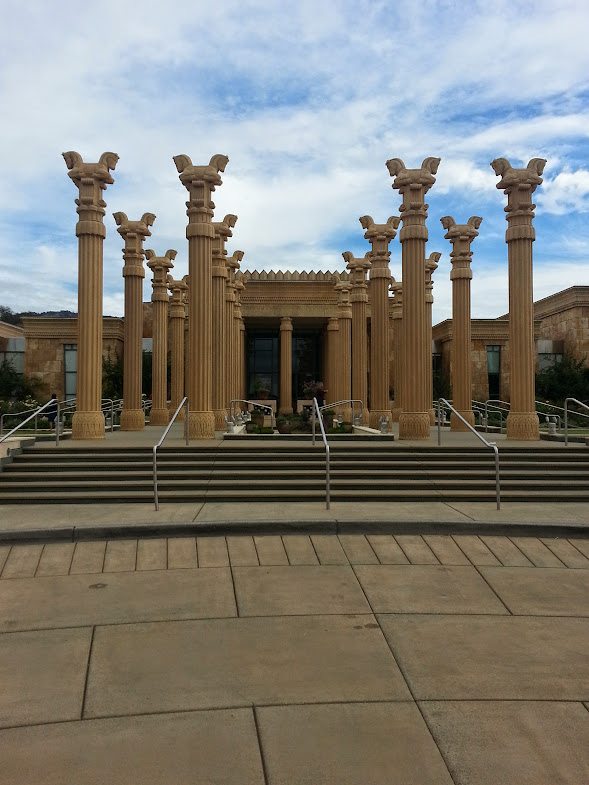 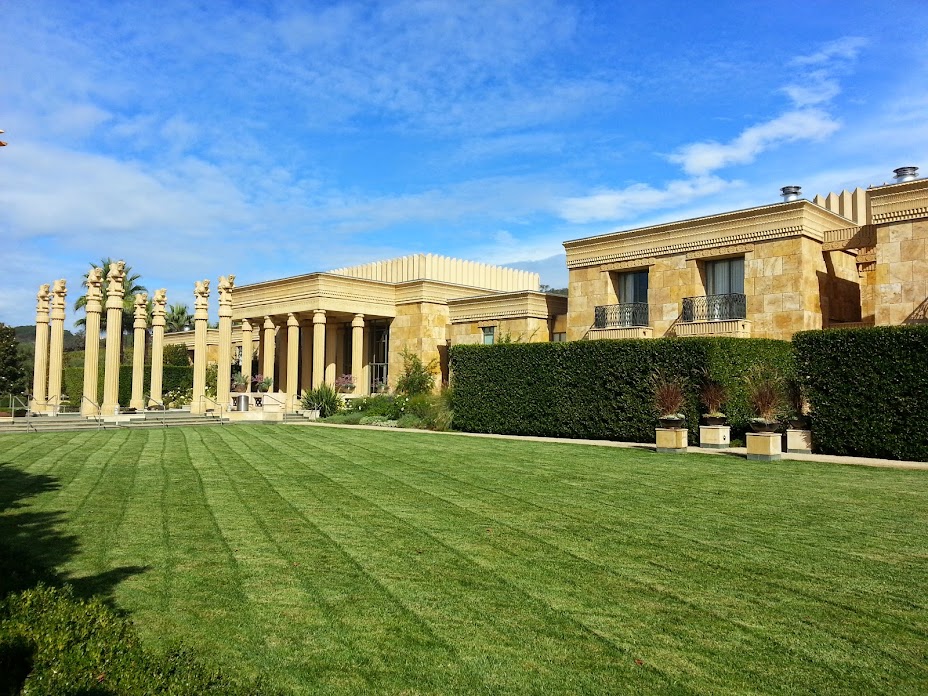 Darioush is sort of ridiculous and sort of cool at the same time. Iranian stone went through multiple exchanges to legally come into the country. The pistachios are really good and I'm still bummed to have not bought some. 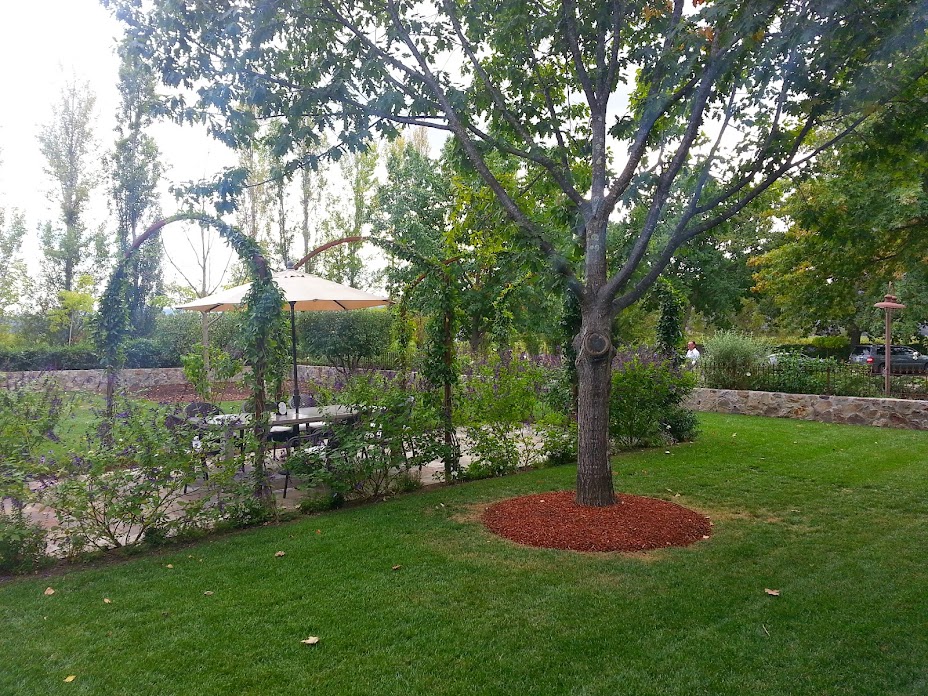 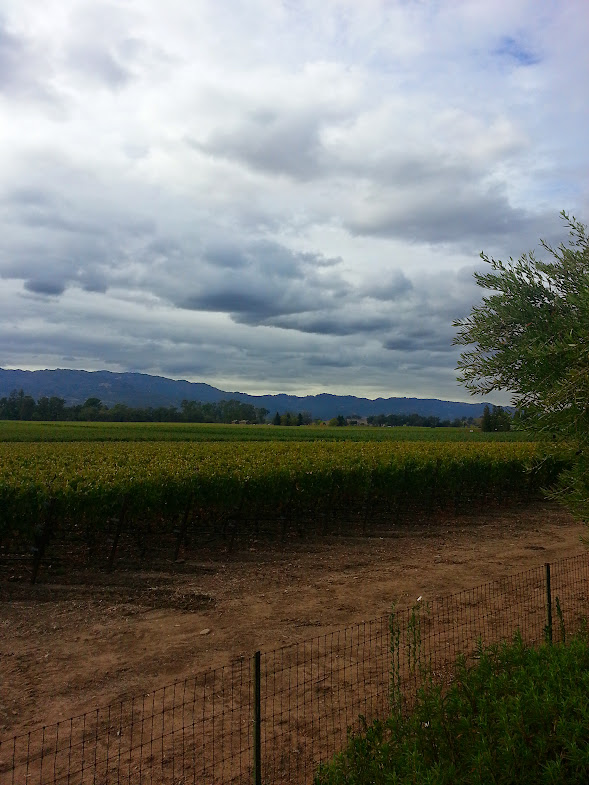 This is the scene out the second winery we visited, a name I recognized. Funnily, their set-up sort of blew (had to pay too much and order too much. We just wanted a glass), so we moved on. 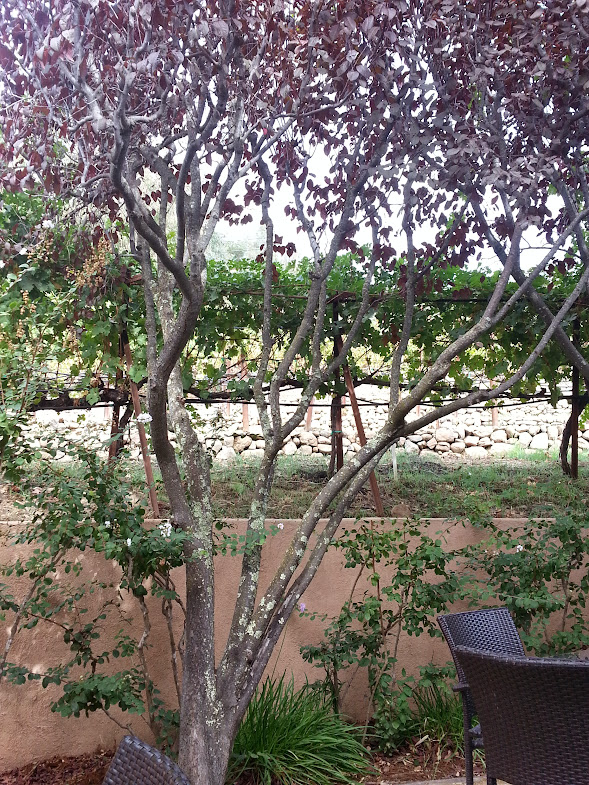 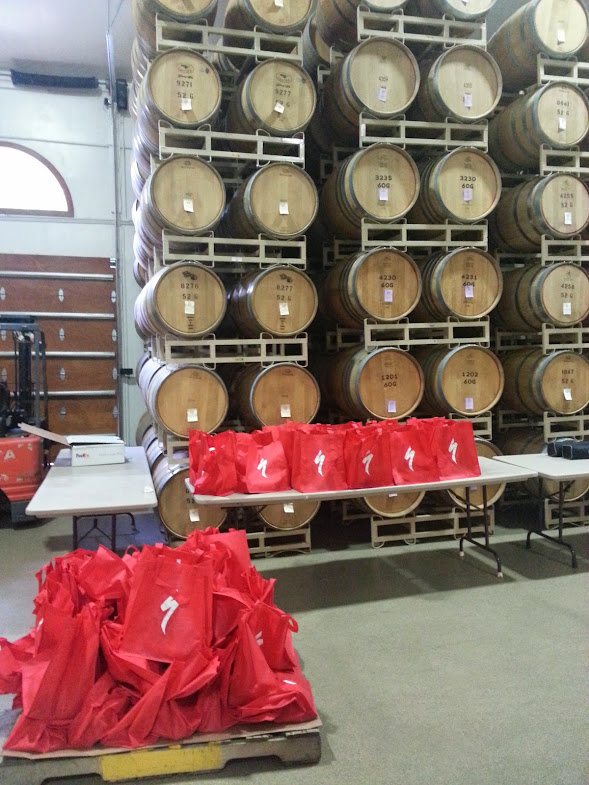 Crush Challenge bags next to the Cabernet. 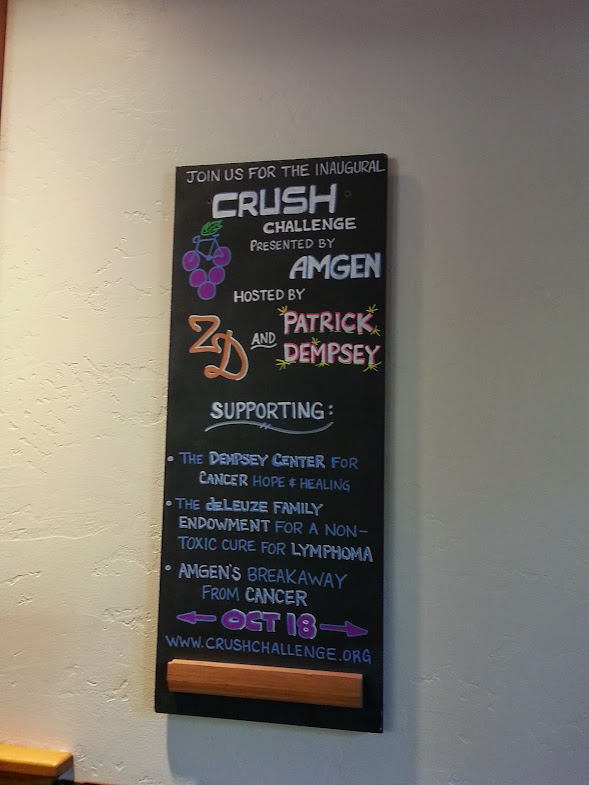 The event board with more information. 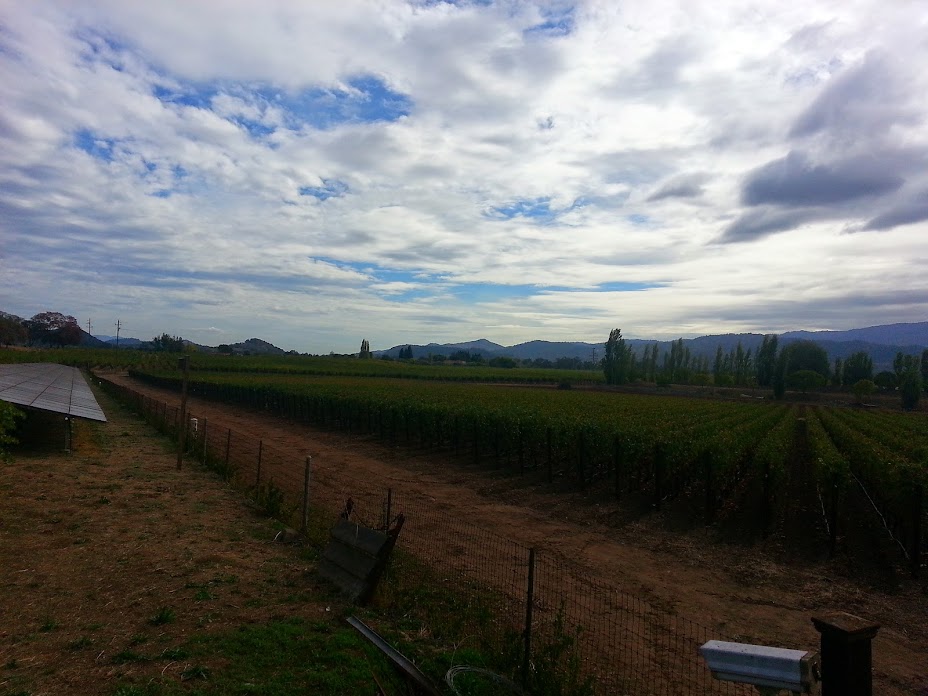 Not sure why this came out so dark. Perhaps it's foreshadowing of things to come.

Sufficiently winey, we returned to the "resort" for a little chill time before dinner that night. At some point Drew and I decided we were hungry and ordered some mid-afternoon food, and what food it was. My dad was surprised to learn later that evening that we had snuck and extra gourmet meal in there somewhere. At some point in the evening we went to Cindy's Backstreet Kitchen in St. Helena up the valley a bit ,where we had yet another ridiculous meal. Honestly, though, some of the magic of the day was that with the meals (3), wine (1+), and snacks, I never felt boozy or overly full. I both ate and rejected in appropriate proportion and just had a balanced, relaxed, beautiful day. Great stuff now 1.5 weeks later. 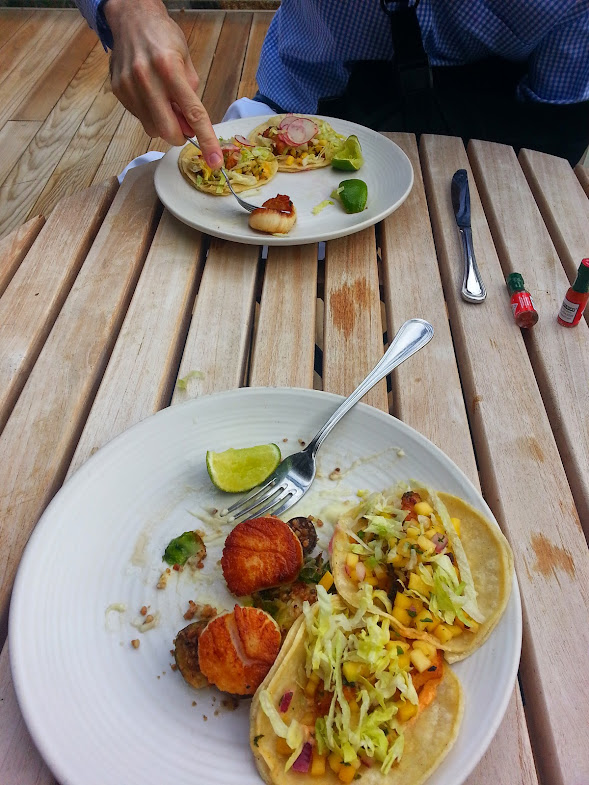 "Lunch", of scallops and fish tacos, all very fresh. 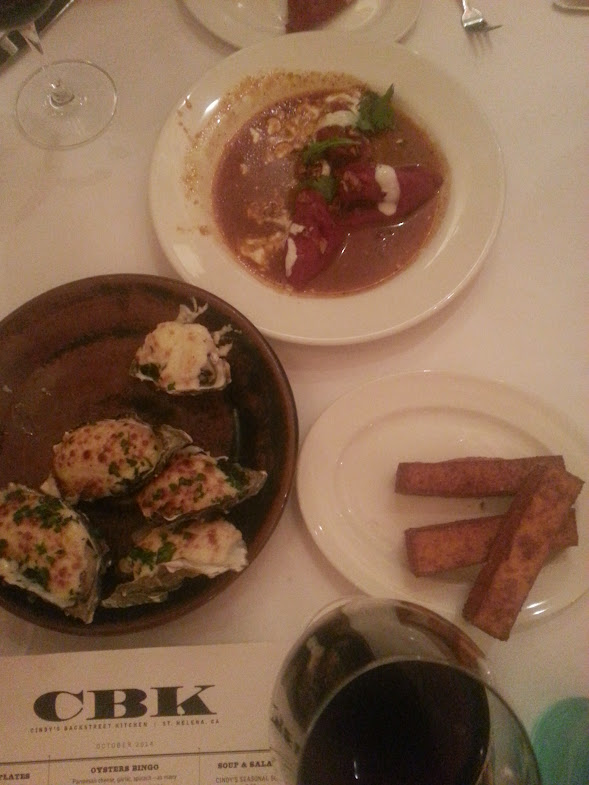 Apps at Cindy's: oysters (too rich for me!), polenta fries, stuff peppers.

Saturday was ride day, and my many fans can testify to my  trepidation. I was thinking, "California, rich people, West Coast, Left Coast". Oh, and remember the nexus of the story, which began with 3 or 4 famous American pros. The images stirring in my mind were of little, tiny ultra-fit type-A roadies on all sides. #Fear I arrived early to find my bike rental guy meandering about a bit an talked to him briefly. For the grand ol' price of $120, Duke at Napa River Velo set me up with a fancy Pinarello Dogma- full carbon-, which I guess was the most expensive bike I'd ever ridden. He delivered, adjusted, and removed it, all for what I thought was a really nice price. The morning was making out to be spectacular, as the photos will attest. 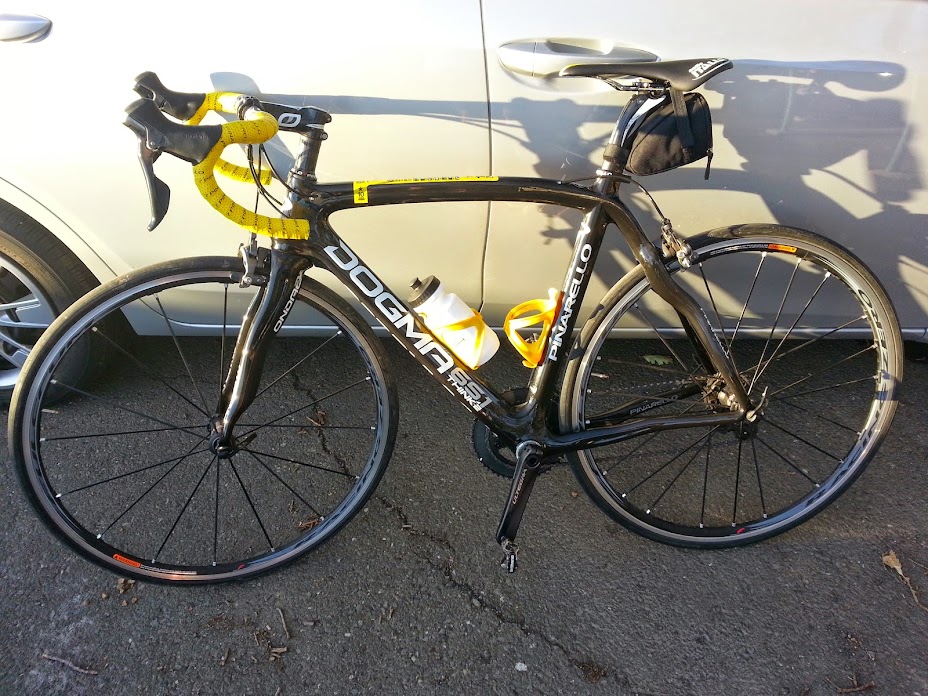 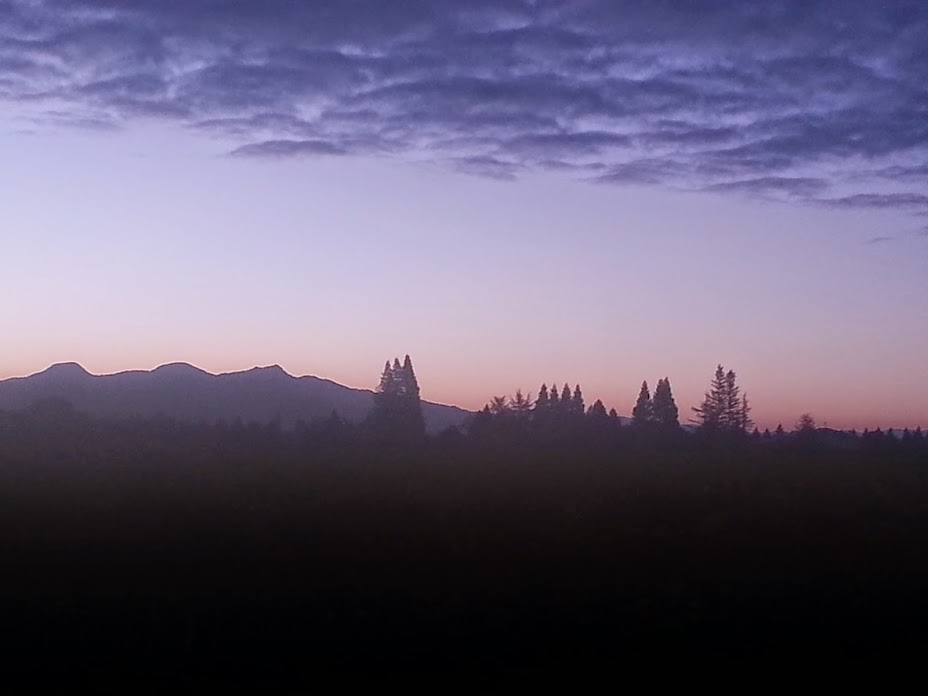 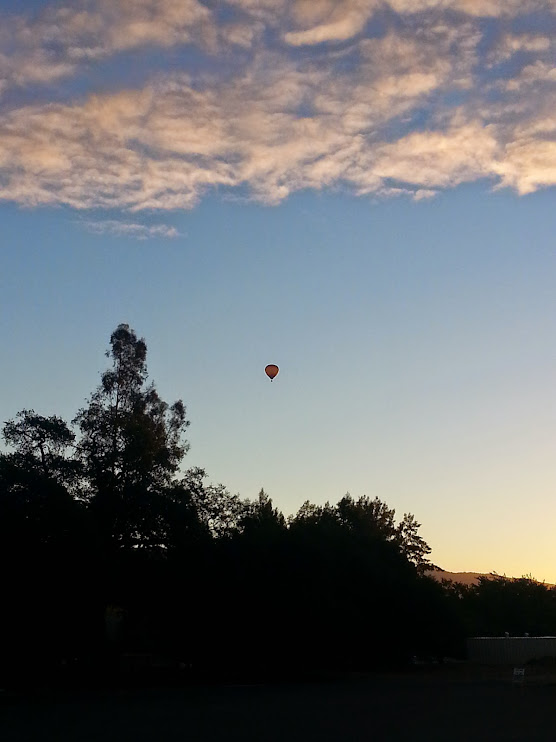 It is at this point where my visual story ends. My phone of 2 years just up and died. Wouldn't boot. No pics. No gps of route. Nothing.

The ride circled through Napa Valley with its straight, flat roads passing vineyard after vineyard after estate. Like so many group rides of this nature, the flyboys and flygirls went off the front, the slowpokes in back somewhere, and I was in them middle. I had been trepidatious about the climb coming up after the first stop at a 1/3 empty reservoir. Cali, you know. I set my own pace, passed a few folks, maintained my own pace, passed another couple, was passed by a rider wearing a cool stars-n-stripes kit who bade me "hello", and towards the top passed a few more. I wouldn't want the Pinarello as my full-time rig, but it was stiff, fast, and light. It got the job done.

What goes up must come down, and I began the long, steady decent with a big grin. The terrain had added pine to the prominent scrub oak, and the road cut through an area with no settlements. I zoomed down at a healthy speed, but at only one point did the grabby Shimano brakes give me a pucker moment. I suspect that's the longest decent I've every done, some 5 miles. I stopped again at the rest stop at the end of the lollipop to find a big group of pros and flyboys chit-chatting as I filled my water bottle. It was all much more chill than anticipated. The highlight of the return was a visit en route to ZD wines where they had wine and snacks while overlooking the vineyards. That was the one time I wished that I had some company, someone to enjoy the scene and vibe with. Shortly thereafter I hopped on and finished the route, funnily finishing in front of the pro crew, who stayed to to enjoy the fruit drink of their labor.

Drew, my dad, and his wife meet me for the post-lunch at which they basically ran out of gourmet Cali food. Oops.  Big party foul, but the same night we attended a fancy dinner in the upstairs of a wine barn where many of the same pros and dignitaries (Carl Weathers! who was very eloquent as it happened) attended and sometimes spoke. We had 5 courses of amazing food paired with amazing wines; remember the chef name of Hatfield. He's an LA-based chef who prepared a slow-cooked beef rib that was perhaps the best single dish I've ever had. AND he was the guy in the stars-n-stripes who passed me on the climb. Fit and talented. There was a silent auction where the proceeds went to the various cancer organizations, which is what spurred the ZD organization to sponsor the event with Patrick Dempsey. They're all active in cancer support. I was really glad Drew got to go given his difficulties, and I was glad for myself as well. It was a truly magical weekend and experience. Thanks, Dad!