Another batch of "exercise". What began as a 54F afternoon has turned into 40F with gusty winds from the north. I rode right at an hour and that was plenty. I even got poor Precious slightly mussed in the rain/sleet. Hardman, I am.
at January 29, 2015 No comments:

I was waiting for someone to mention my stupid template for the blog. John who is snowed in wins the booby prize, so now I can change back to something normal.
at January 28, 2015 1 comment:

Email ThisBlogThis!Share to TwitterShare to FacebookShare to Pinterest
Labels: blogs

Post-work today was the third "training ride" in a row on the fancy bike. The Compass Stampede Pass 32s are soaring along and the bike feels great. Today I ran into one of the proprietors of fav shop OYLC and he dragged me along for a solid 40 minutes of tempo action. We discussed wine, food, girls, rides, bike nerdabilia, and I have a great ride, all of it intentionally in the small ring. I was getting my spin on. Yesterday TS and I did a spirited 35m of tempo through Iroquois and the West End. For all three rides, it felt great to be cyclist-like and hope to do more of it in 2015. Last year was a pretty mundane year for miles; this year I intend on it being banner one. Last year I only did 11 rides on the IF; this year I already have 4.

We even remarked that, for some reason, we don't do S24O's as much when it's clement; instead we wait until the dead of winter for a grin-and-bear-it experience.  Our Friday meet-up happened post-work, but we did sneak in a pint at Great Flood to send us on our way. It was good to have Asher along, as I personally hadn't ridden with him in some time. 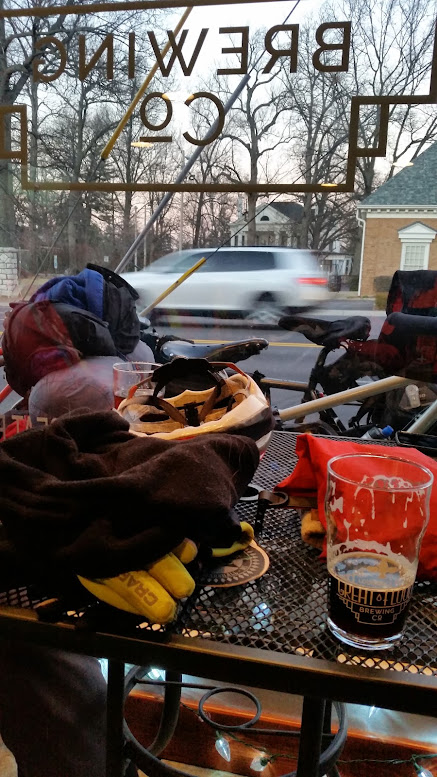 Our roll out presented the usual travails: pee break, dead battery break (combined), crappy slow legs (fortunately not mine), impending dark and cold, even more cold (definitely me!), and finally the slow, steady slog up Holsclaw Hill. That was after we lost Asher and Dave for a bit, as they went straight while Timothy and I went left; they didn't see us amid some traffiky traffic. 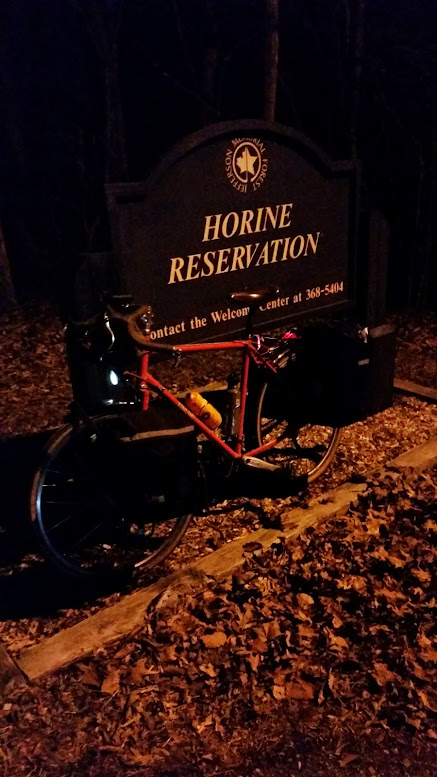 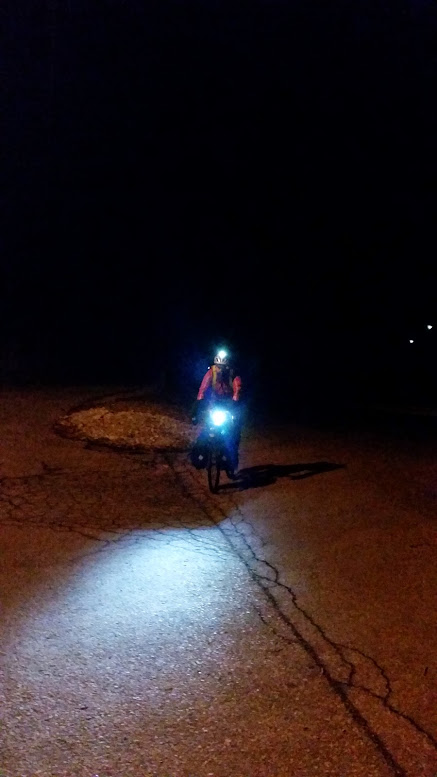 Timothy at top of Holsclaw after a 1k loaded climb. I was happy to climb because it warmed me up.

Big props, ShoutOut, and adoration to Timothy for his camp skill once we arrived, as I was really cold and the only real thing that interested me was adding layers and eating. While the rest of us chose prime camp spots and starting heating water, he got a fire going using a hatchet technique to make many small slivers of firewood. It worked well and the fire remained toasty the remainder of the evening. As to the food, it seemed like no one went for camping food chic, so all of us dutifully inhaled our salt-laden, freeze-dried meals.  Asher went to bed rather early, so I used that as an excuse to do the same. Ultimately, I was cold. Not long before leaving I had thought to grab an extra, thin fleece layer, but my ADD kicked on to the next topic, and I suffered being a torso layer down pretty much the entire trip. Duh! 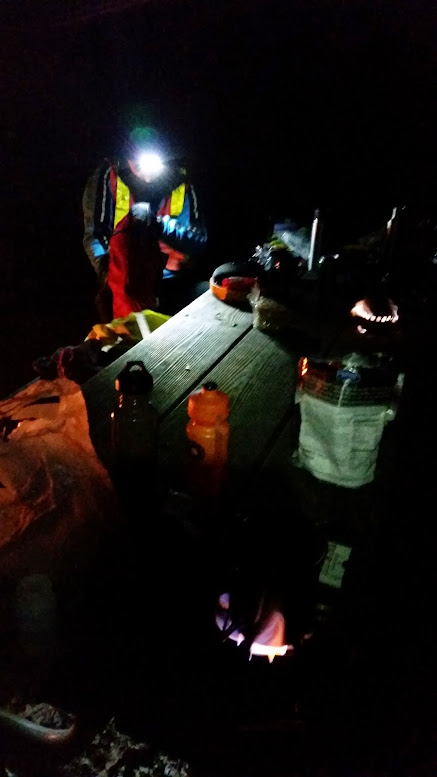 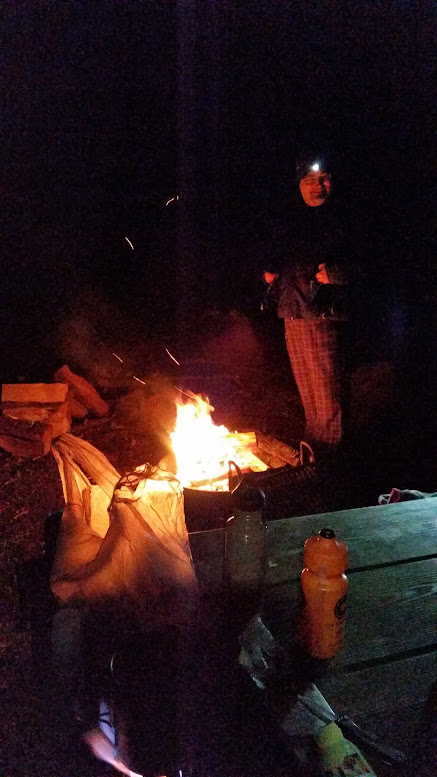 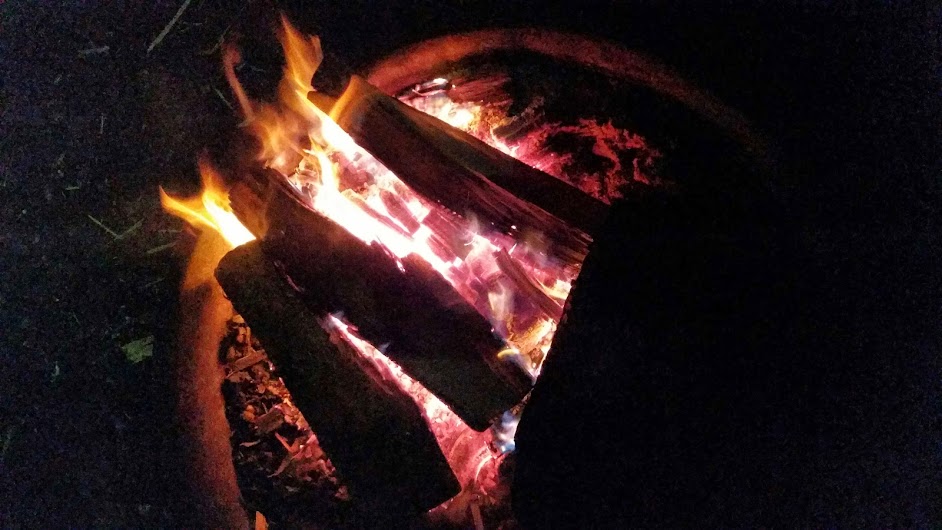 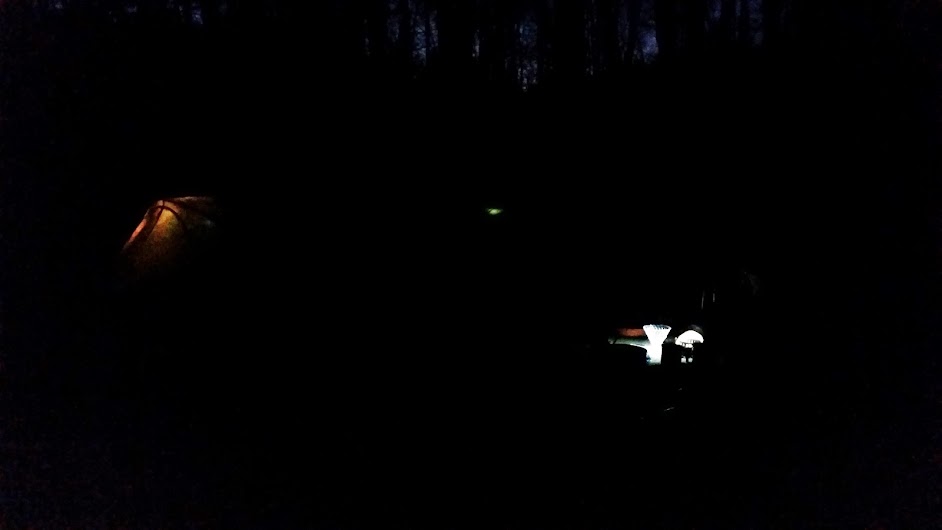 Funny, camping. Doug from MN, who now has a twitter but no blog, has often waxed poetic about sleeping better outdoors. Pondero seems to do pretty well for himself. I, to the contrary, have had about 2 good nights sleep in my many years, and Friday was no different. After a previous cold S24O, I purchased an Alps Mountaineering 25F bag from somewhere. I've used it before and didn't particularly like it, and this trip was, again, no different. To call it a 25F bag is disingenuous or even farcical. The temps hovered in the upper 20's, but I was COLD, even though I had on 2 leg layers, 1 torso layer, 2 sock layers, a boggin (check this out for more "knitted hat" info), and eventually gloves, a full body layer. The bag isn't warm and I can't get the last 4" to zip for some reason, so there is an absurd draft that comes in from time to time. It's time to spend some $$ and do better for myself.  On the other hand, I did try out the new tent to much success. More on that to come, perhaps after a second usage, but the Nemo Galaxi 2p set up super easily and has much more room than my Alps coffin.  I suspect it's a bit too large to pack for a bikepacking situation, but for road touring and car camping I think it'll do well.

Both Asher in orange and I in green were trying out new tents. Success. 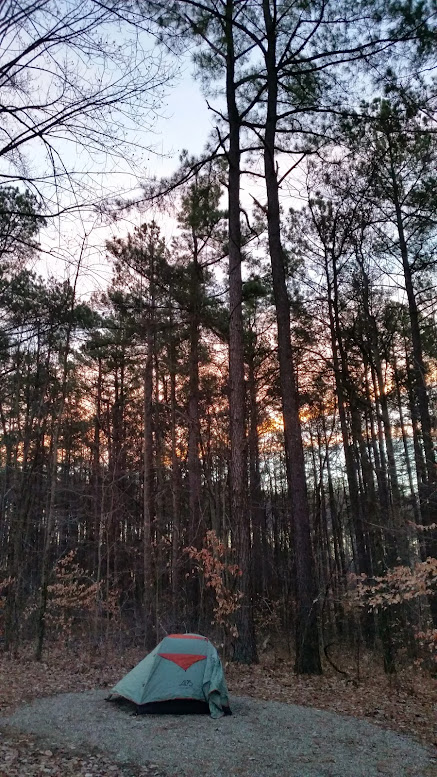 It was cold on rising, but there was coffee. I'd say the 30min of coffee experience was my favorite part of the trip. It was cold but not too much. We were greeted with a nice sunrise. The air was crisp. And the coffee exceeded the Starsux via routine.I'll do both a tent  and a coffee set-up review sometime in soon. I promise. 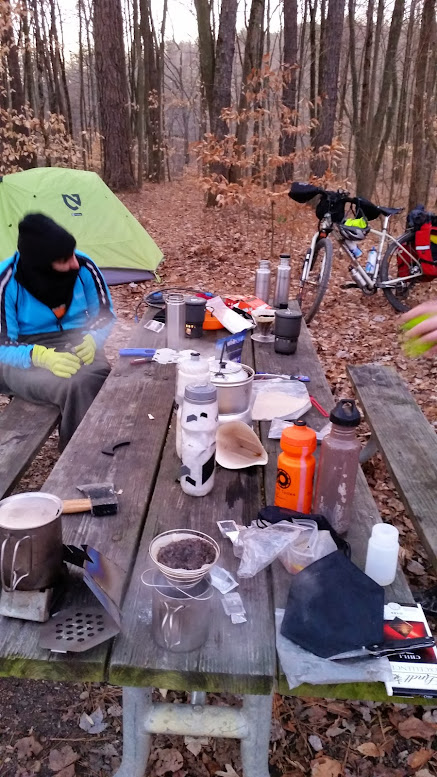 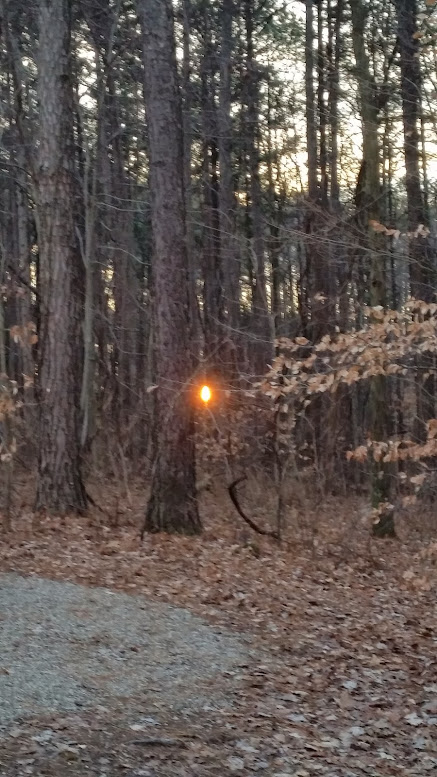 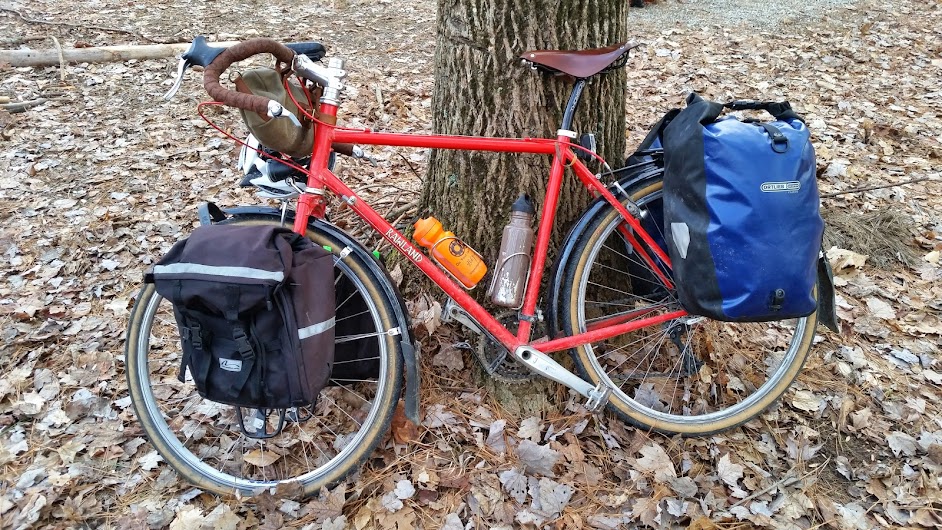 Sogn in touring mode. I sold Seafoam for several reasons, but ultimately I like the cSogn better. It seems to carry the weight more solidly, the positions available work well, and increasingly 650b tire selections are more interesting. I fought a bit to get the OMM on the front, but it was adequate for this trip. In the time to come I will remount the Noodle bar and will brake post-mount the OMM. The Sogn will cease being a stripped-down gravel and mixed-terrain machine and will go into commuting/touring mode for summer. It's a great bike. 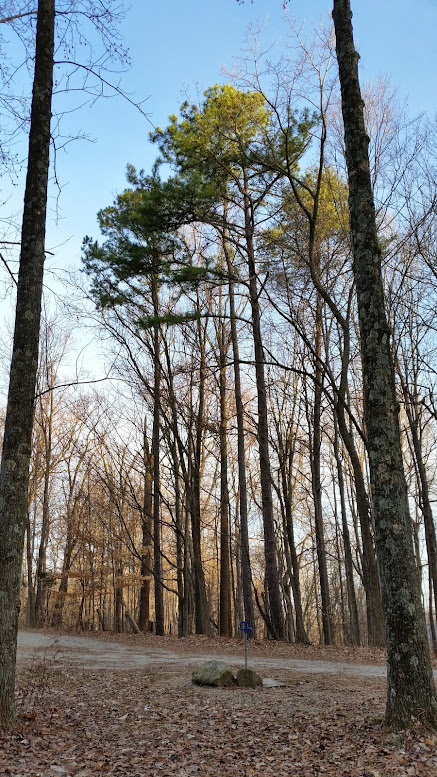 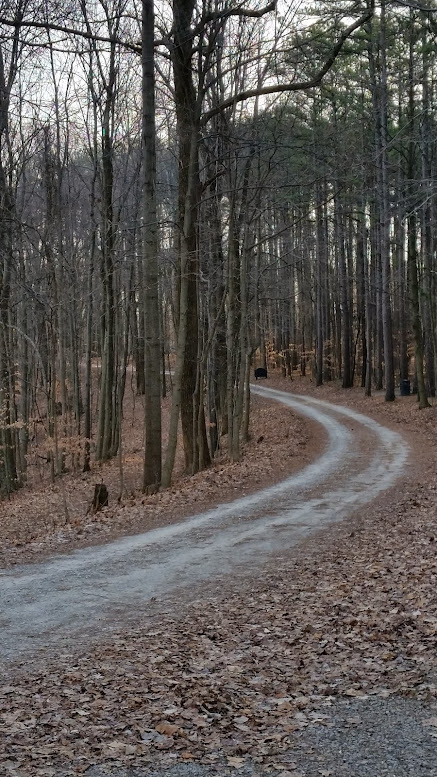 This pic encompasses what I like most of the Horine campground. It's only gravel for .1 mile, but once you enter the pines and gravel it's a slightly different place from when you came. 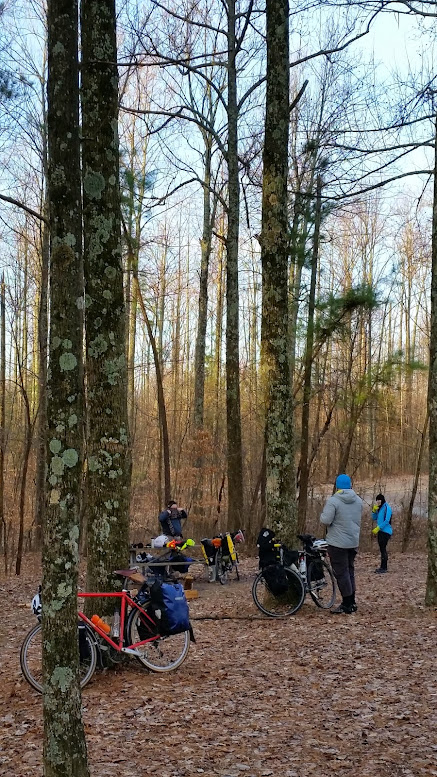 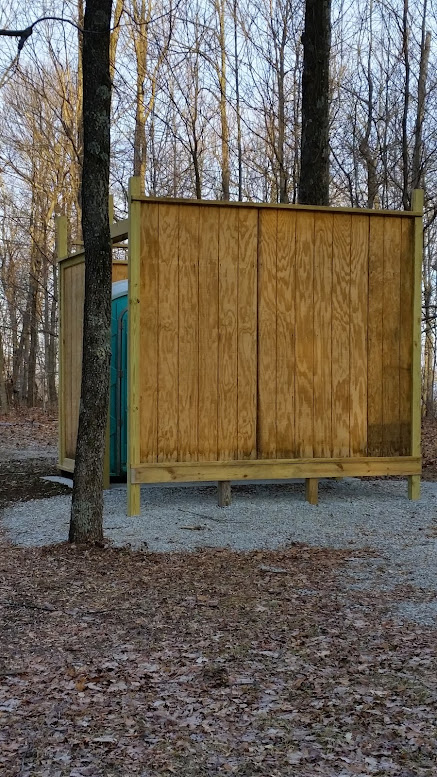 Can't have the public knowing that there are portopots out here!!

Our return leg was a relaxed one, as some of us didn't sleep as well as others, less pep in the step. Asher bade adieu near his house to attend other events, but the remaining 3 Stooges plodded to our usual Twig-n-Leaf pancakes and assorted proteins. I was SO cold and slept SO poorly, but it was a really fine time. Sometimes you need a little #microadventure.

Damn I've had some turnover. I wish I still had the LHT. I don't regret any other sales and generally like the status of the stable at the moment.


**I'm numbers retarded, so I take ownership of the problems here. As I see it, some rides were put into mycyclinglog but were not marked with a bike (which is circumspect). My totals don't match between this table and mycyclinglog, but dammit, Jim, I'm a Spanish teacher!
at January 01, 2015 2 comments: