Dave, Apertome and I undertook a really, really interesting journey yesterday out of Ferdinand, IN, an hour's drive from Louisville. As my 3 readers of the blog know, I've been studying maps, specifically using googlestreetview to ascertain the makeup of some particularly rural roads in that area in search of new-found Vitamin G.  I'm going to divide this in 2 parts b/c I want to load lots of pics, many of which show the brilliant combination of fall color and the jagged stuff I was craving.

We left Ferdinand with an easy rollout but met the rough stuff just 3ish miles in with a dicey downhill gravel descent on Mariah Hill. From there it was a box right and left and left again to get us onto W1200S, which was a nice long gravel/pavement portion with some rollers thrown in to wake us up. Towards the end of 1200 we encountered our first real fun of the day with a short portion of "not road", really a tractor track with some serious textured ruts at the top. At the end of this section Apertome had the shock of his life while passing under some electrical lines. Literally he was shocked at several points on his body and I don't think he was too happy about it. 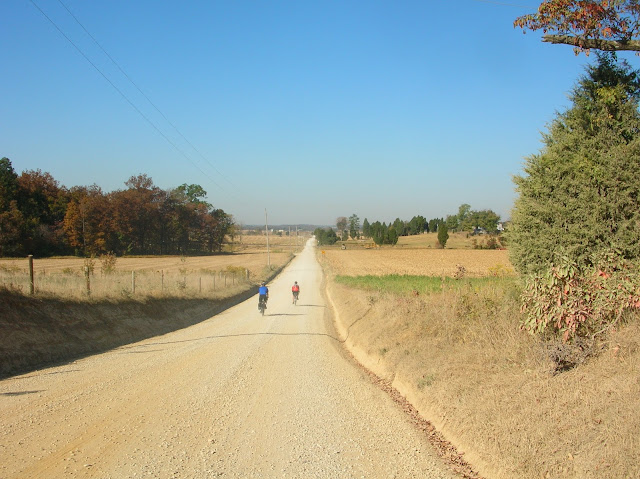 Early gravel down in the plain, the only bit of the day. 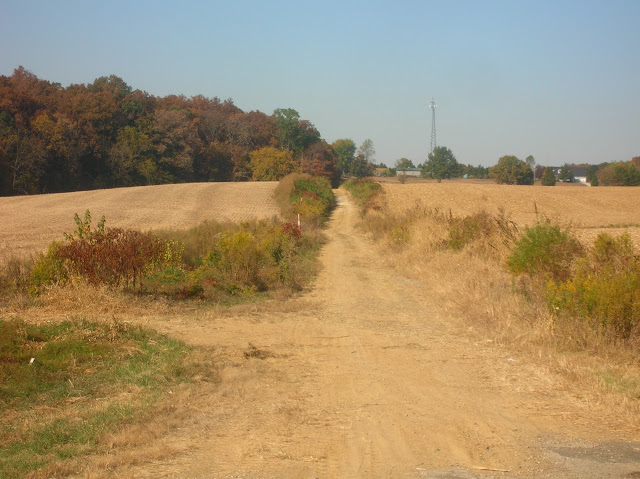 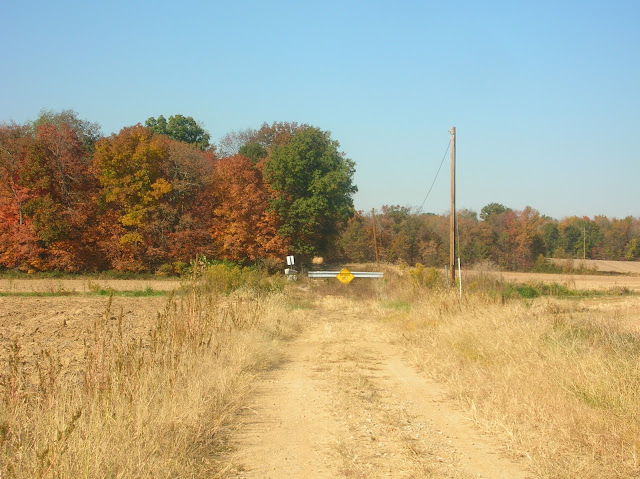 Good I changed the plan and didn't go that way.
We then turned north on more gravel before running by some houses and turkey farms. We took a hard left on W1000S and found our 4th terrain of the day-after pavement, gravel and dirt-, in this case small pea gravel that, I suppose, was to be covered by the seal that's so common in these parts. It made for some strange footing on occasion, but we weathered it easily.  This section helped us arrive to Ingram Rd., my personal fav of the day. 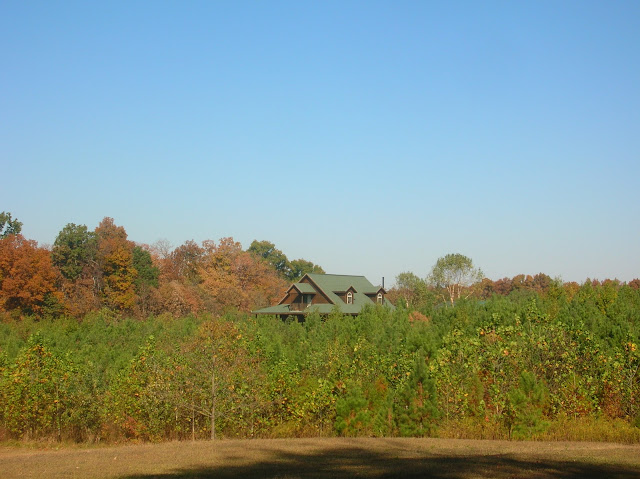 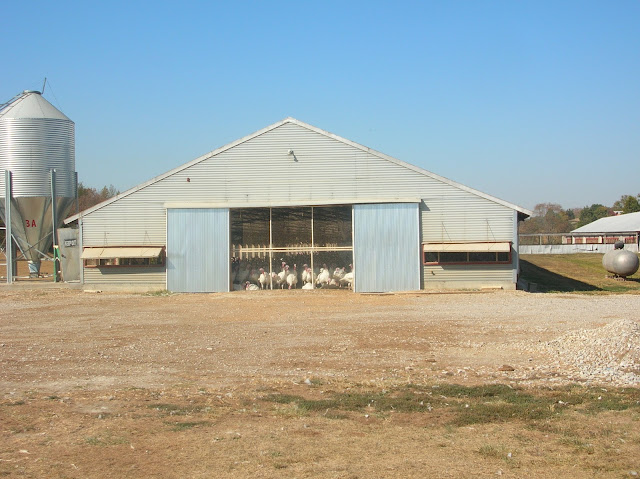 It is mid-October. For whom the bell tolls?
While traveling Ingram Rd. I imagined myself in Vermont in the Fall. It had a bit of everything, forest, foliage color, unseen bends, crops, vistas, gravel (of course) and just a really, really nice flow, including a bridged creek crossing and quick steep ending. It had it all! I think the pics make it self-evident. 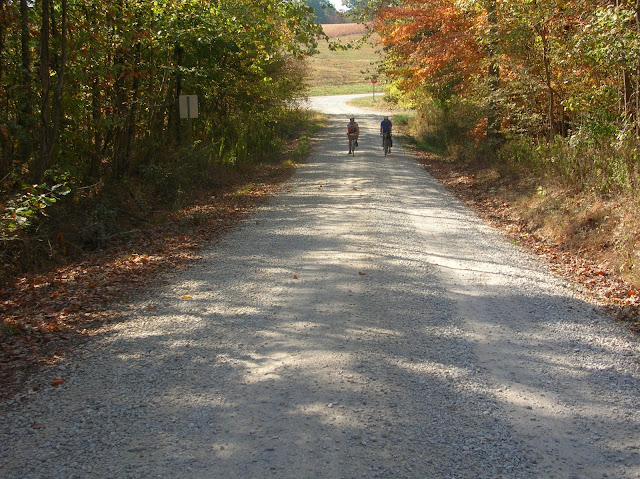 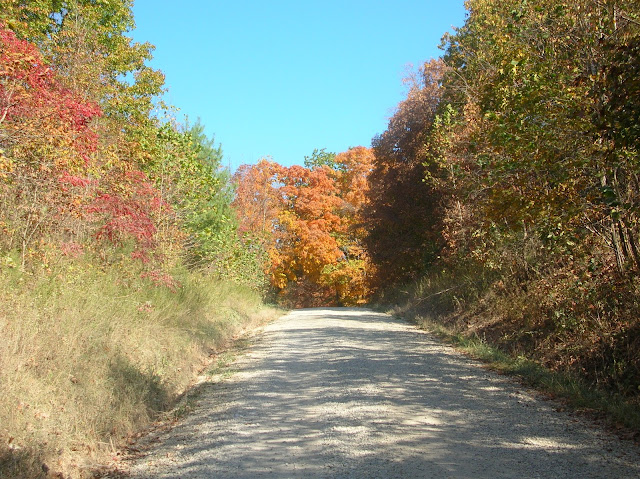 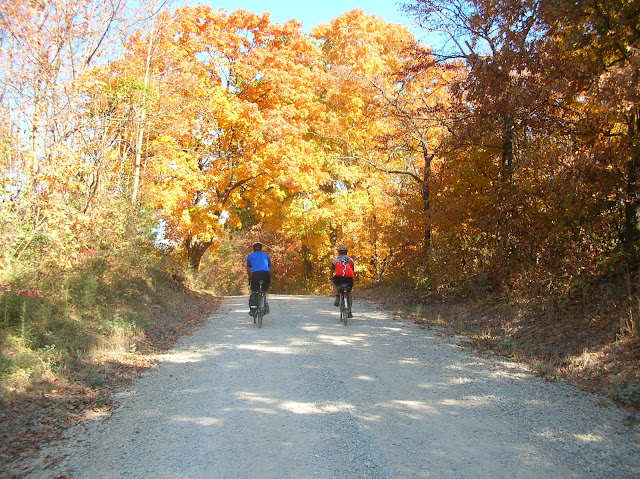 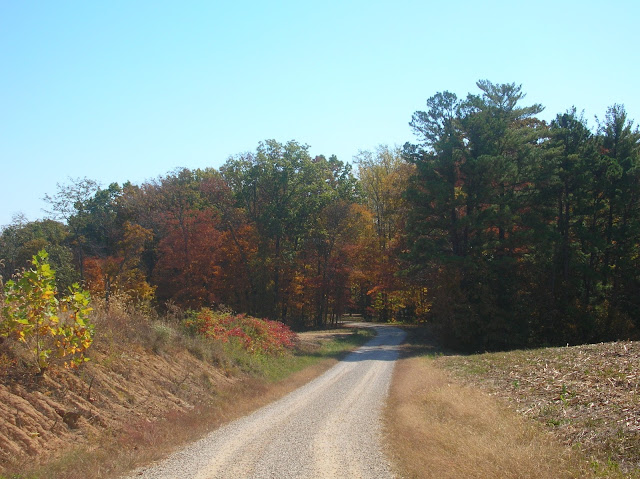 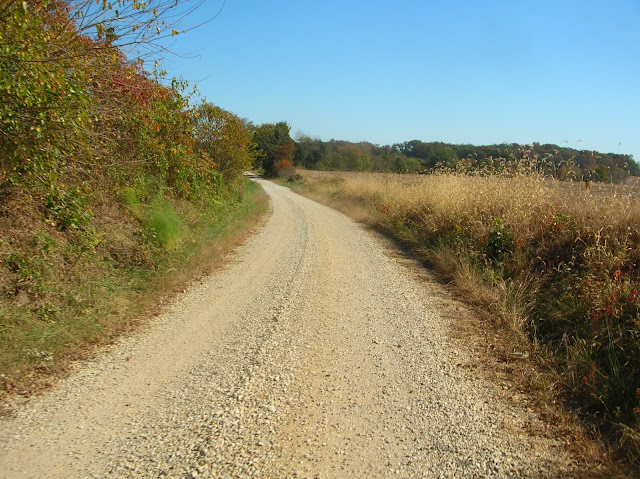 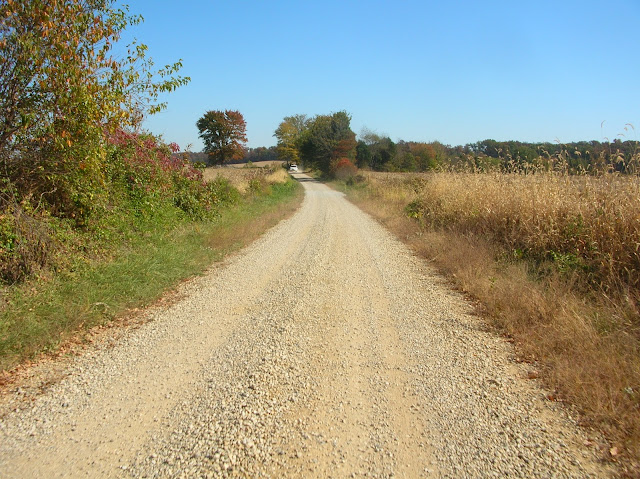 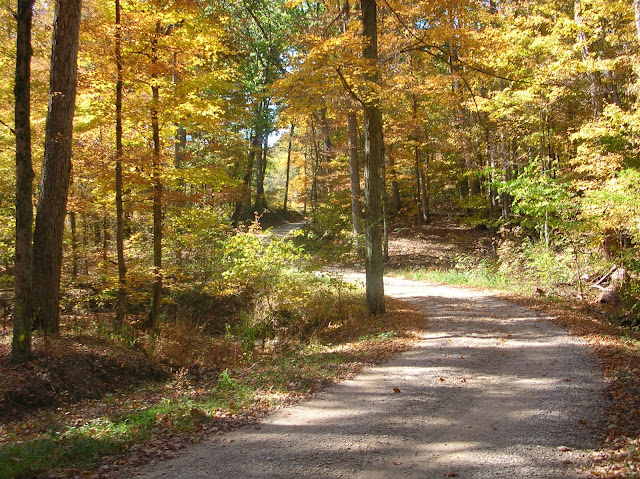 This pic is my fav and does exactly what I wanted it to, with the S Curve descending through the trees. Dave and I almost bit it on that descent in heavy gravel, but it was worth it.
At this point we began to work northward on 950E, which was a really strange. It began as a beautiful bucolic run (as seen in the 2nd pic below). To the right and left we saw small lakes, which either are natural or perhaps man-made from strip mines as I subsequently saw.  Later, the road developed these strange hard-pack ridges that seemed at odds with the gravel surface. Later it turned to pavement, but again turned to gravel north of Old64. This portion was one of the best of the day, although I don't have many pics of it. 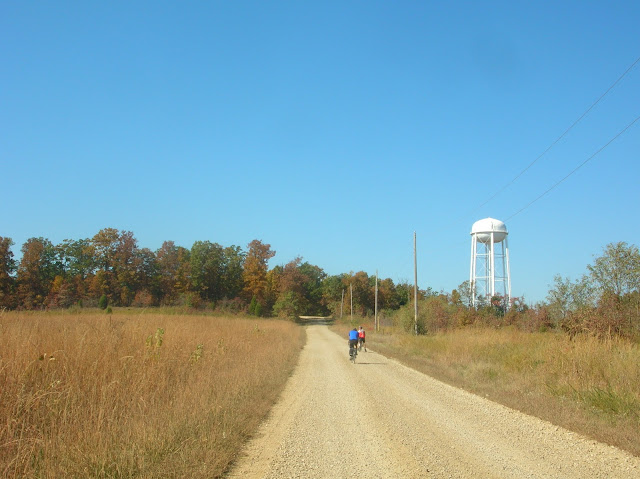 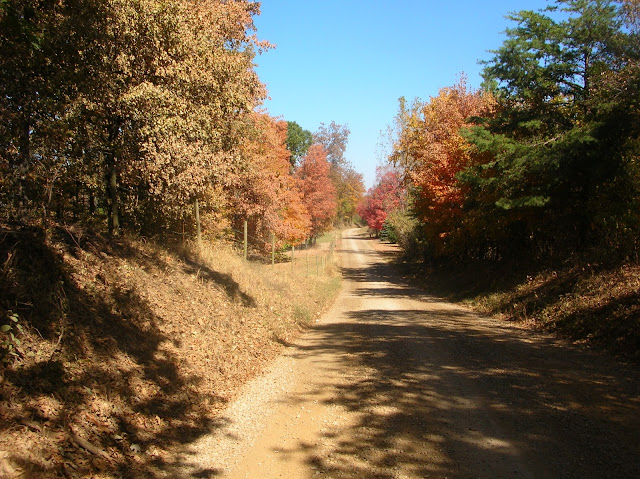 After a few miserable paved rollers, we turned right (east) on 450S towards Huntingburg. This stretch featured roller after gravel roller, although many left us the chance of carrying speed down to make the upslope. I personally enjoyed this immensely and still felt good legs at this point. The pics give a feel of the movement up-n-down. We then turned briefly north and again right on 400S, another gravel section, but this time quite flat, putting first by a nice lake. We missed the heron in the distance, though. 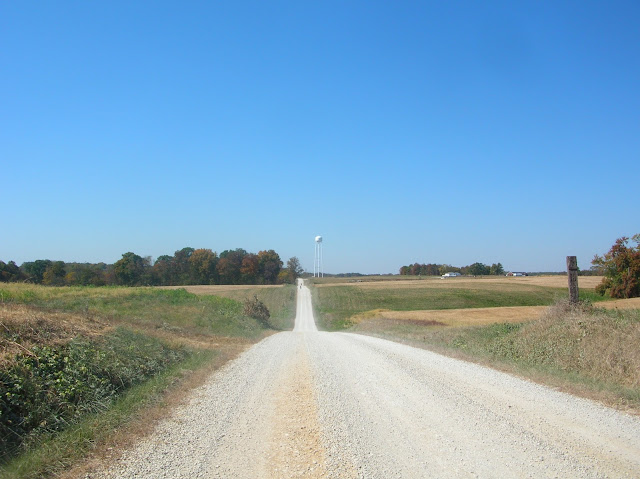 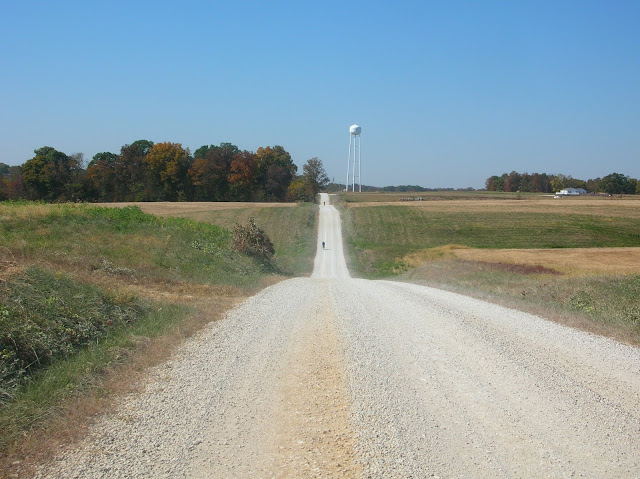 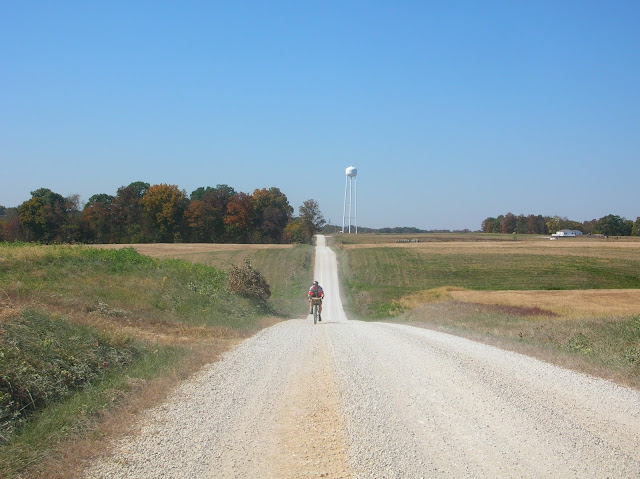 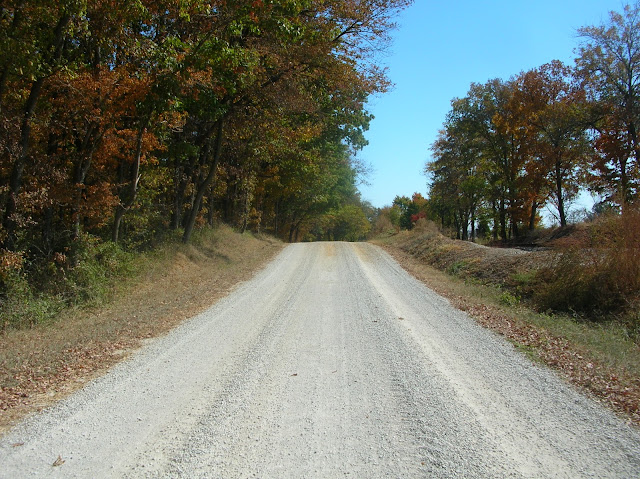 Entering 400S with the rail line on the right and a forest grove on the left. Very nice. 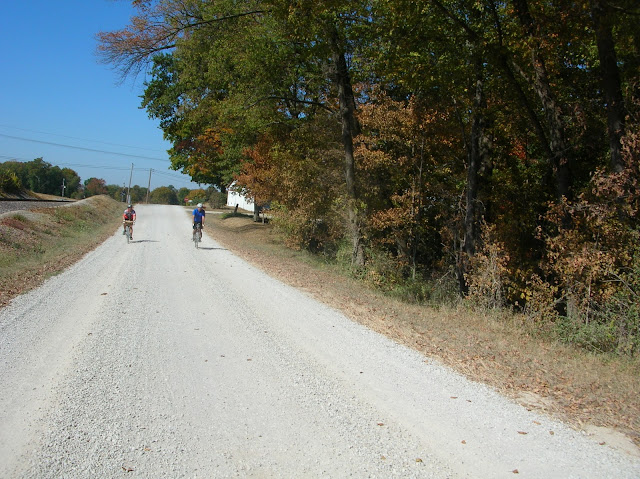 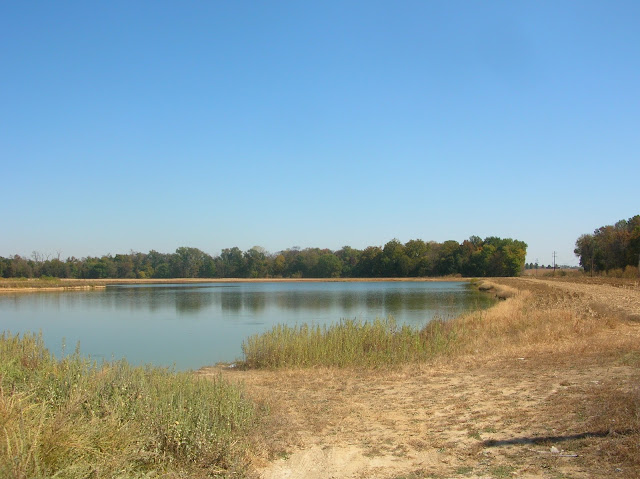 At this juncture I think we became aware of the sun beating down off the white gravel. The temps were approaching 90 and we were ready for a stop. Why did we have to deal with the heat like this in October? We turned left at the "Road with no Name" and found a lake nestled under the train tracks at the crossing. Seeing this earlier made me think of the midwestern plains vistas of Dirty Kanza with the wide open spaces. I won't speak for the others, but the combination of the lake, tracks, sky, road contours, and surface made the "RwnN" was on the highlights on the day. 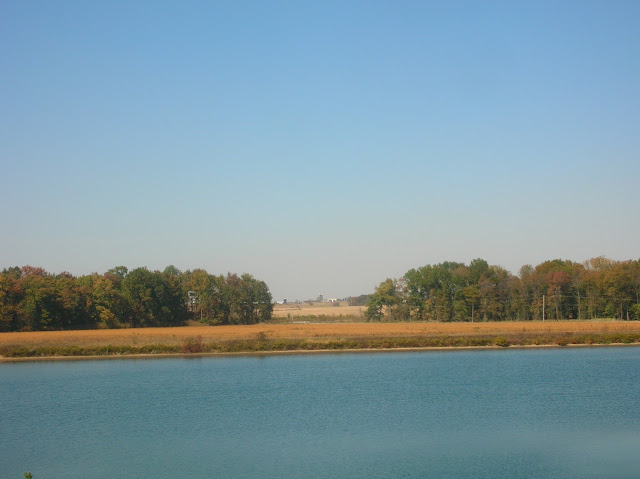 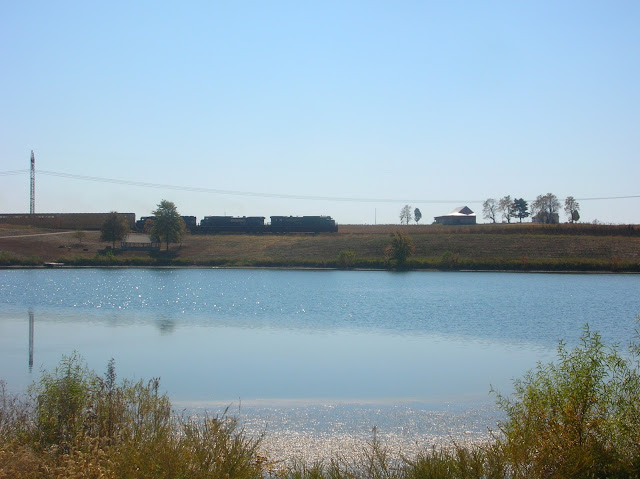 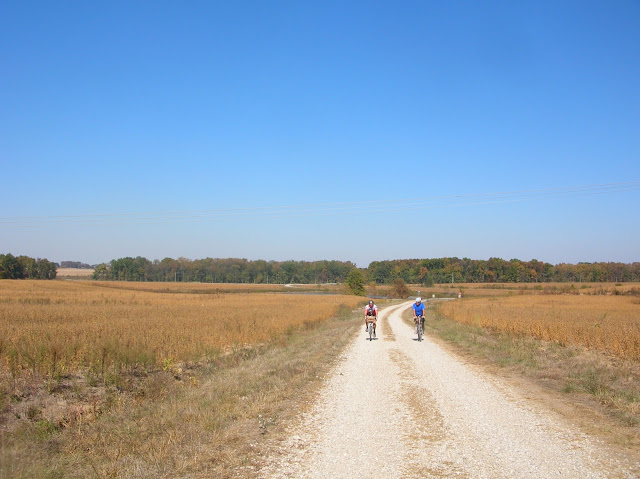 With a brief stint 500S/12th St. we entered Huntingburg for lunch, with Wendy's winning the vote. The sugar, fluids and carbs all helped us gear up for the 2nd half of the day. I wish I could've taken of the pic of the little Mennonite girl eyeing the strangely dressed Michael in his biker garb, all the while she looked as outlandish in her oh-so-prim Mennonite solid pink dress.
at October 12, 2010

Really great post ... your writeup is excellent, and it's very cool to see your photos, and how at times we took nearly the same shots and sometimes quite different. Looking forward to the rest!