After our Huntinburg lunch we headed east towards Birdseye, knowing that we had a middle stop in St.Anthony for water and supplies as needed. The stretch from H to B revealed less information on google streetview, so I didn't know how much gravel we would encounter. I was pleasantly surprised to find several sections. At the same time, the mounting heat and roller climbing was getting to me. I felt quite good into Huntinburg, but perhaps I had been too ambitious. As some point on a gravel climb I just sort of "popped", perhaps at the 45mark. From that point Dave and Michael were stronger than I was and I had trouble find a good gear. It's the first time of late that I've ridden this kind of climbing on the BR. I'm used to mtbike gears on my other bikes and I was missing that granny bail gear on these rollers.

We did find a nice, short section of dirt 245E along some cypress, much like you would find in a European allee. 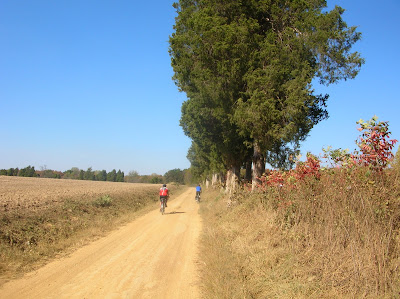 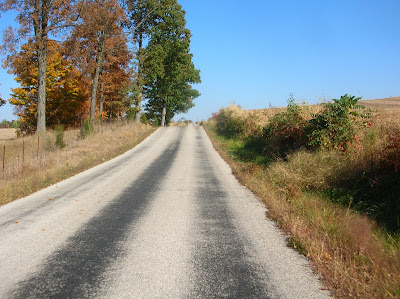 I'm not sure if this pic quite does so, but there are 3 rollers in this one pic, interminable. 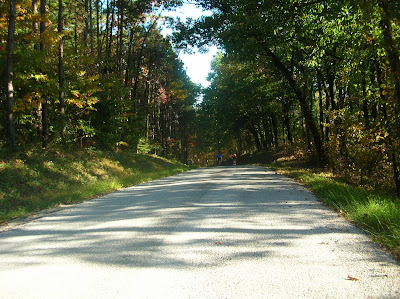 Once we climbed the steep pitch out of St. Anthony's, that put us towards Birdseye. We suffered through both gravel and paved rollers, and I for one was bushed. At this point I suggested (coerced) that we take a smart cut-through and shorten our ride at the expense of mileage and more heat and more rollers. My right calf even started to cramp a bit late. Our cut through cut off the Birdseye stop, but still took us close to Ferdinand State Forest and some of the rustic roads in that area.  Amazingly, I don't have a pic of Ferdinand Forest Rd., which is basically graded portion of a field where someone dug a new phone line. 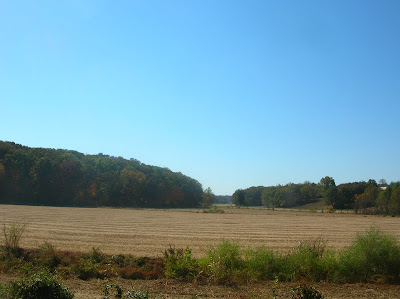 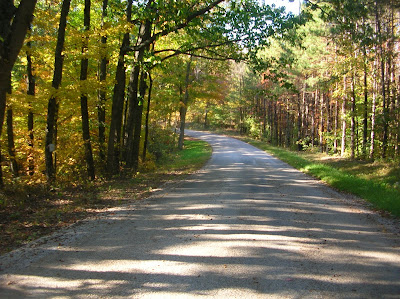 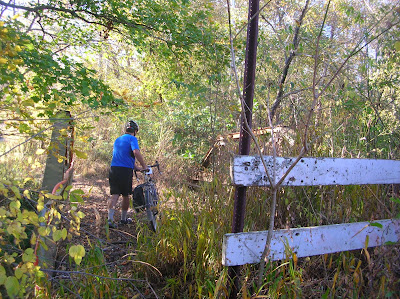 Dave on the bridge of Ferdinand Forest Rd.
One can tell from the lack of pictures late that I was bushed and intent only on finishing. The legs felt like crap and I had trouble climbing with a necessary gear. Still, the roads around FSP were delightful and worth a return trip.  Michael and I discussed the reality that as you get later in a ride, you take fewer pics, and that reality held for me. Apertome did a more consistent job than I documented the latter stages of my own misery (and his quality is better).
While very challenging in the last 15m or so, it was a spectacular day in so many ways, the company, the texture, the leaves, the open space and the challenge. I have to mention that I didn't speak much of Dave here if only because I think he had the opposite day that I had. Early on he struggled, but as the day lengthened, he seemed much stronger and comfortable with his legs (although not other body parts). I pooped out. and Michael was a very strong riding partner.
Very challenging day. Very satisfying day.
at October 12, 2010

Well then. I just posted how I was looking forward to the rest, and here it is!

Nicely done again. The shot looking back at the dirt/cypress "road" is great. I missed that angle altogether.

Really, I was impressed with how well both you and David rode. Knowing that I've put in a lot more miles than you guys have, recently, it was a tough ride for me, but it must've been harder for you. But you stuck with it and saw it through to the end. Well done.

I'm glad I got to ride with both of you. It was a good combination of pushing when necessary and relaxing the pace when necessary. It's crazy to think we've just scratched the surface of what is available in that area ...

Nice job pulling that ride together! It looks like a fantastic route, and a good long day with friends. You are welcome to come out here to north Texas and find epic routes for us anytime.

Pondero, love to do so sometime. I'm willing to drive a ridiculous distance for the opportunity.