My night's sleep proved uneventful and a juficious use of the iPod drowned out the bad camp guitar down the way. Skies looked a little heavy and before we exited camp some light rain started. Our first goal was to check out a somewhat new establishment in the area, RedRiverRockHouse, which could provide us a more inspirational breakfast that freeze-dried eggs. We both had hearty breakfast burritos, mine which I couldn't even finish. The staff there was very friendly and the vibe quite nice. If in the area, check it out.

After a lengthy breakfast/coffee/wi-fi/charger stop, we headed out for the day until grey skies, but no rain. Out the door we faced a steady 3-mile acclivity and then a solid 1mile climb at around 3-6%. After yesterday's blowout it was easy, although the lack of shoulder made traffic interesting along 11. Shortly thereafter we found our highlight of the day, maybe of the weekend, on Fixer Rd. 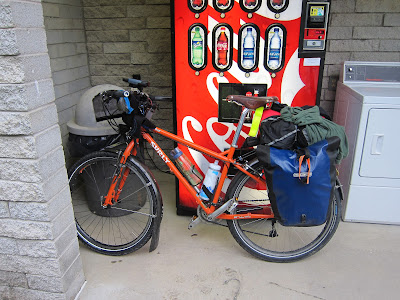 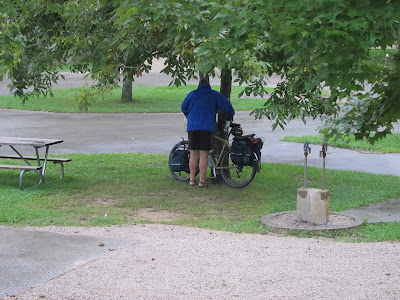 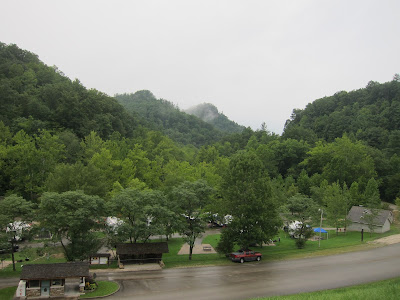 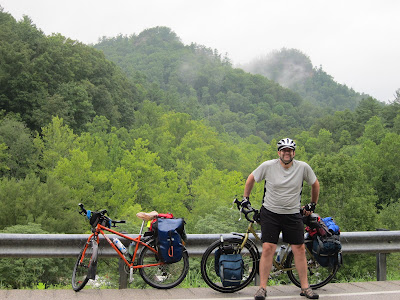 The trip's purpose was to do mixed-terrain touring and Fixer gave us everything we were looking for. Mainly it looked like service road for the oil wells which dotted the landscape. For the first two miles we didn't see a dwelling of any type. At mile two we came across a damned lake with a strange ghost-town below. More oil? Who knows? The run continued south and the terrain changed from sandy, oil-well scrub to what you would usually find in a Nat'l Forest. 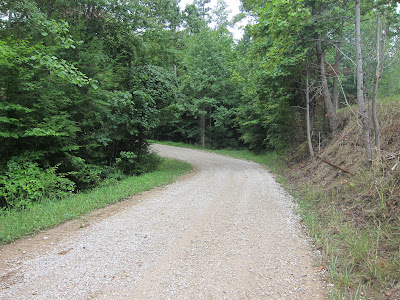 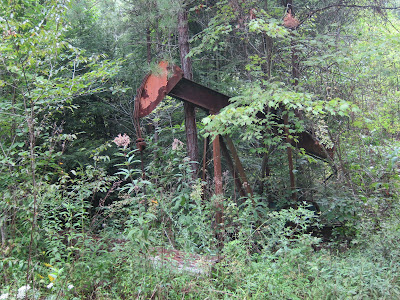 Below Fixer the road ran directly next to Sinking Creek, providing us some great mountain scenery. As the pics indicate the road used the creek bed several times, making for some fun creek runs. We took one very small wrong turn but quickly righted ourselves with the gps. At some point the roads ceased being Fixer and turned into Bald Rock Rd., but I sure as heck didn't see the transition. At some point, though, the road transitioned from forest and creek run to a more proto-industrial setting with chunky gravel and an open quality, a little sunny and a little bumpy. 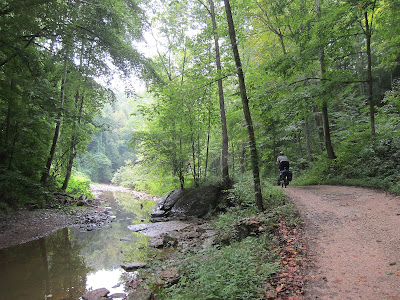 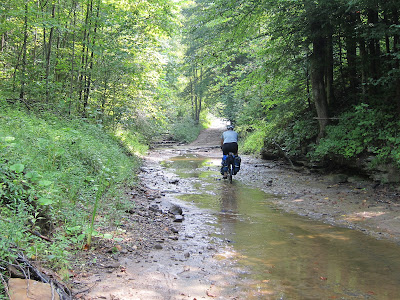 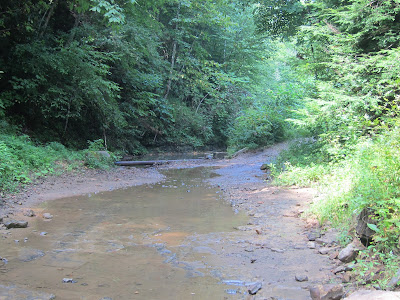 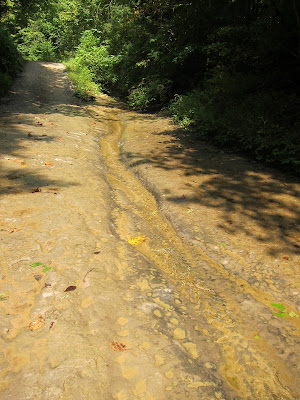 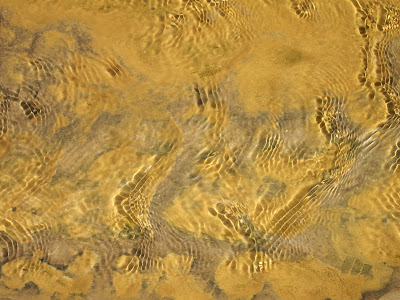 We came upon this sign in the chunky, sunny area and later three random youths walking down the road. Later research showed that the Pendergrass-Murray Preserve is owned by the Red River Gorge Climbers' Coalition. Apparently we were surrounded by literal world-class rock climbing on all sides and didn't even know it. Shortly thereafter we ran across two white vans full of what looked to be 13yr-old climbers looking to visit Purgatory and Motherlode. At around this town our trip took a fateful turn. Somewhere in the bounty that was Fixer/Balk Rock Patrick broke a rear spoke. Impressively his wheel was holding true very nicely, but a compromised rear wheel in this kind of terrain would be trouble. We walked the 1/2mile 15%+ climb to get out of the Bald Rock area and assessed that a) Patrick was able to roll and b) he could do a mechanical in Beatyville, our next stop. 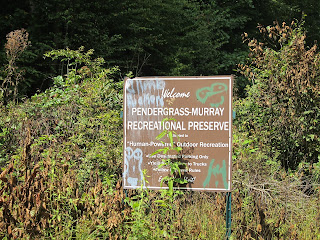 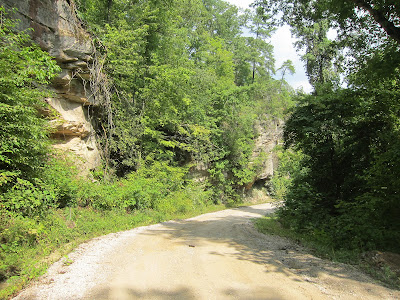 We took a quick tour of Beatyville and decided on Manna Cafe on Main, which isn't even on google results (research shows that they just opened on July 24th).  Honestly it looked a little cleaner than the other local country cookin' joint down the street. We had a very nice stop there, between the two of us eating two salads, soups, egg-salad sandwiches and pie for $10.55. I still can't get over that number. After lunch we found a nice spot at the courthouse on some benches in the shade to work on Patrick's wheel. Things got more interesting when he realized that it was drive-side but that he didn't have a cassette tool, so no spoke change. Suffice to say those next minutes or hours sort of rolled by. I fell asleep at some point. He called various places, considered various options and certainly lost a couple day's sleep trying to figure out what to do. I don't want to re-hash them all there.

We were going to camp somewhere in Beatyville when his phone search found LagoLinda- duh!- which I had considered on initial route planning. Away we went up a doable 1+mile climb out of Beatyville. If the Fixer stretch was sublime, the 9mile stretch up 52 to LagoLinda was just annoying. 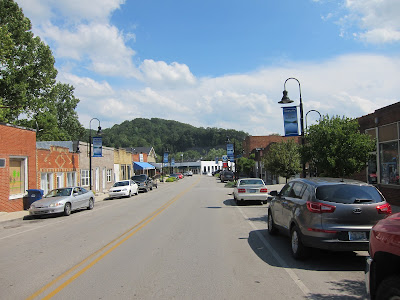 The route out of Beatyville was rough but Lago Linda certainly cured some wounds. It is a delightful campground up atop the hills surrounded by forest. Apparently well-known in the climbing set, we were there for a limited time so didn't take advantage of the lake, cafe, broadband, hiking or even the hot showers. We just set up our camp, ate some freeze-dried food and planned out the remainder of our trip. As night fell numerous campers were arriving as part of a large climbers' trail days session to take place the next day. Patrick and I walked over into the field across our tents and beheld what was for me the highlight of the tour.

Over our heads was a black, clear sky with every imaginable star out blazing. No light pollution. No haze. No pollution. No humidity. Perfect black, and rising above us the Milky Way. I tried to show Pat a few of the lesser constellations I learned back in the day when he cried, "I saw a shooting star!". Wow! How fortuitous. Then another. Then another. Unbeknownst to us, we had arrived atop the mountain at Lago Linda during the annual Perseid Meteor shower, coming right through the middle of the Milky Way. It was a truly magical moment, and one I won't forget anytime soon. Yeah bike touring!! 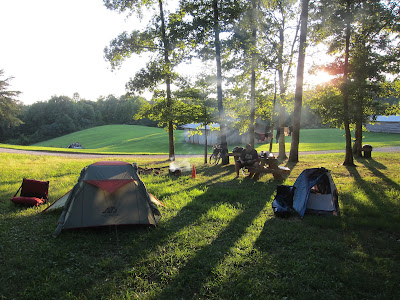 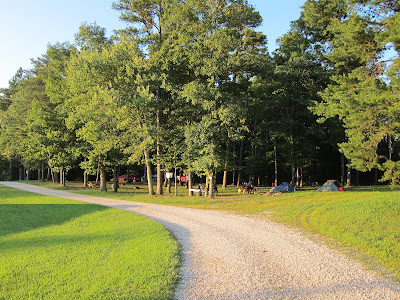 Awesome writeup! I love the shots of the creek-road segments.

I thought of you guys on Saturday and wondered if you were catching the Perseids out there in real-dark land. Glad to know you were!

I've seen the Milky Way once, but never during a meteor shower. I really wish I could have made this trip.
The scenery is incredible.

Truly stunning. It was obviously brutally difficult, but the scenery was wonderful. Sucks about Patrick's wheel ... a real downer. I can definitely see how the meteors and the milky way would be a highlight!

That makes me want to close this laptop and go outside.