Big Sinking Creek and the trail that wasn't

Our plan had been hatched some weeks ago, a 3-day extravaganza of mixed-terrain madness deep in the DBNF, an area Patrick and I had toured the previous two years. Based on our experiences, instead of loading in the bikes, we would base ourselves at LagoLinda and do day rides from there, giving us the ability to car camp- Much Easier- and to explore a bit more while minimizing distances.

Patrick and I had originally hatched the car-based plot, and Timothy and Dave jumped in. Due to that annoyance that is Life, Patrick bowed out and Dave was teetering just days prior, as his neck had flared up. Ultimately I goaded him into coming and we made our way Friday morning for the first day Ride-camp-Ride-camp-Ride was to be the plan, with the longest day on the middle Saturday.

Our plans were further affected after hearing that our weekend was to be a RRGCC work weekend again. It had moved from the August date Patrick and I encountered the previous two years to our very same. They were following us! Point is, instead of riding first and ambling to the campsite we went directly there to reserve a spot before the climbers descended. Once set up, we did our shorter ride first, directly from camp, which would leave us plenty of meal time.

The short day ride was a casual 25 miles with a little mt.bike loop thrown in in the middle and as mystery connection up to road 1036 through a disputed corridor of the Sheltowee Trace trail. Disputed corridors always make for good cycling.

**I would like to point out here that I did not take my camera nor my phone on D1, so all pics are borrowed from my compatriots.

We encountered New Virginia Rd. and it's fun, gravelly, sandstone strewn path until it careened down a ridiculous descent with lots of mid-10%. The brake pads were already on notice. At the bottom began a fun adventure facilitated by a loop I found on rwgps posted by Chris. He's got a couple fun blogs, but this was from the exact area we needed to explore, essentially a series of random oil company service roads deep in the KY wilderness. Although this is a nicy, tidy finite loop, it seemed that every half mile there was yet another road or path going off in a new direction. More, more, more. One take-a-away from this experience was the near limitless amount of exploration to be done.

Aside the cobwebs, this was an awfully entertaining loop. 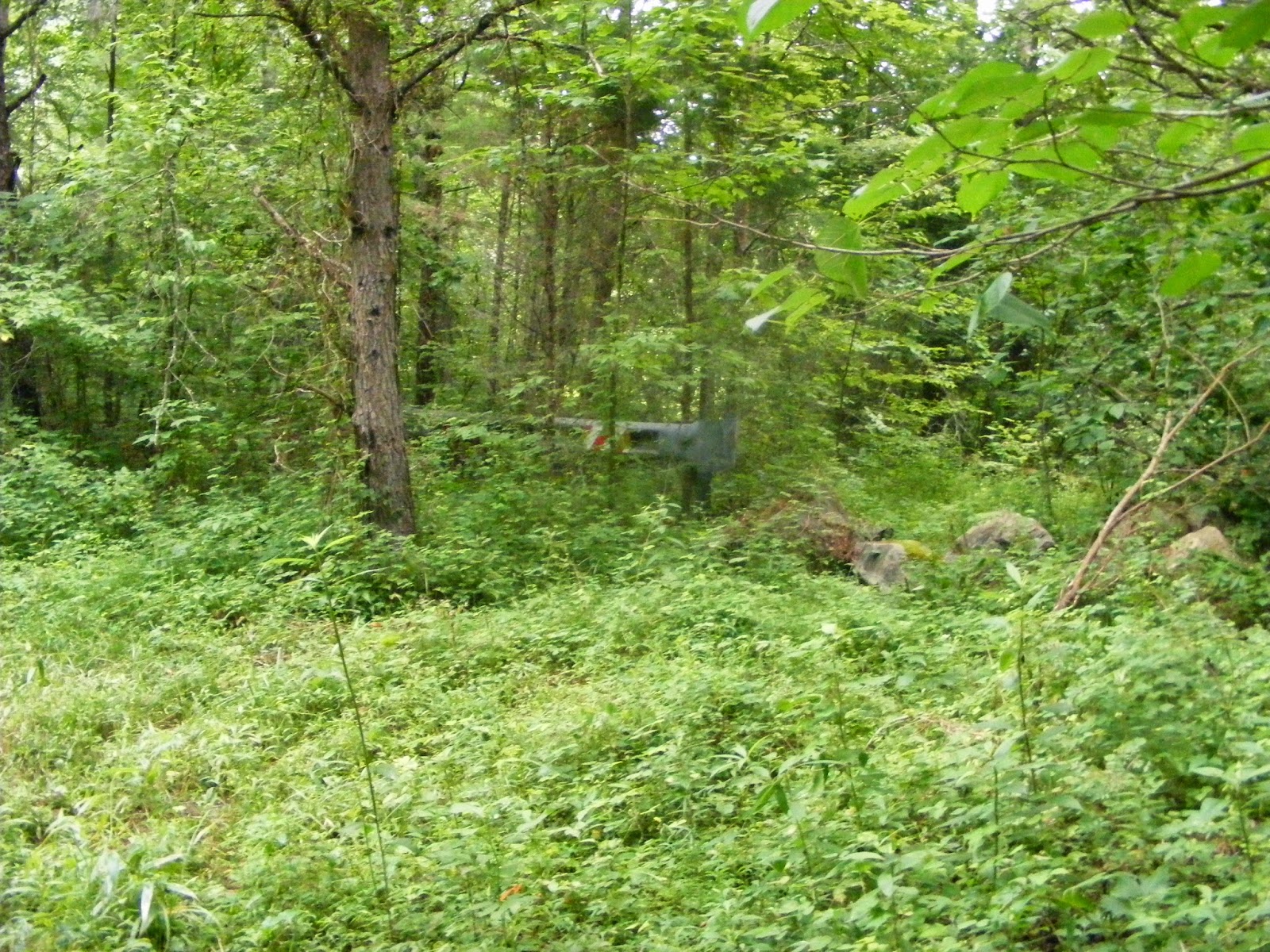 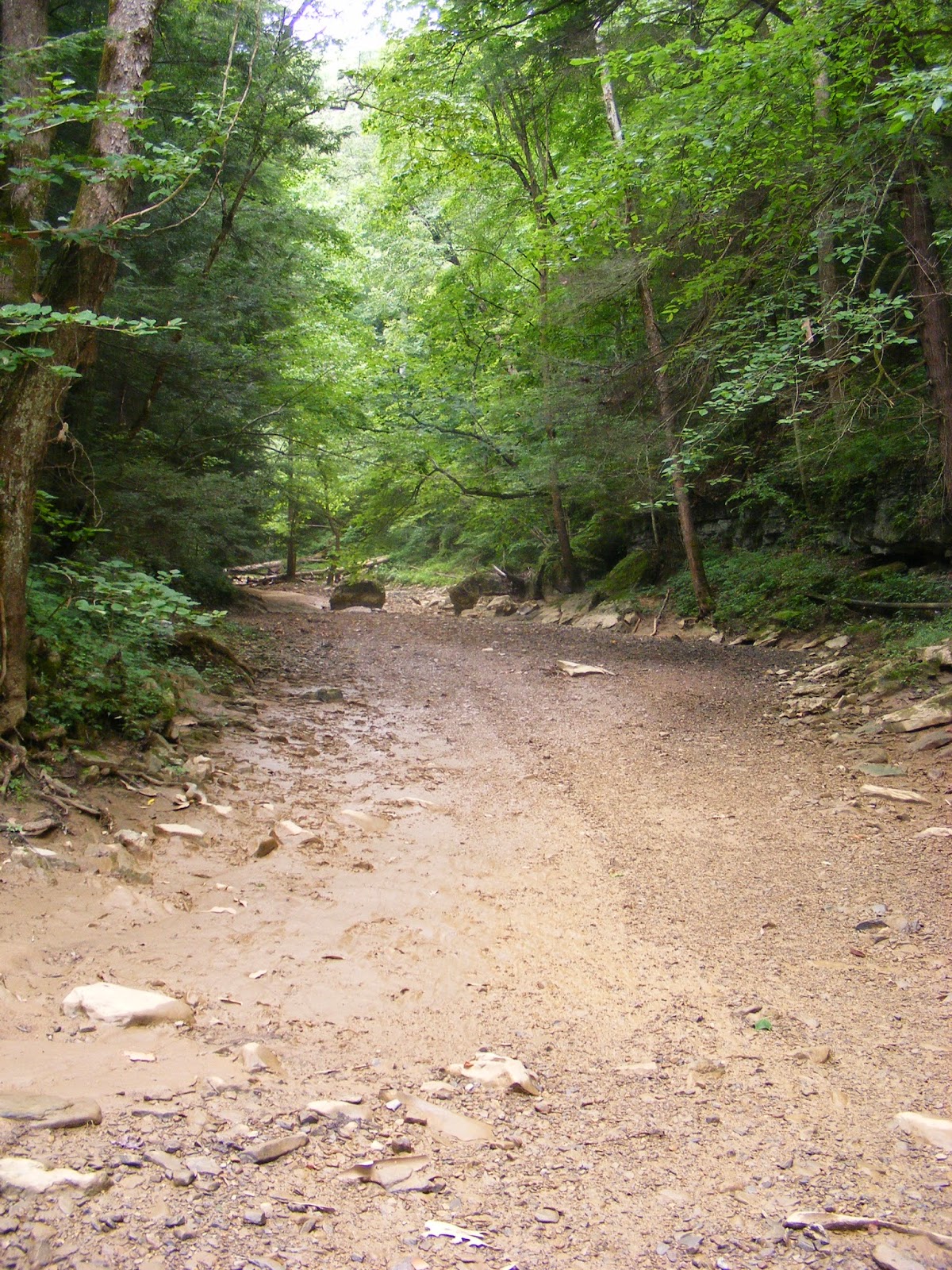 This is the road. Yes. I'll explain "big sinking creek" in a moment, but this suffices as the roadbed. Glad it didn't rain too much.

KY rockhouse. This is where we lunched/picnicked, overlooking such beauty. Great moment. 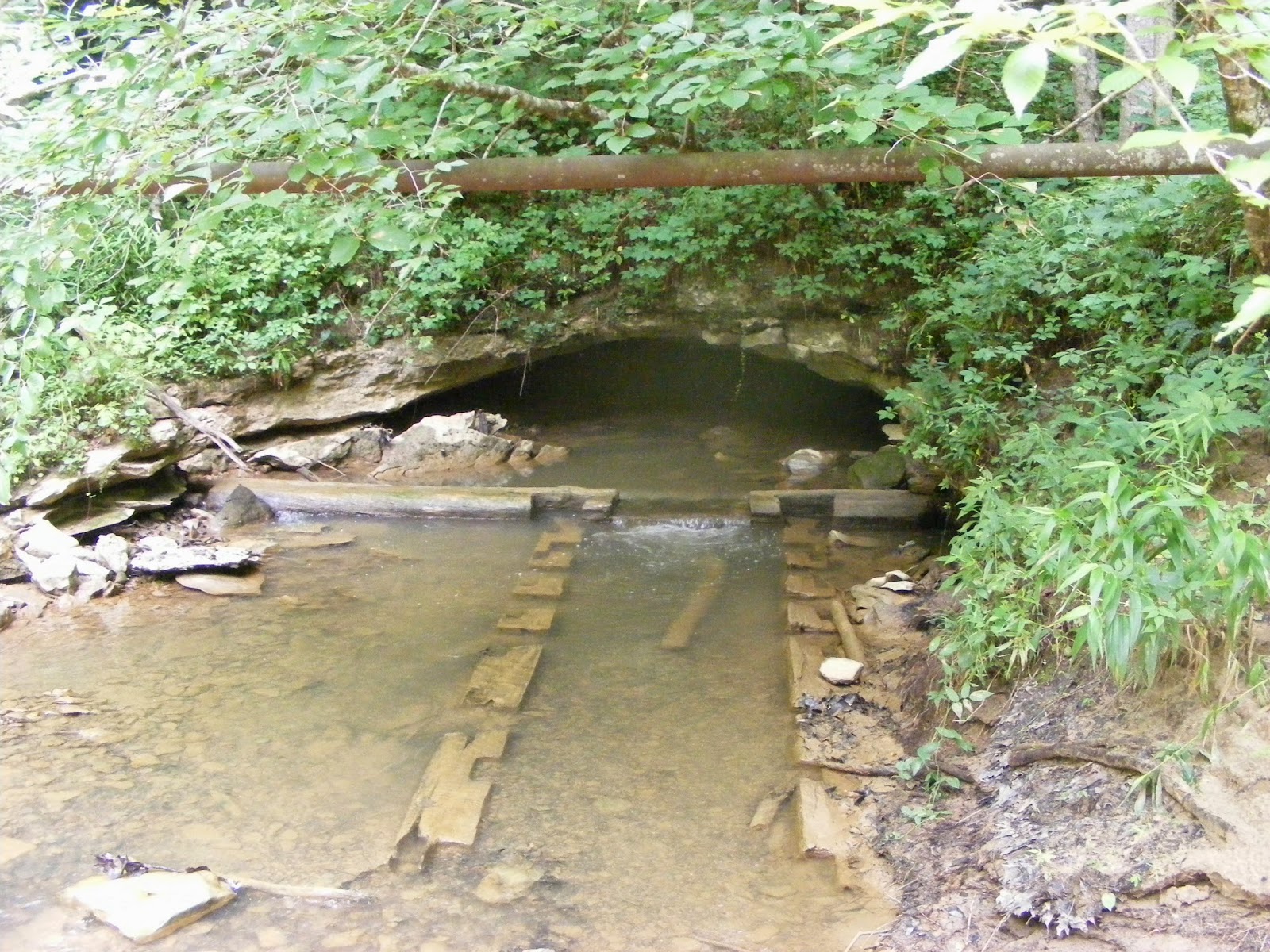 This is your answer for the "sinking" mystery. It's called sinking creek because, in fact, the water mostly flows under the streambead and occasionally pokes its head out. We're still mystified at this man-made construction at the mouth of it, but our route basically took us *above* the creek. Except in heavy rain, I assume. then it would have been interesting.

At the end of our BSC loop things got a bit more interesting. We headed uphill walking across a line of heavy rock until I noticed that our track was going off track; we were on the lowest stretches of New Virginia Rd. We turned and gingerly descended the rock garden to find ourselves in yet another creek bend with an even larger rockhouse. Stranger still were the remnants of a bridge which had fallen into disuse who knows how many years previous. It was all sort of mysterious, soothing, peculiar, and adventurous. We *were* on a portion of the Sheltowee Trace at this point, so Timothy's gps had it as a trail. We were deep in the boondocks we had an old bridge and established recreation trail at our digital fingertips. 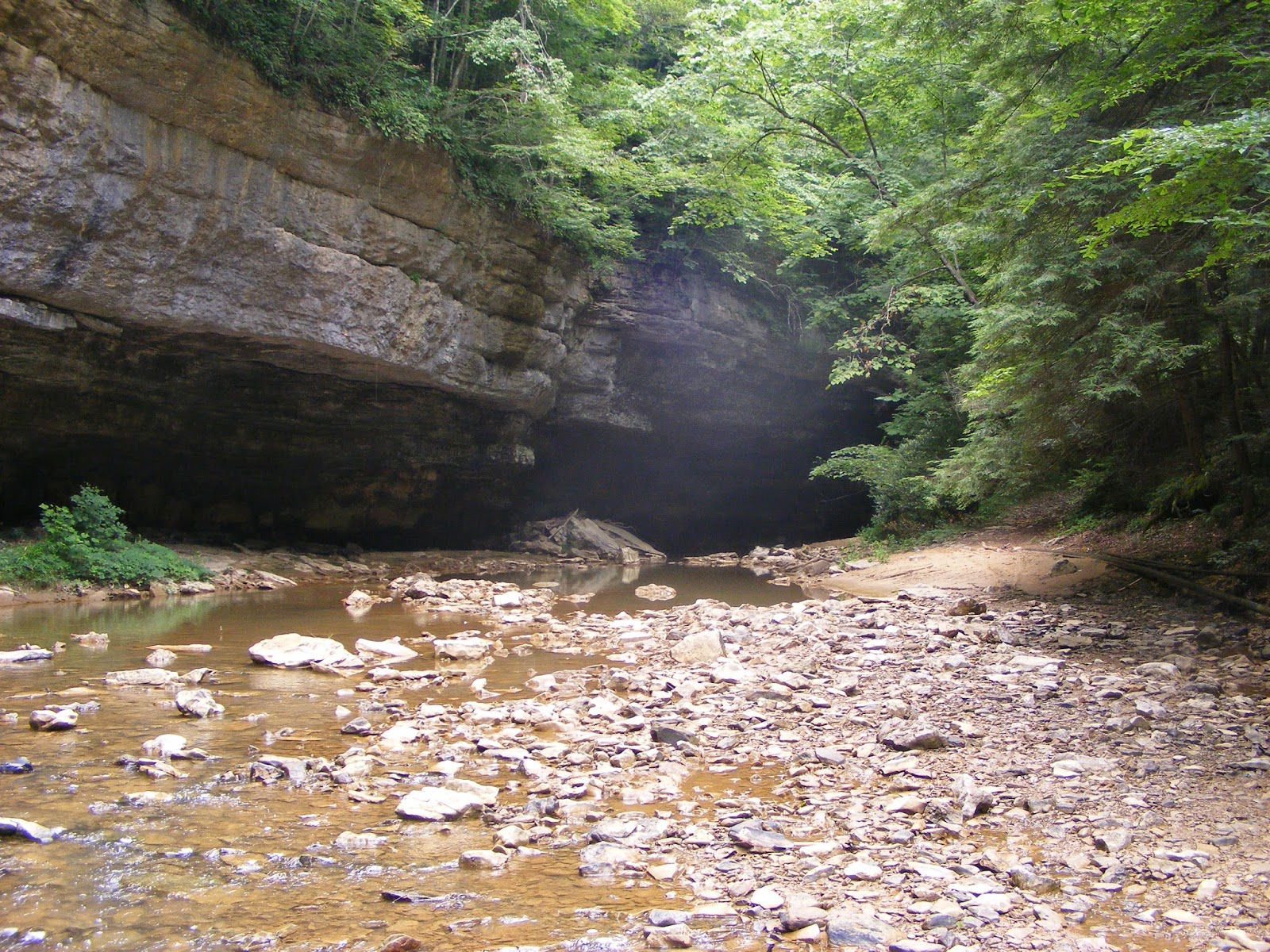 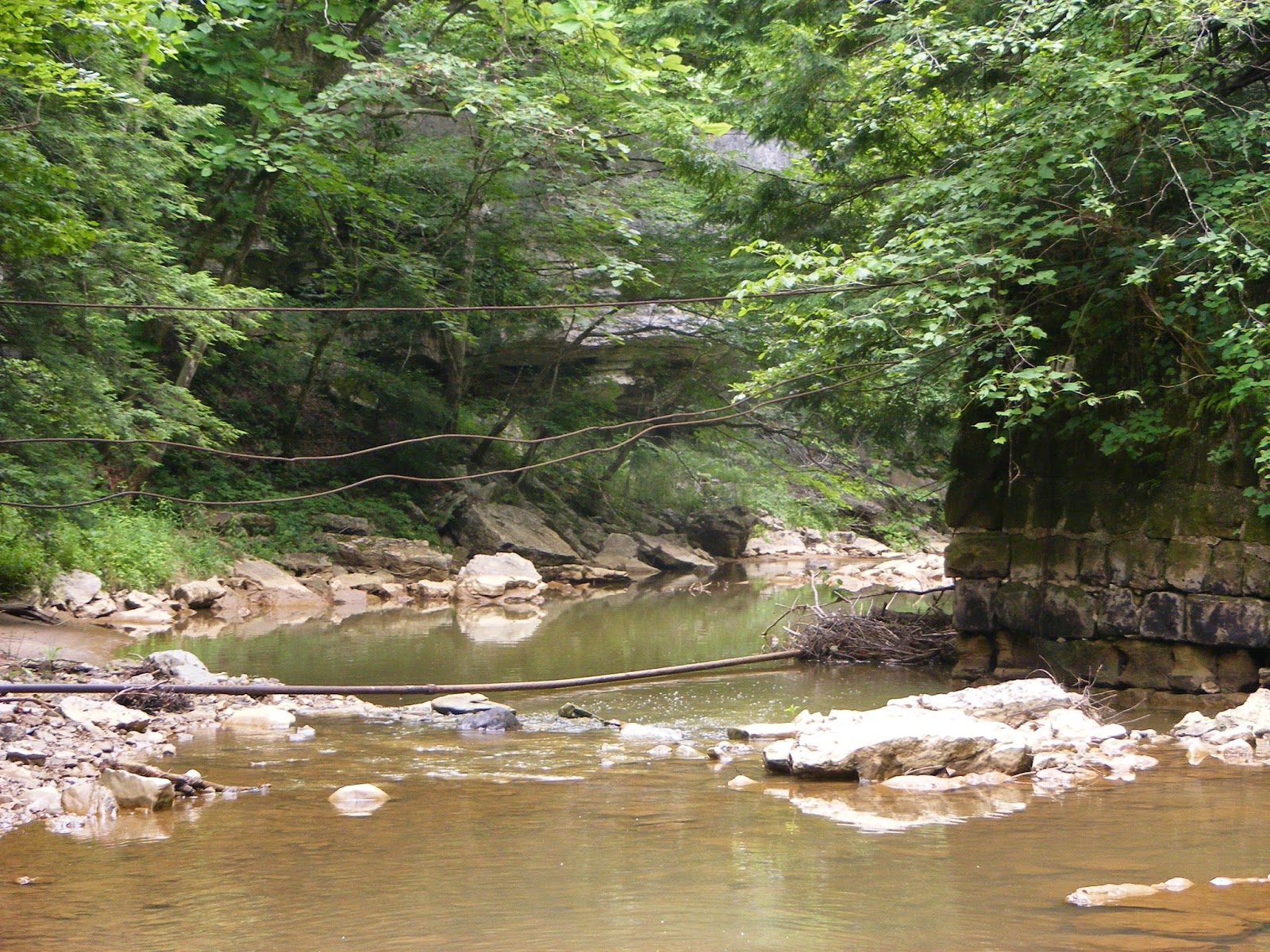 We followed the "road"  to find another rock garden and portage. At some point, yet again, the track was leaving our track, so we descended and followed the secondary path, the one along Timothy's trail. What we found was a stream bed, not a faux sinking, rideable stream bed, but a really chunky, ornery stream bed that hard sort of challenging to walk on, much less portaging bikes. With no beter options we hiked the bikes up the stream bed waiting for our escape. It was a walk, a long wait. 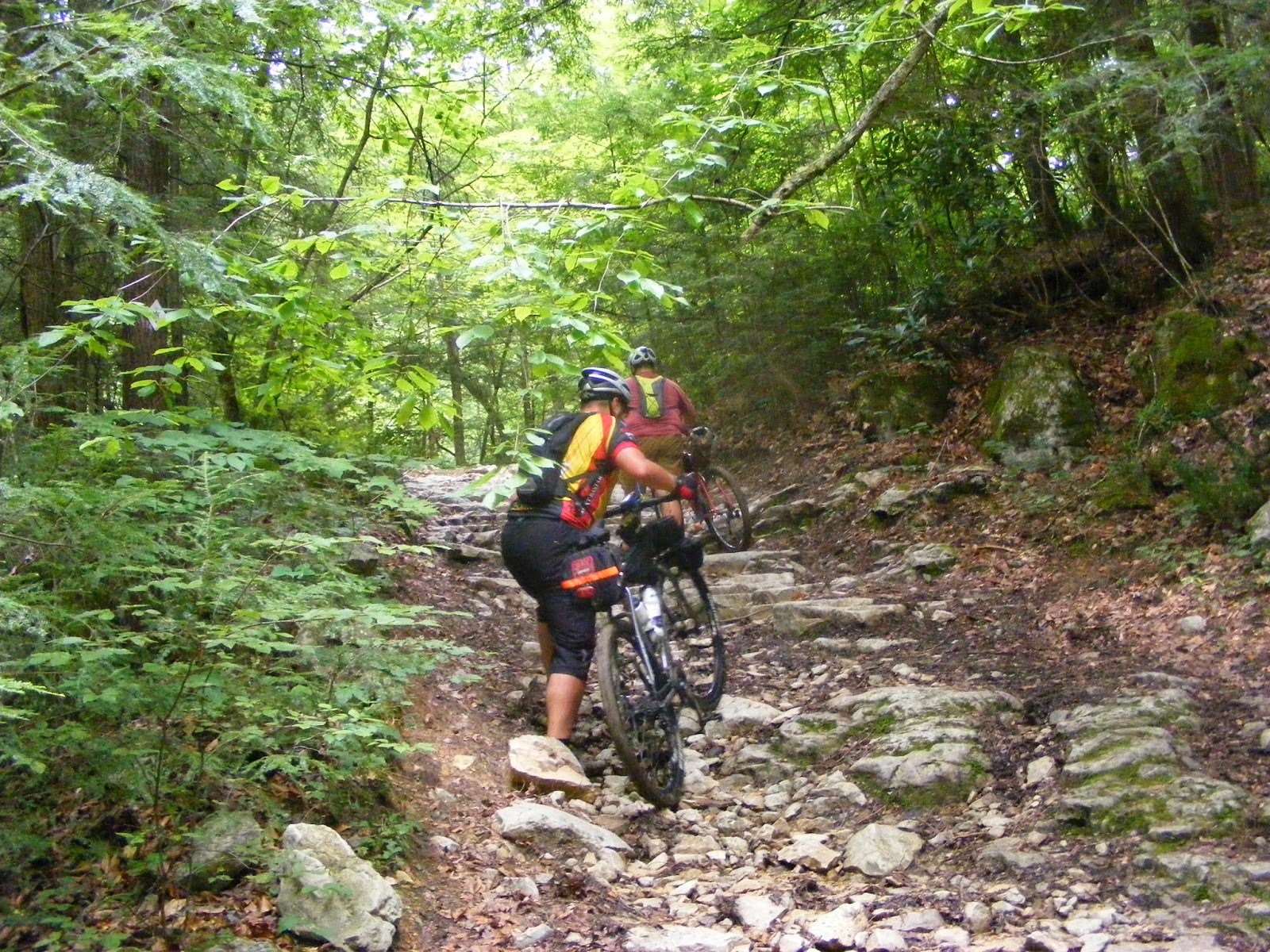 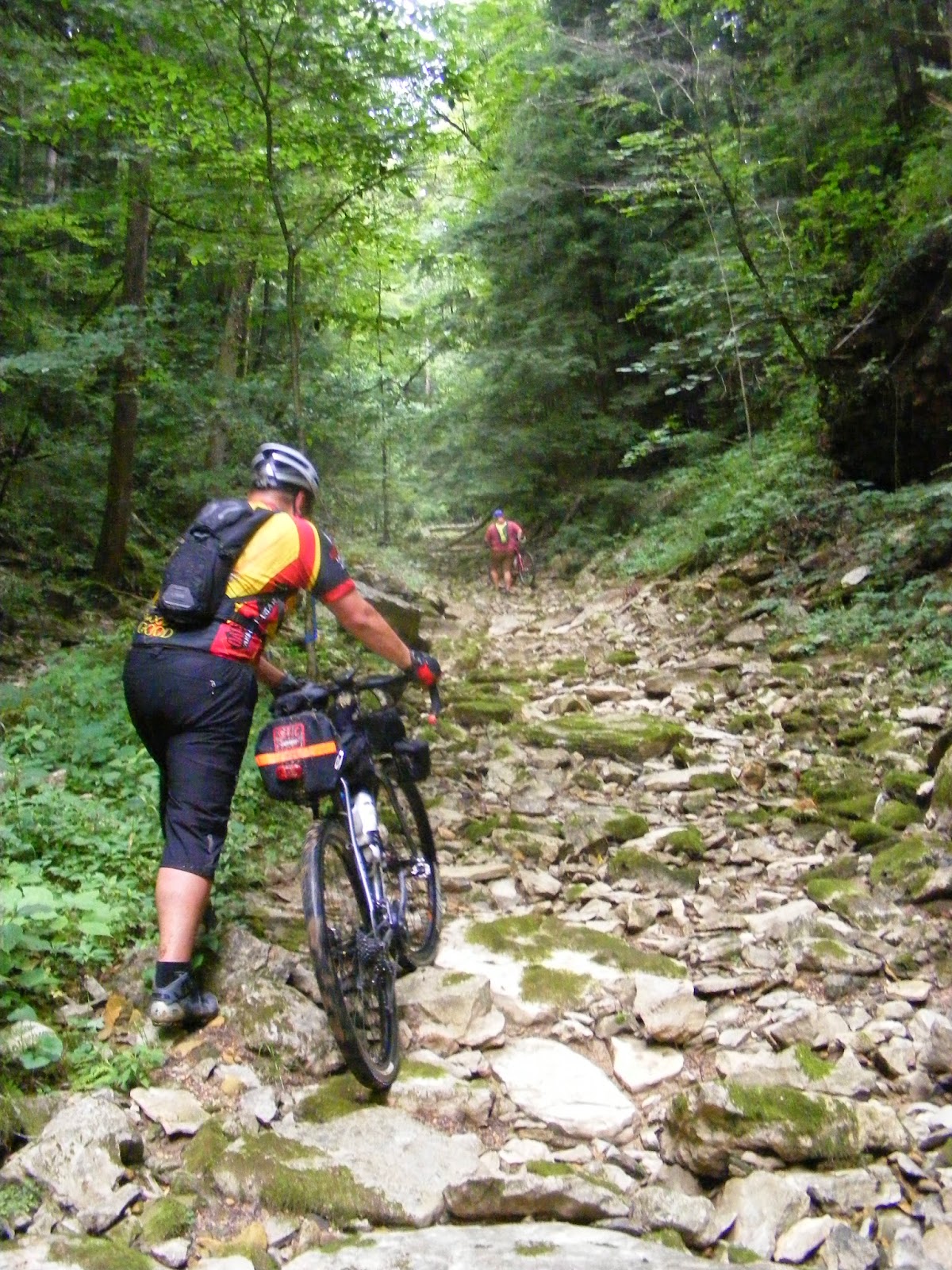 A mile or more of this and we call it adventure.

I was in the lead and sang "Hallelujah!" when I saw the remnants of a green thing off to the right, the remains of a trail/road, which meant the departure from our rocky Hell. My thin-soled shoes had my feet sore, Timothy had fallen on a wrist and knee, and Dave's gimpy shoulders were bound to give way eventually. It was time. We inched up the road, passed some oil pump workers who seemed quite bemused at our sight and eventually found the intersection of 1036, a nice gravel run which Patrick and I had previously trod the previous summer. At this point pictures become rare. Why, you ask? Rain, I answer. We rode the steady grades up 1036 until we hit pavement again, and with a general concern of a lack of brake pads, hurtled down the Cathedral Domain descent. We were facing a steady, light rain, one that became a bit more intense as we turned onto Old Landing Rd. This stretch provided up challenging uphills- no behemoths though- or for the first time, a bit of brisk, hypothermic-induced concern on the downhills. The 62F rains were having a chilling effect, but yet another quarter-mile climb did the trick of keeping us warm. We hit gravel again on our left turn onto Beech Timber, and I enjoyed that stretch immensely, even if tuckered from the day's adventure. Funnily, looking at the profile I don't really remember the 13% of Beech Timber exit climb; perhaps I walked. I don't know. We were quite close to camp and rode the last miles as easily as possible.

Once back, the idea of someone else preparing and serving us food was a delightful one, so we somewhat cleaned up and began our first camping night eating fresh burritos, fries, and beer at Red River Rockhouse, where we dawdled for a good while trying to outlast the rain.

It proved to be an interesting day. Very.