"A Rainbow in the Dark"

there is prob a small, select audience that can hear the appropriate synthesizer part that comes after this chorus, a classic by either Black Sabbath with Ronnie James Dio, or just RJD himself, but NOT the band DIO, circa 1982 or so. who knows if my facts are actually straight?

below is an attempt 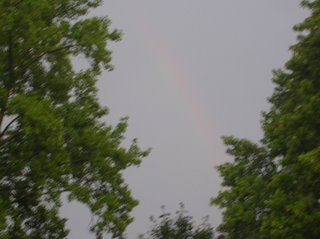 to take a picture of this

after a hazy day mostly recuperating from drinking a tad too much of the brewski last night after softball, i jumped forward for a wet and stormy ride this evening after supper. frankly it was pure cabin fever, but what better reason to go out in the rain. after reading and seeing lots of fixies yesterday, i decided to take the (pedestrian and mundane, but not to me) 925 out for a quick neighborhood spin. the inclement weather also gave me the opportunity to try out my new Serfas LED safety light.

I have a couple rechargables, but wanted something easy to install and quick to change from bike to bike, especially for latenight bar runs (i do SO many of those in my old age). short an simple, i cruised the barrio and got wet.

mid-way, though, things got much more interesting. to the Southeast i saw a very groovy rainbow that seemed pretty close to my position. didn't really think anything of it until i got closer to home and saw the other Southwest end of it, running in the general direction of the house. i also noticed that the eastern end of the arco iris headed in the direction of the park, so i knew i had chance to get a little closer. longstoryshort, i found the base of the rainbow over our local smallplane airport, Bowman field. the eastern end was quite bright, one of the brighter i've personally seen. 2nd bonus, i would say that including the western end, maybe 50% of the total rainbow was visible, leaving out the top 50%. and 3rd bonus was that, just north of the eastern end (sorry for all the cardinals) was another rainbow, a double, and just 1 miles from the house. Great stuff.

don't run into those opportunities often, ride, rain, fixie-ing, and finally, great double rainbows. good for me. the small pleasures