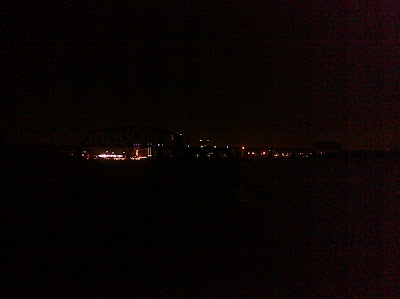 I'll have to say that I had an experience yesterday on the bike that I'd never had before. I'm not sure it was safe or smart, but it was alot of fun. I began the day with an earlier ride from Oxmoor Toyota, where the Tundra sits waiting to be "fixed" whilst at home I'm bent over waiting, well,... I had the truck in the local shop for some stuff and an engine light, but their efforts on the transmission warning came to no avail (long story and I don't want to start Sunday as such). So to the dealer it went for another assessment, and from there I rode home via St. Matthews on the QB.
'L's soccer tourney had been rained out, but the team had a pizza&play at the indoor club, so away the family went to that, where we hung out for 2.5hrs. The boys played soccer, the adults chatted (a few folks played cornhole too) and eventually the pizza arrived. As the boys were eating, I decided to go out on the field and shoot a few goals against the now-tall 14 yr-old and had some fun for maybe 10 minutes until the fateful-but-oh-so-typical. Basically I twisted by ankle, yet again, and that hobbled me for the rest of the evening. My ankles are just bad, and of course I'm carrying too much weight on them, so it's such a typical response but so irritating! We'll see.
So, we got out of there at 7.30, instead of 7.00, and I had to call Dave b/c we were to meet and head to Jimmy's 40oz. Ride out of Iroquois and I was running late. We ended up leaving about 8, with me on a hobbled left foot, but one still rideable, or at least we would see. Dave and I had a pleasant ride through Audobon, down 4th St., and S.Pkwy to reach Iroquois, where the search commenced. No knowing where the soiree would be, we searched around the Ampitheater before heading to the top. En route, a couple high-school kids acted like they were going to jump out and attack Dave, but it was in jest. Stupidass teenagers! We got to the top and headed towards the north lookout and lo and behold!, Cyclists! I would put the number at around 25, maybe more, maybe fewer. Having arrived a bit before 9, it seems that the grill had been spent and the 40ozers mostly guzzled, but there were 3 left, so Dave and I split it, him drinking from his bike water bottle. Classy! Spoke with former student/newer bike activist Brent, Derek from OYLC, Chad from our RCCS outings, and the drunk host.
I'd say we chilled out for a solid 1.5hr in the steadily chilly night, finished our brew- and yes, cold Miller out of a paper bag can be pretty tasty- and headed out. The ride down Iroquois Hill was eventful, at least for me, when fixie boys commenced skidding/braking down the hill. It's a crazy thing to see somebody hopping around and skidding sideways in the dark at 15mph. We were held up for a while when somebody apparently went down and another broke a chain.
Once we were on the road, the group split pretty quickly, with 1 fixie boy off the front and a group of 4 consisting of Dave, me and 2 fixie boys. These Jimmy rides are unpredictable b/c you don't know how people are going to deal with lights. At some point, the 2 fixie blew through one and Dave and I took the more cautious route. We rode a steady pace down 3rd/2nd St. towards the river and hit the bridge at a good pace. I can say it was quite surreal, moving through UL traffic and downtown city traffic at 11.00p.m. on a Saturday night. We meet up with the 2 front-running fixies and waited the rest of the crew...and waited...and waited. Eventually host Jimmy and a friend showed, but the rest of the entire crew bailed! Crazy stuff. We remaining 6 rode down the ramp to the river where the other 4 set about drinking a bit more brew. At that point, I was finished. My twisted ankle was bothering me and I was further done from the brisk pace down to the river..and the Miller High Life sloshing in my stomach. I posited to Dave that I was the only member of this randy band who was experiencing heartburn during the ride from the beer intake.
At that point we meandered back towards the Highlands, me running on fumes. As a further "bizarre evening" note, we ran across 'Alberto', my friend from work across from his house. He was walking home from a friend's after his own birthday 1 or 2. And this at 12.45. After getting home I had that "been active late at night" awakeness. I iced the ankle and headed to bed around, which for me is a half-year record. Interesting all round.
p.s.- Found this eco-oriented site while goofing: TransitionKY. It's worth the look.
at October 11, 2009

Night rides are the cat's meow. Night rides with beeyah? Even better.

If you had a couple more beers your ankle would have been fine.