It's funny sitting here with my coffee in my wool sweater (made by my mother) and slippers at 9.35 on a snow day (kids are home, one in the basement playing videogames while talking to a friend via the magic of videogame technology and the other asleep indefinitely) that I could speak so enthusiastically about a ride with so many miserable moments, but that I do. Hosted by Apertome, four of us met up for what, for me, was one of my top adventures I've undertaken on two wheels, a ride bordering on "epic" for those of us who live in the mundane, non-mountainousness middle. We had chosen a date a month ago and Saturday found ourself facing winter storm watches and warning from the southern remnants of the storm that collapsed the Metrodome in Minneapolis.

The weather called for low 20s with windchills closer to 0F. I chose to go a little lighter up top to avoid the inevitable wet chills (foreshadowing) and though I dialed in the feet pretty well too (list at bottom of what I wore, mostly for my own purposes). Dave (writeup already posted) and I took one or two wrong turns b/c of my stupid GPS. I have a better sense of direction than those pieces of crap. Dave C and I met Michael and Dave G at The Hitchin' Post in Norman, IN and left for a 42m Figure-8, designed for Dave G's knee as he sometimes has trouble with it (foreshadowing), the route giving him 2 or 3 bail-outs as needed.

The opening miles were mundane save this intersection where we met this cold crowd of horses and mules. From there we turned right onto Polk Patch Rd and our first section of gravel. I was personally pleased at this point with my bike set-up, the C'dale 29-er with re-mounted Exiwolfs running at 38lb and the first big test for the Jones Loop bar. Dave G and Michael were both on mtbikes and Dave C was the lone LHT stalwart, he running Marathon snow studs. The first gravel sections felt good and relatively smooth underfoot. 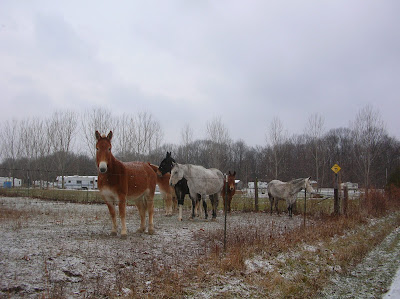 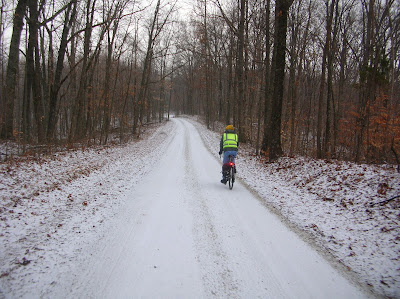 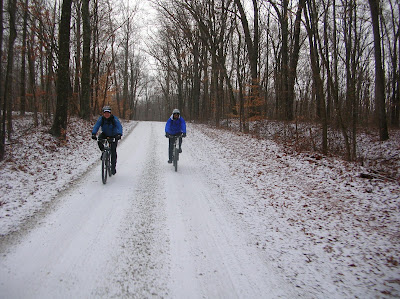 Descending PolkPatch towards a left turn we encountered our first drama of the day. Dave G had zoomed ahead, with me gingerly descending in the middle and Michael and Dave C just behind. I heard a noise of some sort and at the bottom DaveG and I waited for the other two, eventually to find Michael arriving with blood on his face. He had taken a face plant on the descent, cutting up his noise and scuffing his cheek. He got a good going-over from the nurses and we decided to soldier forth, checking up on our patient a few more times. Not one of us wanted to risk a swollen eye out in those conditions. We turned left onto Horse Camp Rd. and found 1.5m of up-n-down climbing. I must have felt fresh here b/c I don't remember much the 17% we rode at some point. 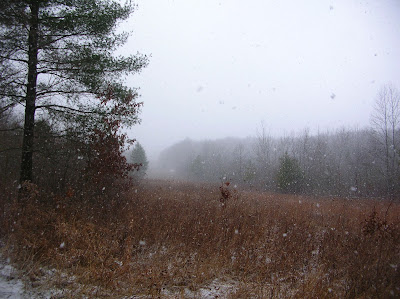 I can't pintpoint on our map (maybe McPike Branch at the western end?) where the pics below came from, but I really enjoyed the juxtaposition of snow, grass, fence, descent and such. I'm a sucker for grass pics; what can I say? This was a portion that Dave G told me intersected Nat'lForest and IN state lands. Further research is required b/c I'd love to return there during another season. 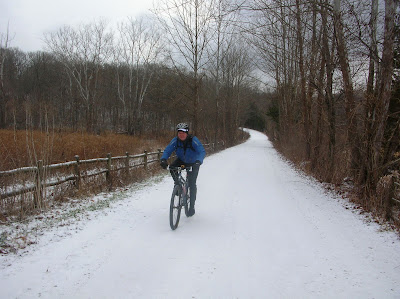 Our route turned south, *finally* giving us a tailwind and also some pavement. We began a new section of rougher gravel on Henderson Creek Rd. when shortly Michael stopped us to consult the GPS. We had missed our turn with Michael blaming me b/c I was talking about some kind of crap (I don't remember). We used the time for a snack stop during which DaveG brought out the best snack of all, some peppermint schnapps. I'm not a big liquor drinker, preferring my booze in rotten grape or hops form, but, Boy, that hit the spot! Thanks Dave G! Oh, and thanks Dave C b/c he had his trusty Combo's with him. They went down easier than the brick-hard Clif bar.

At this point I have to discuss some gear issues. During our snack stop I got rather chilled, especially in my torso. From this point on I had a hard time stopping b/c every time we did so, I got cold, uncomfortably so. Just Friday Michael wrote a post about the benefits and detriments of layers philosophies, his being that he strongly preferred a blend of synthetics and wool as opposed to only wool. Well, because I'm prone to philosophy following and RBW kool-ade drinking, I've entered the "wool crowd" of late and on this adventure I wore two layers of wool (including my excellent TJMaxx find) and a gore-tex jacket. With each stop I paid the penalty for the wool-only cold drenching. Once I got going it wasn't so bad, especially if I could find a good climb to heat me up, but after this ride I'll be experimenting with the Apertome Philosophy: synth base layer to wick away moisture, wool middle layer to insulate and whatev jacket.

We climbed back up Hickory Grove and made a nice 10m run of ridge-top gravelling through the forest, during which we found worsening, snowy conditions and slick surfaces. The ride was becoming "epic". My pictures were scarce through this portion b/c the hands became quite cold handling the camera gloveless. Once we descended out of the forest we ran into some civilization and flat pavement just west of Houston, the pavement at this point becoming snow-covered in spots, even virgin snow cover, something I rarely find in Louisville after a snow. 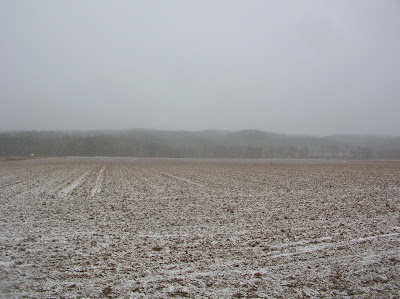 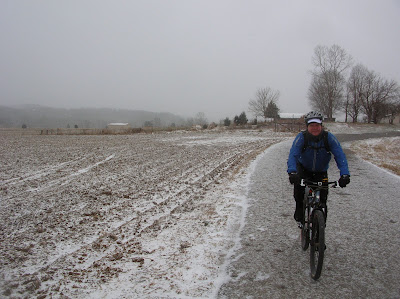 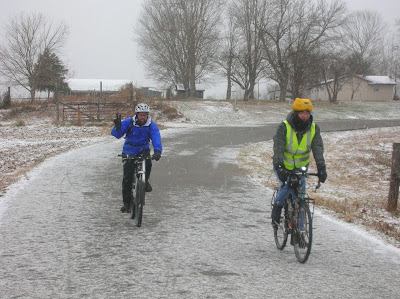 From here, cold and creaky, we turned south for a spectacular run along Buffalo Pike. After some flattish portions we went straight up along a .5m climb punctuated with 13% portions. Honestly, I felt great up this climb. Micheal had plunged ahead and I settled down into a very, slow, almost meditative rhythm, using my smallest gear. I never went into the red but also had to focus to keep my footing, so to speak. 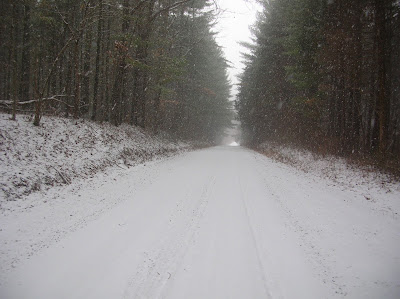 From the top of this point we began to think about the end, and how to best achieve that. Dave G's knee was acting up and we needed an efficient means of getting us back in one piece. If not his knee, it would be my cold feet and sometimes cold torso. I felt bad at some point b/c Dave G was (k)needing to ride at his own tempo, but that tempo made me cold, so I had to up it myself. For portions of the ride we had two distinct grupettos, Michael and me and the 2 Daves. I don't like to separate up small groups; at points during our BigSouthFork trip Michael and Dave C could have easily left my ass lying on the side of the road. This time, Dave C was an awesome ride companion and helped Dave G's balky knee move along.

We took a left turn towards smoother roads and then turned onto 58 at Kurtz. At this point it was nothing more or less than making it back in one piece. I think each of us was fighting our own battle with the cold, snow, terrain and most importantly, wind which we found once onto 58.  The road was mostly covered and I drifted to riding about 15-30sec behind Michael. The wind and grade were making me forget my feet, which were miserably cold as much as my torso. The long-term review is that SealSkinz aren't that impressive. I'd have rather had an extra layer of wool with a grocery sack. Another niggler was the Jones bars. I love the design, but they tend to slip down making for an awkward angle. I'm in dire need of a hearty non-slip shim. We then encountered our last impediment, up the 58 hill and into Norman. The map later revealed that from Kurtz we did two small hills and then a false flat towards Norman until the final .3m climb, a brutal section directly into the wind. Whew!

Michael and I finished and started warming the cars up for both our benefit and the Daves once they arrived. Their challenge up the hill was having to hop the guardrail to steer clear of the state plow coming through at the time. We debated eating in Norman- they had closed though- so we headed to eat at our original choice, the 58 Cafe in Kurtz, only to find that it had closed due to the conditions. It was an unfortunate way to end a spectacular day on the bike. We went our separate ways and DaveC and I ate some fast food in Brownstown on the way home. It wasn't always pleasant, but for me at least it was very satisfying, at least here in my warm and cozy slippers and sweater looking outside at the cold, white terrain.

What I wore for science sake:
head- fleece balaclava (wanted to use my PearlIzumi skullcap and neck gaiter but couldn't find it). This gets annoying after a while b/c you can't access your mouth very easily

feet- thickish wool, SealSkinz, "ladyboots" snow boots- er, No. Back to the drawing boards for this.

hands- Lobsters, as always- Not great for taking off repeatedly for pictures, but if they stay on, they're warm.
at December 13, 2010

As for your torso, that's very much as I used to dress, except that I wore a synthetic base layer to avoid a scorching case of runner's nipple. I used to get soaked, and it's the reason I had to drop out of last year's snow race in spite of the single-digit temps. (See here and here.)

A commenter on my blog suggested I ditch the Gore jacket and linked to this article about cold weather and exertion. I've since been riding with just a skin-tight Under Armor Cold Gear 2.0 baselayer (on sale at TJ Maxx for $25), armwarmers and Mountain Hard Wear "Transition Super Power" soft shell jacket on the torso. Much, much better. Sometimes my belly gets kind of sweaty if temps are above 20, but if I remember to unzip for a while that doesn't become a huge problem.

Excellent. My kind of ride.
What was the total time commitment?
Nice job!

Total time, Patrick. I picked Dave up at 8.00 and we arrived back at his house at 6.00. The trip could have been 30min to an hour shorter maybe, depending on time/stop management, but not really. We all were riding at our max mostly the entire time.

thanks 'sconny. I'll definitely take a look at the article. After yesterday I don't want to feel that temp combo again.

We've got a little ramble planned down here for next Saturday. If the weather conditions are like what you described, I'll be handing people maps and going back to my fireplace.

I can't for the life of me decide if this was fun or not. An adventure for sure, but fun? Not like riding along the ocean on a warm summer day, but fun in it's own way, I'm sure.

It is fun. Once you're dressed for it, and get moving, you can be comfortable.

We all had our temperature issues (mine were feet), but you adjust you clothing choices for the next time.