post...with a picture of Ned

It's pretty sad that the impetus to do an actual post with pictures- which I think makes posts interesting as opposed to a wash of letters- is due to waking up at 3.30am. It feels like I've done little to nothing with the blog of late, although I do have 8 posts in 20 days. But do they say anything other than, "I'm not riding much", "I'm jogging a bit" or "why am I so fat?" blah blah? Ultimately, my recent exercise efforts have been geared in a different direction than they were in '11, my highest mileage year. While not on par with some of my cohorts, I became mileage greedy last year (I won't put myself up to "mileage whore" status until my miles top 5k). Last year this time I had three 30m rides, two 20m rides and several training 18s. This year, as of 1/19 my longest ride has been 18.6. That said, of the 19 days in January so far (not counting this early morning), I've exercised 17 of them. As recently discussed, I've thrown in walking and jogging along with some 1hr fitness riding and the results are positive. I'm down 5lbs from the start of the year. As any of you cyclists know, big miles means a big appetite, which is how in 2011 I could have a banner 4.5k mileage year but still end up 15lbs+ heavier by the end of the year. So, if weight loss means fewer miles and a better calorie-burn balance, then I'm all for it.


This past Sunday was the Masters World Cyclocross Championships here in Louisville, a dress rehearsal for the real 'Cross Worlds here next year. Having attended several previous races including the USGP series here I was a bit underwhelmed, no, a lot underwhelmed. The crowds were non-existent and the "show" even more so. No music. Minimal to no food. No Belgian beer and frites. The weather turned out pretty miserable in that the middle of the week offered lots of rain, muddying up the course, thereby making all 'cross racers elated, right? Then a snow/freeze thing moved in Friday and the mud turned into impossible mud ruts. These pics are from a Sunday stroll when I went out, got some coffee-to-go from Breadworks in my nifty Kleen Kanteen double-walled thermos (Get One!) and met Barturtle down at the venue to take things in. We stayed a couple hours goofing around and I eventually ran into Nathan, who used to work at Clarksville Schwinn and now is a big-wig for Zipp. Ironically, I had ridden the Crosscheck down there and it was Nate who sold it to me, he thinks in the first edition year of the run. The highlight was seeing Deadly Nedly, American hero Ned Overend participate in what I believe is his first world 'cross championship, coming 22 years after winning the first mountain bike championship in Durango in 1990. I didn't know until recently that Ned owns Boure cyclingware clothing, something Patrick rides in. 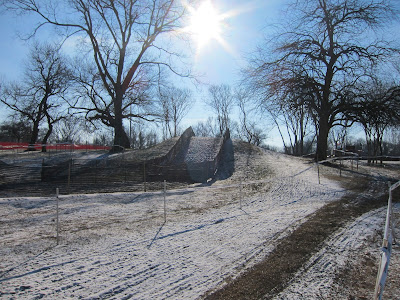 Run up. Very chunky at this point. 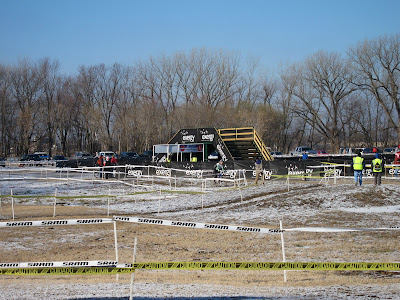 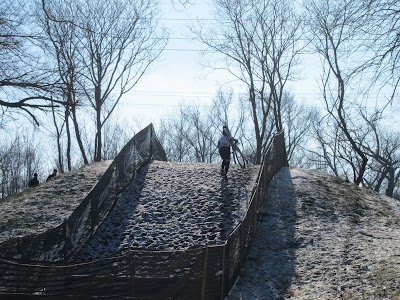 An "experienced" woman who could prolly kick my ass. The classes were mixed so I don't know who this actually is. 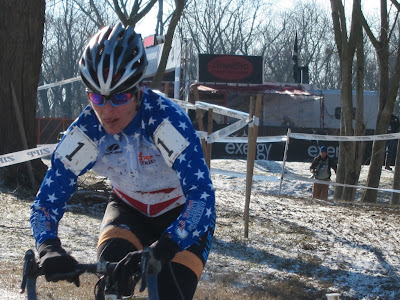 I believe this is the same woman, and if you notice she's already in stars-n-stripes- a Nat'l Champeen- and she is en route to her rainbow jersey. Gggrrrrr! 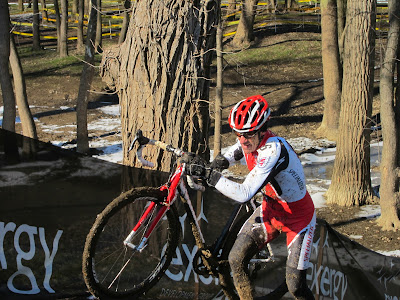 Ned Overend, Deadly Nedly, in the "flesh", which is to say his lack of flesh is one marker of why he's been a cycling champeen at so many levels for so long. Along with Greg Lemond, this guy IS American cycling. Yes, the One-Nut guy has a bigger name, but asked a long-time fan. This guy set the stage. Can't forget to throw a 'Tomes reference in there either.


After seeing Deadly Nedly take a fall and work hard to catch up, we left- cold hands mostly- and made a stop at the newish Against the Grain brewpub downtown at Slugger Field. After being often underwhelmed at some of our other locals I really enjoyed the IPA and black APA I tried there. And the beer cheese was REALLY good.

Last night I had a brief window and hustled out for some "tempo" miles during L's sax lesson. I say "tempo" instead of tempo b/c my "tempo" seems to be legato. Like my recent effort out of Sawyer, I can ride hard but the speed just isn't there. It's a bit deflating, but that's life. Perhaps I need to work my base back up, because I want to get Stomping Legs again and I haven't really had those since this past Fall.

I'm with you on the winter season longing for fitness. I took the overgeared (for me) QB out into the wind and was humbled. I'm calling a workout. Not training exactly, but a workout none the less.