the mileage confusion stems from the fact that i popped the computer out for a moment when i rode around a parking lot at a church, and of course, forgot to pop it back on for a few miles. this is a pretty fair guesstimate, if not a little short.

BTW, boy did i take an ass-whooping today. not unlike the country ride i took out of Lexington a few weeks ago, i'm finding that my fitness is not matching my desire to take interesting rides. the good wife and L had to pick Z up from camp in SouthCentralKY, so i made plans for them to drop me off in Harrodsburg for a ride. then they picked me up on the return. i had big plans to get a solid ride on empty roads, building on a little bit of fitness i've gained of late with more regular riding. i also had the goal of going by a farm outside of Dixville, KY, one purchased somewhat recently by a school teacher friend.

to plan the route in an area about which i know nothing whatsoever, i consulted two sources,first my fav Delorme Atlas KY. anyone here who doesn't use the Delorme for your state, you're missing something. they're much closer to the Michelin maps i've used for Europe, more precise, more detailed, really much better allround than those peicesofcrap Rand-McNallys. Now, of course, you techies can use Googlemaps to get the same thing done, and maybe done better. i have nary the dialupspeed or the system oomph to make good use of the Google offerings. as much as anything, i built the ride out of a ride outlined by Joe Ward in his book "Wheeling around the Bluegrass", the "Harrodsburg-Cornishville" ride. one highlight is this old mill found on the banks of the Chaplin river. his book is locally published, so not easy to get. it offers 25 rides the central Bluegrass region of Kentucky. i borrowed part of his, and part of my goal to get to Dixville, a decision that would prove slightly ominous.

i woke up and didn't feel all that well, maybe too much wine, not enough sleep, poor diet (pizza last night, which should've been alright being carbo-heavy). don't know, but i was looking for excuses. yes, i'm lazy, but sometimes my body tells me to lay low. nevertheless, i ventured forth.

this area is not unlike the other rural KY areas i've ridden in this summer- craggy, constantly-rolling, creek to creek to creek riding. climb out of the creek, go down the next. you get the idea. i traversed an area intersected often by the Chaplin River and Dry Creek. though one is a 'river', and the other a 'creek', they seemed about the same size to me. so there was a little flat in there on occassion. i don't know, but i was looking at my watch within the first half hour. the descent down to my friend's farm was thrilling; it would've been the steepest climb of the day. by the end of the first hour i was running out of gas. now the ominous part mentioned above. i remembered from reading Mr. Ward's description that there were "several country stores" on the route. with my energy fading, a country store with some gatorade and a snack would be exactly what i needed. well, apparently, the stores were on the part of the route i didn't take, henceforth, no stores. no energy. and a 1-hour march back to town. oh, and i actually did march- er walk- not once but twice, up nastyass steep hills. i was done.

i sit here at 6.30p.m. in the midst of a big summer lightening storm and i still feel it in my muscles and bones. tough day. 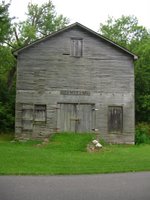 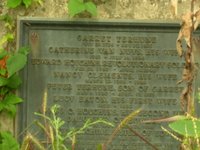 
**gonna add some more pics later, but connection slowed down. these are good. Harrodsburg was the first permanent settlement west of the Appalachians, which of course excludes native settlements and anything from the Spanish.
at July 21, 2006

Here are some links that I believe will be interested

Your are Nice. And so is your site! Maybe you need some more pictures. Will return in the near future.
»

Great site loved it alot, will come back and visit again.
»