Following up on a comment on his blog The Fat Guy, I rode today with David from Charlestown. He gained minor celebrity here in the 'Ville for a fun piece discussing him on one of the local news channels. David sometimes/regularly commutes from Charlestown to Louisville and back for a 32m commute. Great stuff there! As a further note, David has lost something like 70lbs in the last year. I daresay he's my hero! I joined him in Charlestown to explore some lesser known roads on my end. I always love to explore, so David agreed to ride lead.

We left Charlestown at 22F, so both of us were quite bundled up. I especially liked his black leather coat. You can pull that kind of thing off on a 'bent, which in his case is a Baccetta. Our route today, seen below on the map, took us up north of Charlestown and back south via many twisty, curvy, windy, hilly, rural roads. The biggest challenge this a.m. was gauging the condition of the road. After yesterday's flurries and sometimes icy conditions- in certain parts of the city- the IN roads challenged us with some black ice, white ice, snow and slush. The conditions improved after an hour's worth of sun, but it made the early descents into shaded creek valleys a bare-knuckle event.

David chose a nice route, with many emtpy roads and one that avoided any real traffic save the final miles back in Charlestown. I thank him for the effort and hope to ride again in area. 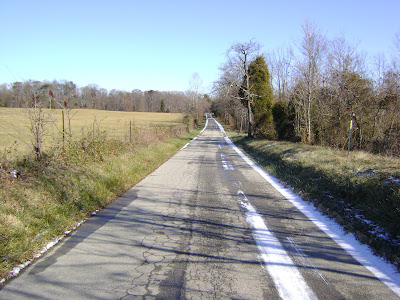 Nice rural riding with a bit of snow thrown in. We saw a deer cross the road as I took this pic. 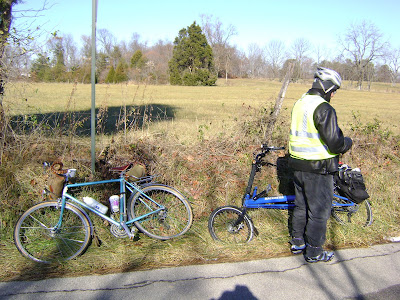 Bleriot on side, and David with Baccetta 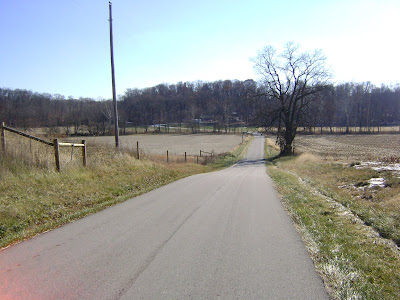 I forget the name of the road, but I certainly enjoyed this descent into the creek valley. David is almost at the bridge in the distance. and check out the strange orange/red splash in the bottom left corner. Spooky. 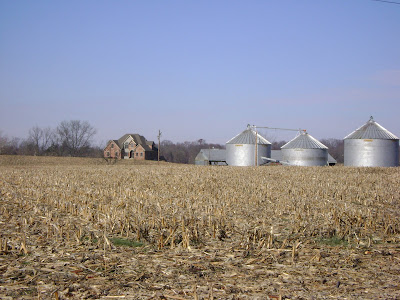 Ridiculous juxtaposition in field near Charlestown, that of the new McMansion quite near grain silos. As best as I could tell, they were serviced by the same drivewway.

Looks like a fun ride. I like how the Bleriot always gets the call for your rides in the country despite the vast choices of bikes you have. As it should be.

I agree, Doug. As it should be. It just everything right on those rides.