Well, if I learned anything from the S24O, it's that the Troll is a perfectly stable ride for touring if, IF, I ride with a balanced load. I know. I KNOW. This is logical and doesn't seem debatable, but it's easy to get roped into a "low-trail, high-trail, rear-loader" caterwaul of a tour load argument. My experiences with the Troll at some measure of load were based on:


I considered the third to be the most important, one based on lots of hilly miles and the mixed terrain I cherish. The bike had developed a nasty shimmy which scared me from riding it. I was finished.

Well. I tried to sell the frame and had some suitable suitors, but none bit the bullet so I decided to rebuild and get some use out of it. This time, to test the "balanced load" theory I borrowed Patrick's OMM low-rider rack to share the lbs. wealth across front and back. Results?

Nothing short of shocking. Shimmy? Gone. Wiggles? Gone. Fear? Gone. This bike likes a balanced, low load and rides predictably with one. I feel sort of stupid for not having gone through some further testing before taking the damn bike apart, but live and learn. I will have to beg and plead for a Xmas gift of one of the low-riders. It mounts easily and seems solid with the triangulating brace. I'm a fan.

I wish the frame were one size bigger, but that may have negative impact as well. I'll take it as it.

Front and balanced-loaded this time. 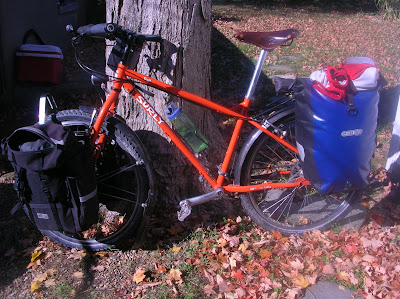 Glad to hear that spreading out the load really helped.

You may also want to look at the new Tubus Tara Big Apple.

As high as those front bags are riding, you could probably get away with something like a Surly Nice Front or Jandd Extreme. I wouldn't blame you one bit if you held out for an OMM, though.

@Loveless, you think these are still riding high? There were on lower bar. Surly Nice Rack, no way. Thing could carry a car. I should look at janky Jandd products. PatJohnson swears by their panniers.